I heard from another member of this community that the throttle body, among other things, has the ability to change the power curve of the engine.

What exactly is a throttle body?

For a gasoline engine, the throttle body (TB) is the mechanism which controls the flow of air into a fuel injected engine. It is the "front door" if you will. Inside of most TBs you'll find at least one butterfly valve. There will usually be a main rod going through the center of the butterfly valve which allows the butterfly to open and allow air to flow into it. The butterfly can be controlled by a cable (aka: drive by cable or DBC) or more recently is controlled by wire (aka: drive by wire or DBW), meaning the computer (ECU). Some TBs have a single butterfly, while others have dual (two butterflies attached and actuated by the same rod). I'm sure they might even be some out there with even more than that. 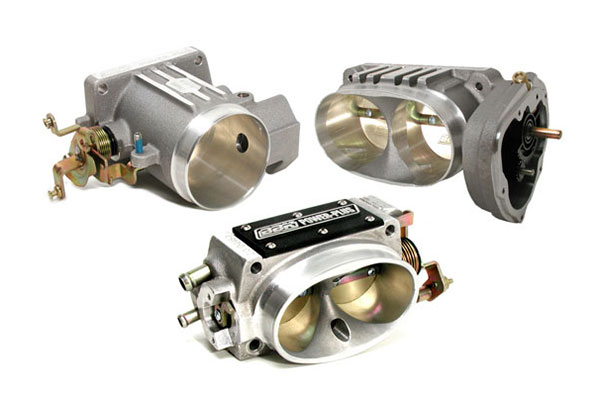 How might the throttle body effect the power curve of the engine?

In very simple terms, the TB is just a restriction in the intake. Without something like it in the way of air getting into the system, the engine would run up to it's maximum (if it had the fuel as well) and would soon self destruct. It'd be called a runaway in the diesel engine world.

Since the TB is just a restriction, when we open the butterflies, the TB can allow a certain amount of air in. Usually, the larger the bore (or opening of the TB itself) the more air can pass through. In SAE terms, this is usually measure in cubic feet per minute (CFM). A larger TB can flow more CFM. How this might affect the power curve of an engine is by allowing the engine to take in a larger amount of air. If an engine can take in more air, it can potentially have a higher RPM and thus a great chance for more power output.

You may be wondering why I highlighted potentially in the above paragraph. The reason is, even with a larger TB, the engine will only be able to use as much air as it can use and no more. Adding a larger TB is only one small piece in the puzzle for affecting the power curve of the engine. If an engine cannot use more air, buying a new or larger TB isn't going to automatically be granting the engine more power or allow it to change the power curve.

Not the answer you're looking for? Browse other questions tagged engine car engine-theory throttle throttle-body or ask your own question.

2
Why might you choose to change to using an aftermarket throttle body?

2
Automatic Throttle Body and TPS on a Manual
7
What exactly is meant by "engine coolant"?
12
How does intake manifold runner length effect the power curve of a car?
7
How can head port volume affect the power curve of an engine?
2
Why might you choose to change to using an aftermarket throttle body?
9
Why Does Coolant Flow Through the IAC and Throttle Body
8
ITBs with a charged engine
0
Spark advance massively retarded after cleaning MAF sensor and throttle body