A couple of days back I noticed my 2011 Yamaha Scorpio had begun leaking fuel whilst parked up.

Upon close inspection it was just a slow drip coming from a tube near the rear of the bike.

After searching around it appears that I may have a "stuck float".

I've tried tapping the fuel bowls with the end of a screw driver, but I'm either not rapping them sharply enough or it isn't doing the trick.

I'm not very mechanically minded, nor do I have many tools to try taking the carburetor off and fixing it myself - so before I take it in to get a mechanic to take a look, is there a way to stop the leak?

I tried turning off my fuel line before, turning the dial from on to off, however after an hour this had little to no effect on the dripping coming from the pipe.

Is there anything else I can do in the meantime to prevent the leak before getting it looked at?

This is the pipe that is leaking: 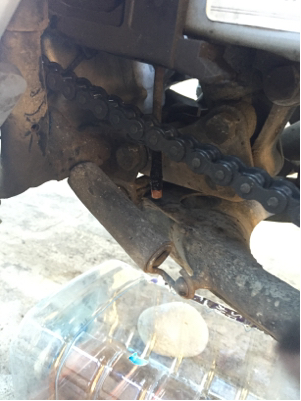 And this is where it feeds in to if I trace it back: 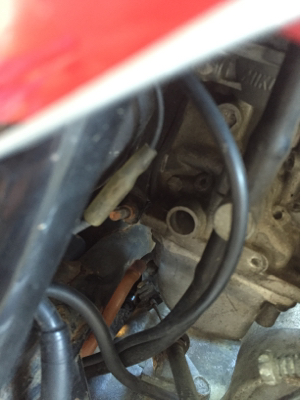 The best thing to do is remove and examine the carburetor. Take it apart, clean up all the gunked fuel (varnish), test the float, adjust it as required. Examine the float needle and seat and rebuild as required. The fuel level should be between 2.7 and 4.7 mm below the float chamber casting split line.

As you doubted the trouble was with the float.

Not the answer you're looking for? Browse other questions tagged carburetor fuel-tank scooter fuel-line or ask your own question.