What mechanical action is heel and toe (clutchless) shifting trying to accomplish?

I've worn through the floor mat in two places trying to become better at heel and toe-ing, though.

I've heard much and recently watched a video about performing the heel-and-toe technique.

I understand that it's to allow you to shift without the use of a clutch, but it eludes me how placing a foot on both the brake and gas pedal will cause the synchros to line up. Can someone explain the principle of what's going on?

My question is: Why does heel and toe shifting line up the synchros?

By matching the engine RPM to the revs in the gearbox, the 'synchro rings' that automatically match the gear speeds in the gearbox for you have less to do.

If you are clutchless changing all the time these wear out quickly since you are unlikely to match gear speeds well every time. When you din't the synchro rings an gears have to match the speed of the engine and clutch at the same time, normally a function of the clutch when you make a jerky change.

Bits of metal and filings from the gears also result from mismatch and may go on to cause further damage to the gearbox.

You can save a lot of wear and tear and expense on these parts by 'heel and toe'ing.

This is one of the reasons formula one cars of the past were completely rebuilt every race (Thanks @ducattikiller) . Components were used near their limits and a bad change or two by a driver often resulted in a breakdown and uncompleted race. Commonplace 20 years ago, less frequent now with new gearbox designs and rules.

Old cars that 'grate' gears when shifting down (it's more noticeable shifting down) have worn out synchro rings.

Something to watch for in purchasing second hand car - shift down after pressing the clutch in for a long time.

Heel-Toe shifting and clutchless shifting are 2 different things. I guess they can be done together....

The one thing both of these techniques have in common is rev matching. There is the RPM you are at when you come out of a gear, and the RPM you will be at when you go into the next (or previous) gear. When you rev match, you try and have the engine RPM as close as possible to where it will be after you let the clutch out. This can help to reduce clutch wear and jerking when you let out the clutch.

Clutchless:
Shift gears without touching the clutch. If you are shifting up, just move the shifter, when the RPM is close enough, you should be able to slide it into the next gear. When downshifting, you need to rev the engine to match the RPM.

Heel-Toe:
The goal is to apply the brakes, and downshift with rev matching. Place the ball of your foot on the brake pedal, press in the clutch, with the right side of your foot hit the gas, shift, release the clutch. This is a lot to do all at once and takes a bit of practice. You might want to try just rev matching first so you get an idea of how much gas you need to give it. Some cars are easier to heel-toe than others and there are pedals designed for heel-toe shifting.

I'm going to expand on rpmerf's answer, where he has disambiguated between Heel and toe and clutchless shifting.
I'l briefly explain the driving technique only to better illustrate what it hopes to mechanically achieve. And so, please excuse me if get the nuance of the technique wrong.

Here's an image of a gearbox. I couldn't find a one with synchromesh, just assume that it goes where the DOG GEARS are. 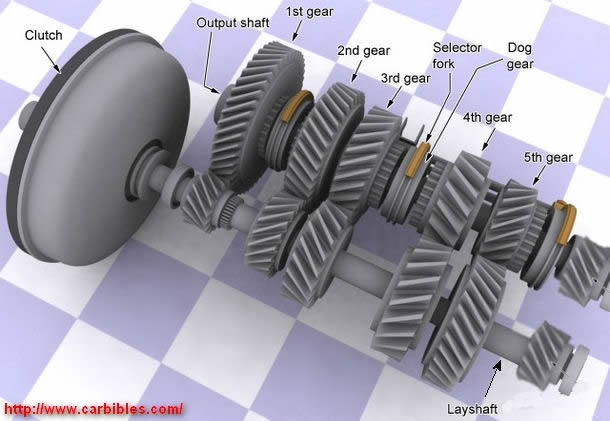 HEEL AND TOE - This is a driving technique for DOWNSHIFTING while BRAKING.
The point of doing this is REV-MATCHING the engine with the new transmission speed after engaging a lower gear and doesn't help the synchromesh unless you're DOUBLE CLUTCHING as well.

Mechanically - point 2 . While downshifting, let's assume that the time spent on moving the gear lever is negligible, the engine needs to pick up speed to match the rotational speed of the gear shaft, which is , for the same road speed, now higher than the previous gear. Slowly engaging the clutch would have done the same thing. By applying a commensurate throttle, you've aided this rev-matching process which was left to the clutch alone, and completed the shift in an admitidly shorter time. -
Benefits-
Faster shift - lesser time spent in between gears is good for all sorts of reasons, one of which is having consistent engine braking.
Alleviate clutch abuse - Apart from wear, you significantly reduce driveline shock that can result from quickly releasing the clutch.
Everything above apply's when you just want to shift down and don't have a need to brake. All you do is omit the braking part, and keep the rev matching part i.e clutch , rev-match and shift, release clutch.

DOUBLE CLUTCHING
This is what you want to do if -
1. you want to reduce your synchro wear
2. your synchro's are already worn 3. your vehicle doesn't have synchro's (old vehicles, and some between the 1st and 2nd gear) . No synchros on reverse gear either. but since one is stationary while engaging reverse, you're already rev-matched. Try reving in neutral and quickly engaging reverse and you'l hear a grinding noise.

By double clutching, you're trying to REV MATCH the lay shaft/neutral shaft, which on a constant mesh gear box is constantly meshed with all your gears, to the OUTPUT SHAFT , which is connected to the synchromesh and mates to the selected gear.

DOWNSHIFTING
If performed while braking, it'l be DOUBLE CLUTCHING WITH HEEL AND TOE. i'm only going illustrate the double clutching process.

Again , in practice, it's easier to blip the throttle than to hold a constant rpm when the engine is free- revving. Hence, depending on the speed of the shift, one may

A clutchless shift isn't commonly done on a transmission with synchro's. It can lead to premature synchro wear even if the shift feels smooth.

Clutchless shifting can be done in CONSTANT MESH GEARBOX with dog gears both up and down. It helps if the shifting mechanism is SEQUENTIAL and the rotational inertia of the transmission is low. Though, all that's another topic.

Not the answer you're looking for? Browse other questions tagged clutch shifting or ask your own question.

11
difference between mechanical and hydraulic clutches
10
Fuel efficiency and Shifting/RPM
4
Honda Accord Jerks when shifting gears and makes grinding sound?
4
Clutchless shifting and long term maintenance
5
Is my gas pedal long enough to enable heel-and-toe shifting?
1
Honda Fit clutch hard on the knees?
2
What caused my manual transmission to rev while shifting gears and now won't go at all?