Why or why not increase engine efficiency by running the car "fuel-lean" (using a turbo or supercharger)?

Everyone wants their cars to use less fuel, right? I read the following passage about running the car fuel lean from this website:

Run the engine fuel-lean, that is, use excess air. It is well known that fuel-lean running improves the efficiency. In the old days, under cruising conditions, the engines always ran lean – about 15% excess air -- this was economical. So what happen to change this? The problem is the three-way (CO, UHC, NOx) catalyst used on engine exhausts. This only works if the engine air/fuel ratio (by mass) is stoichiometric (chemically correct). For gasoline this ratio is 14.6:1. The engine computer, acting in concert with the engine air flow sensor, electronic fuel injectors, and exhaust oxygen sensor, maintains the stoichiometric ratio for most of your driving. Only at this ratio can the catalyst both oxidize the CO and UHC (to CO2 and H2O) and chemically reduce the NOx (to N2). (UHC = unburned hydrocarbons.) What humankind needs is a lean-NOx catalyst. Then we could have increased efficiency and continue to be clean!

This passage seems to make total sense. Use more air and increase fuel efficiency. However, I don't understand why the catalytic converter can't handle or be adapted to handle more air in the engine.

What are the advantages and disadvantages to forcing air in to the engine by means of a turbo or supercharger that would justify a car doing or not doing it?

I believe the source of the misunderstanding is in how the term "lean" is being interpreted.

This is why @cdunn is right; the presence of a turbocharger or supercharger doesn't impact the ability of an appropriately-sized catalytic converter from doing its job.

So why is it not good for cats to run lean?

A catalytic converter is designed to scrub harmful gases out of exhaust gases. It does this through a chemical reaction that involves the presence of catalyst(s).

The most popular type of cat design today is the three-way catalytic converter, which handles three types of harmful gases:

The catch is that cats work well in a narrow AFR window, as this image shows: 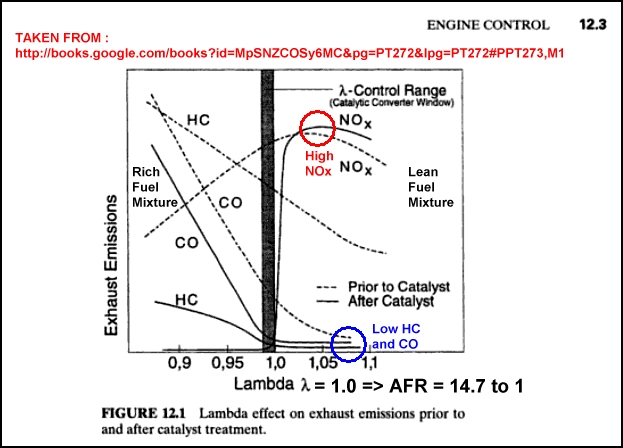 The three-way catalytic converter fitted to gasoline vehicles can't operate under lean engine conditions because the reaction of NOx to nitrogen and oxygen is a reduction reaction, and for this to occur there needs to be a corresponding oxidation. In the three-way catalyst that is the oxidation of CO and hydrocarbons to CO2. If excess oxygen was present then the oxygen, rather than the NOx would act as the oxidising agent for CO and HCs - because it's a more powerful oxidising agent - and the NOx would remain unreacted.

Technology for reducing NOx without the presence of corresponding oxidisable gases in the engine exhaust does exist and is increasingly used on diesel engines, which do run lean. However it needs more equipment in the vehicle, adding cost and complexity, and some approaches require an additive which needs to be replenished as it's used up.

Lean burn technology has been used in gasoline engines in the past, but perhaps failed to catch on because of the tightening regulations on NOx emissions - it may make a reappearance as NOx reduction technology becomes more established.

Advantages and disadvantages of turbochargers and superchargers

Using a turbocharger or supercharger allows more power output for the same engine displacement - or, a smaller engine displacement for the same power output. This means the engine can be smaller and lighter, and smaller cylinders have lower friction losses. The latest small gasoline engines such as Ford's Ecoboost range typically use both supercharging and turbocharging to give high fuel efficiency.

The main disadvantage of turbocharging or supercharging is the added complexity and cost of the equipment, but this is increasingly seen as worthwhile for the efficiency gains.

As for advantages for turbo boost and supercharging, it's not just air that being increased, it's the air fuel mixture in correct proportion that's being increased. More air / fuel for every power stroke gives you more power. Disadvantage of turbochargers is that with the wrong design it will provide lots of power, but that power will lag the throttle.

The disadvantage of superchargers is that they are driven by the crankshaft through a belt which means they consume some power to do their job. They clearly produce more power than they consume, but it's still reduced by however much it consumes. Because turbochargers are driven by exhaust gases, their only side effect is a slight back pressure.

One other reason not to do this on your street car is that it will decrease your mileage (faster fuel consumption), and the additional power will put wear and tear on an engine that may or may not have been designed to handle it.

One additional point to touch on is that leaner and richer are relative to what conditions the engine already runs under. In terms of chemical reactions, car engines tend to run a little rich by default -- more fuel than is needed for all of the air -- because it reduces the frequency of detonations in the mixture.

If you alter things so they run leaner than the designed operation conditions, you may move into stoichiometric combustion. This means that all the fuel is consumed by all the air and the reactions are exactly balanced. This is also to detonations. This results in pinging (or knocking) and damage to the cylinders and pistons. If you change things to make it more lean by enough to move beyond the stoichiometric ratio, the threat of detonation is reduced but if you move too lean, you will increase the rate of misfires -- more damage to the engine (and the catalytic converter).

Running a lean mixture by itself isn't necessarily going to cause detonation, pinging or knocking. WW2 era old timer piston aircraft pilots used to run seriously lean mixtures on long hauls to increase range and it was safe to do so when they were at cruising altitude and power settings. You'd never consider doing it in a climb or at a high power though.

With an automotive engine, you'd have to have adaptive programming that would adjust the mixture from rich to lean depending on what level of load the engine was under. On a long haul, level roadway at steady highway speeds, you could probably run lean a good amount of the time, but for your typical city style stop and go, or hilly terrain, you'd probably never be in a power range where it would be safe, efficient or effective.

As for emissions, running lean definitely does create Nitrogen Oxides, so that may be of added concern in smog prone areas.

There is an additional reason for not running lean, which applies very well to turbocharged engines - the extra fuel creates a 'boundary layer' between the combustion products and the cylinder wall. This absorbs extra heat during combustion to help keep the chamber temperature within tolerance.

Modded cars that run very high turbo/supercharger boost are frequently on the point of running too lean, in that the injectors cannot supply sufficient fuel to maintain this boundary layer, and the combustion chamber pressure/temperature increases. In extreme cases this results in detonation/knocking, and under high boost can cause physical piston damage.

Good question. The answer is that to eliminate non-CO2 emissions and deliver reasonable efficiency and power an engine MUST burn the fuel explosively and rich just before TDC, then burn it again lean after TDC, and finally burn it a third time after the charge has left the fast combustion cylinder and entered the less hot and slower re-expansion cylinder.

17
How exactly does running fuel-lean increase the temperature of ignition?
16
How can I tell if I have bad cats?
11
What exactly is a catalytic converter and why does it need to operate within a certain range?

6
Is it feasible to Turbo a NA engine while maintaining 87 AKI octane fuel use?
3
Engine Revving/Misfiring - Formerly Running Lean - No Trouble Codes Now
13
How does ambient temperature affect engine efficiency and fuel consumption?
8
Why does a petrol engine need to maintain an air-fuel ratio, while a diesel engine doesn't?
4
Percent of Air and Fuel used for Combustion
7
Given that one of the reasons diesel engine produce black smoke is overfueling, why do diesel dragster produce so much soot?
12
What's the meaning of a "lean" vs "rich" air fuel mixture
29
We have fuel injection, why not air injection?
4
Effect of smoke ingestion on fuel injected car engine?
1
How accurate is the air-fuel-ratio set by the ECU?