What is a governor and what is it used for?

I was watching a classic car restoration program on YouTube in which they were working on a '50s Cadillac with an automatic transmission.

The mechanic in the video diagnosed a transmission glitch as a problem with the "governor" that was sticking due to the buildup of crud.

I don't see this part mentioned in the context of modern automatic transmissions.

What is the role of the governor in these all-mechanical transmissions and why are they not used in modern transmissions?

Line pressure is generated with the front pump of the transmission. It is used to actuate clutches and bands.

Governor pressure is similar to throttle pressure in that it is a derivative of line pressure but it is generated relative to the speed of the vehicle. Normally the governor is in or near the tail shaft of the transmission. The governor has a set of fly weights (like centripetal advance in a distributor). As you drive faster the weights fly out more closing the valve and raising pressure. 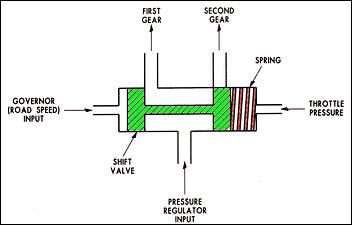 Finally everything comes together. The transmission uses spool valves to shift. When at rest and not on the throttle the governor and throttle pressures are zero and the transmission is in firs gear. The spool valve is held in the first gear position with a spring. Now you take your foot off the break but don't hit the gas. The car will slowly speed up and the governor pressure will go up. When the governor pressure is high enough it will overcome the spring and slide the spool valve over turning off first gear and turning on second gear.

Even with the engine being computer controlled the first piece of electronics that made it into the transmission is the torque converter clutch (TCC) solenoid. The TCC should only come on when the engine is warm and there is no good way to give that input to the transmission. Since the engine computer already knows the engine temperature, vehicle speed and throttle position it can activate the TCC.

While the engine drivability was constantly improving the transmission lacked something to be desired. The valve body (housing that contains the spool valves) constantly got more complicated with shuttle valves and accumulators and other things to improve the shift quality. Eventually all of the controls of the transmission become electronic.

With electronic controls the vehicle speed and throttle position is read into the computer (engine or transmission depending on the vehicle). The computer then decides when to shift. To shift, the computer activates solenoids to turn gears on and off. This greatly improved the quality of the shifts because the computer can keep track of how the transmission is shifting and then compensate for any shortcomings. The computer pulse width modulates the solenoids and by controlling the duty cycle can change the speed of the gear turning on. This can change how soft or stiff the shift is. Also by monitoring how quickly the gears engage the computer can choose when to turn the gear on. Chrysler calls this monitoring clutch volume index (CVI).

Not the answer you're looking for? Browse other questions tagged automatic-transmission or ask your own question.

8
How come gears don’t normally change in an automatic car?

11
I'm stupid and added tranny fluid to my coolant tank. What can I expect?
7
What is ECT Mode for? - Toyota Cars?
4
What are MDLA and MDMA?
7
What is the difference between an automatic and an AMT
2
What is this thing behind my oilpan and is it bad that it's cracked?
8
What is the Connection Between Failing Torque Converters and Vibration?
11
What are the “1” and “2” or “L” gears used for on an automatic?
2
Honda 2.4 VTEC (2002 CRV): Throwing code P1259 after doing a lot of work on it this weekend