Why do two-stroke engine exhaust pipes look so strange?

Two stroke gasoline engine exhaust pipes are shaped strange. They expand into a wide diameter and then shrink down to a very small diameter where the exhaust gasses emerge into the environment.

- Why are they shaped in such a strange way?

- What is the large expansion in the exhaust pipe for?

- Why does the diameter reduce so dramatically at the end? 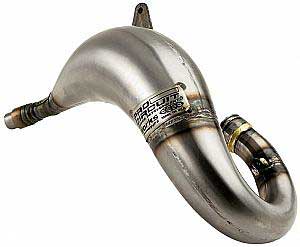 While moving downwards after ignition, the piston exposes the exhaust opening, and the burned gas streams into the exhaust pipe like a (high pressure) shock wave.

Due to the inertia, this gas will create a slight vacuum wave behind it, which helps to suck out more burned gas, but also fresh gas as soon as the intake opening is uncovered.

This way, the exhaust forms some kind of compressor, increasing the volumetric efficiency / power of the motor.

The shape of the exhaust is very critical with respect to timing: The length of the pipe between exhaust opening and first cone defines when the amplified vacuum wave reaches the cylinder - it should be there when the intake openings are exposed and fresh gas can be sucked out of them. And the distance to the second cone defines when the reflected shockwave reaches the cylinder. Again: This should happen when the intake is already covered, and the exhaust is not yet.

This means the exhaust pipe is designed for a specific RPM, where you get the maximum gain in power.

However, the angles of the cones allow to broaden the RPM range where the motor develops its power, at the cost of maximum power.

For example, here are power / torque curves for three exhaust systems on the same scooter:

First, it's notable that the motor starts to develop some power right above 5000RPM because there the exhaust starts to work.

Finally, the design depends on the needs of the vehicle, too. A motor cross bike usually has a transmission with several fixed gears and so runs over a wide RPM range. In contrast, scooters usually have a variomatic, which allows the motor to run on a certain, constant RPM.

The exhaust pipes are shaped to suck gasses out of the combustion chamber over a range of RPMs.

Imagine a 2 stroke engine without an exhaust*1. When the exhaust valve opens, burned gasses leave the cylinder. Leave the valve open for a long enough time and the cylinder will be at ambient air pressure.

Now run the engine at a fixed speed and add a straight pipe as exhaust. When the exhaust valve opens a wave of compressed gasses will flow into the pipe, progress to the end of the pipe, and expand into the surrounding atmosphere. At this time a reverse (low pressure) wave will enter the pipe and travel back to the cylinder. Time this right and you can suck some of the remaining burned gasses out of the cylinder.

Now a straight pipe only works for one small range of RPMs. But if you change the pipe to a V-shape it will work more gradually.

Sadly I will have to leave those two for others to answer. 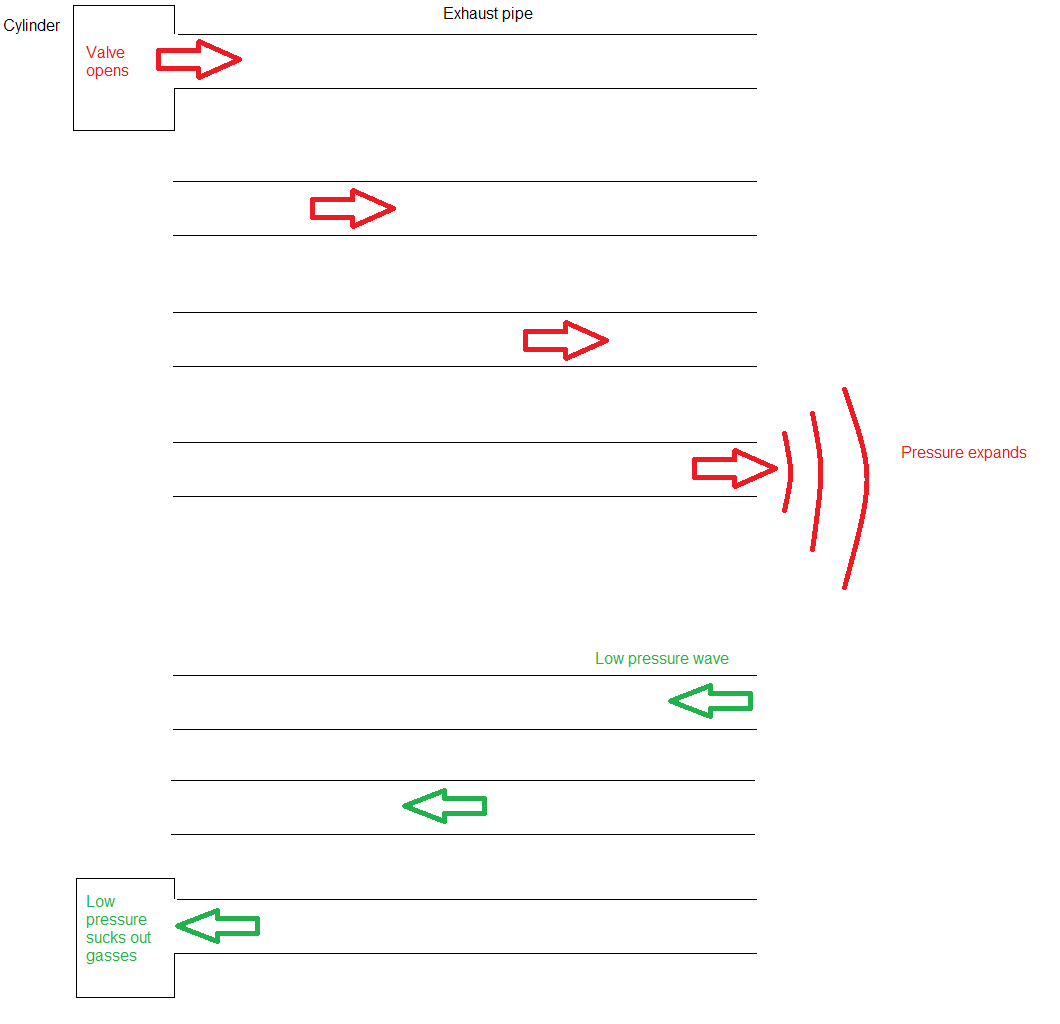 Additional information from – Perkins who has more detailed knowledge. Put into the answer since I understand that comments will eventually disappear from answers.

It's a little more complicated. Two-stroke engines have new fuel-air mixture coming into the cylinder at the same time as the exhaust is leaving. Sucking sufficient quantity of exhaust out of the cylinder is trivial. The wierdly-shaped exhaust pipes like the one pictured are actually tuned for a specific RPM range, and they first suck a larger quantity of fuel-air through the engine, and then the pressure wave bounces off the second narrow part and pushes the extra fuel-air back into the cylinder at a higher pressure, reducing fuel waste and increasing performance.

*1: Ignore the risk of dirt getting into the engine.

5
No compression on my two stroke
1
True/False - For small 2-stroke powertool engines (chainsaws etc), the muffler is inherently restricting power

3
Small two-stroke engine runs poor
4
Single Cylinder 2 stroke bike with twin exhaust, will it need two chambered exhausts?
6
Clamping two 2" exhaust pipes together
7
Exhaust Backpressure and Its Impact on LTFT Values
2
Two-stroke vs four-stroke design
1
This seemed a good spot for engine-stuff, so: What are some ways that *may* lead to greater power in a chainsaw?
1
Exhaust back-pressure Q on simple 2-stroke yard-equipment engines:
3
Replaced my 5 cylinder Volvo V70 2.5l turbo engine with a 6 cylinder S80 2.9l twin turbo engine and I'm having trouble with the exhaust
0
Two stroke engine with unreliable idle