Why do Harley Davidson engines suffer from such poor performance?

The modern Harley Davidson engine has very poor power output. Even when highly modified a 130HP engine can cost tens of thousands of US Dollars.

Here are specs on one of the modern engines.

This has always been the trend with Harley. I've heard all manner of reasoning. It's a cruiser, it's not trying to do that. On and on. Well, guess what. Every single Harley rider I know dumps tons of money into their machines to get an extra 10 or 25 HP. So that's hard to buy. The community of Harley riders globally spends hundreds of millions of dollars on aftermarket parts.

What am I looking for?

A little bit of honesty. I figure this is the place where I can get that.

Why are Harley Davidson engines such poor performers on their horsepower ratings?

They consistently lose to the Big 4 Japanese V-Twin cruisers in terms of performance as well almost everything else but the Royal Enfield.

What is it about the design of Harley Davidson engines that limits their performance?

Thank you for letting me bring my motorcycle vitriol here. You all are champs! 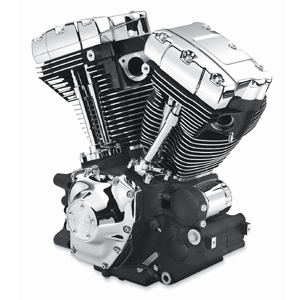 First of all, I don't really know much about motorcycles, so don't beat me...

For a good comparison, one needs torque/hp diagrams. However, they are not easily to find on the web for certain models. In most cases, you will find plots showing curves before/after tuning.

I tried a little and found these two bikes, which hopefully are comparable in this question. 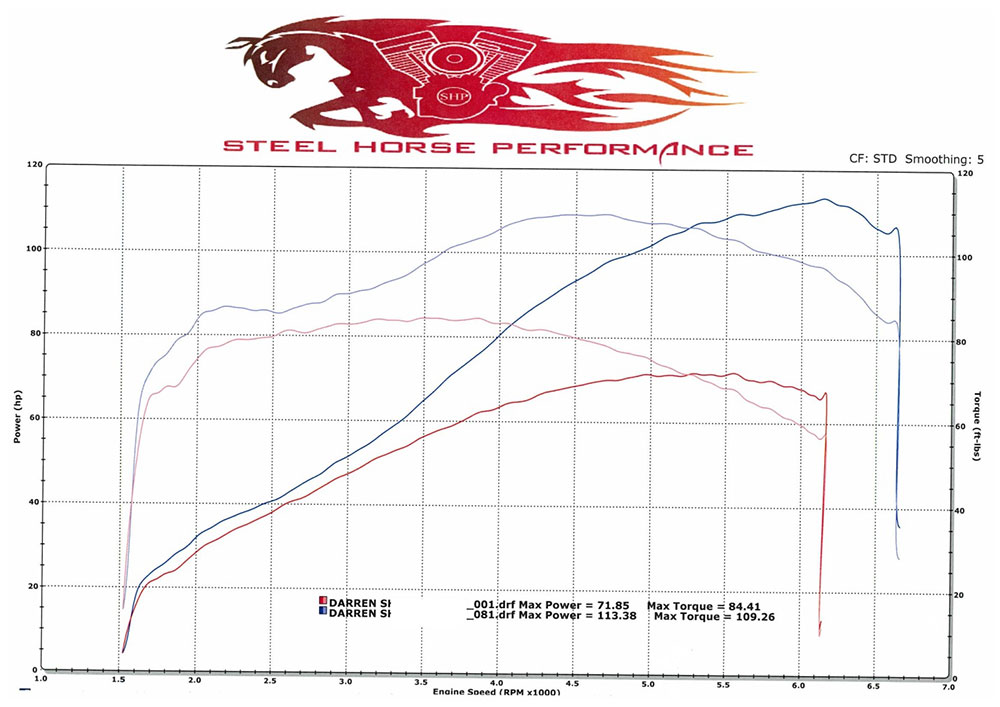 And I found something similar for the Yamaha Vmax 1700 with 1679cm³ (I hope, this is appropriate): 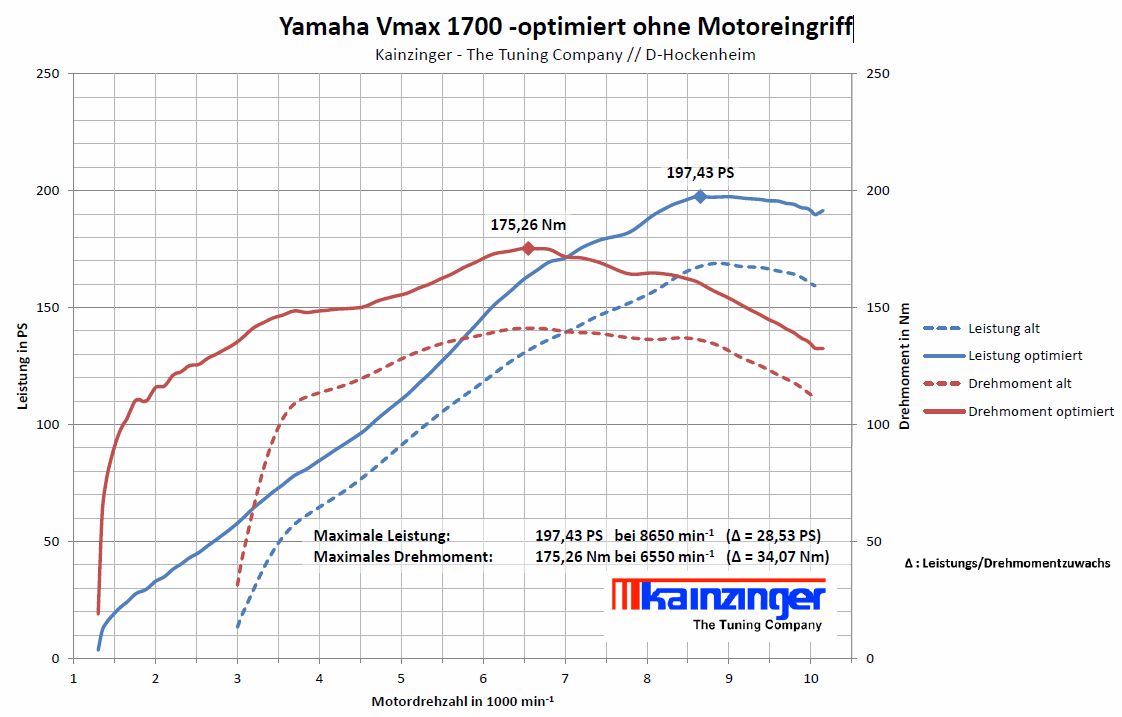 This bike is made for lots of torque and high speed. Now, let's compare the curves. I've extracted them and brought to the same unit (mainly torque, but there's also a small difference between imperial (hp) and metric (PS) power): 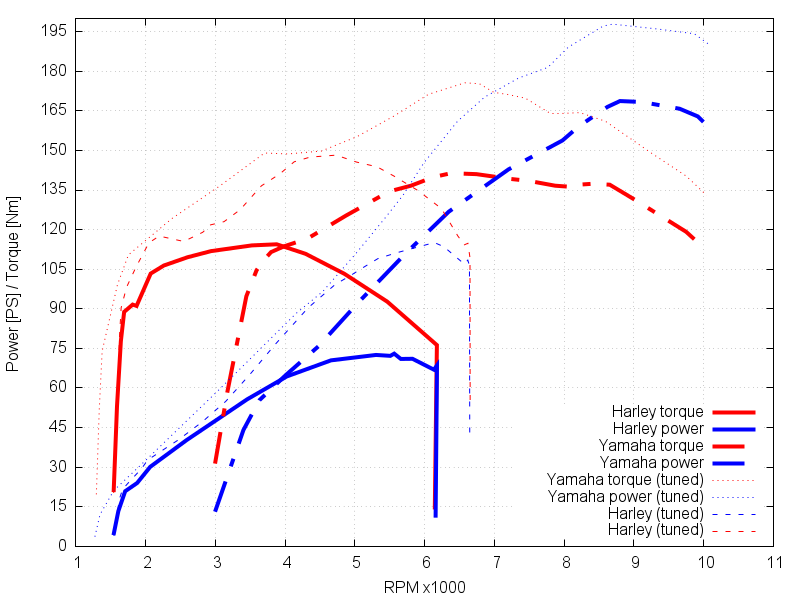 The Harley delivers nearly maximum torque at 2000RPM, and keeps going until 4000RPM, after which the torque decreases. That's also the RPM where it's finally outperformed by the Yamaha in each, torque and power.

(I've also added the curves of the tuned bikes and there, the Yamaha outperforms the Harley from the beginning.)

It's not clear how exact these curves are. For example, I also found a site stating about 125Nm torque for this Harley, while the curve shows 115 only.

But in general, Harleys are usually driven at low RPM, where they have more torque and more power than that 140PS Yamaha bike.

May be, the Yamaha is an extreme example, but keep in mind, the Harley compared here has just 1.5l displacement.

Royal Enfields are poor man's Harley they both have a thing in common , a relatively high displacement engine for less amount of horsepower.

It has a Big bore long stroke design , it gives out excellent low end Torque , I have driven this motorcycle and you get almost all of the awesome torque at around 1500 rpm.

The reason it has this design is because these engines were built for the army way back in the 50s to be driven off road especially in desert and muds where this low rpm max torque is desired so not to get the wheel stuck in mud or sand.

This design stuck with the bike and it has now become classic vintage design.

Choppers are of similar nature for example the Twin Cam engine spoken by the OP has the bore x stroke of 95.3mm x 101.6mm

In conclusion, Choppers have the particular big bore long stroke design to have max torque at low rpm which is ideal for a cruiser whereas a sports bike has to rev to higher rpm to reach its peak torque figures which is not very desirable in cruising.

Apart from all the technicality, I prefer the chopper engine to a high revving engine for cruising, the feel is very unique

"Why do Harley Davidson engines suffer from such poor performance?"

"The community of Harley riders globally spends hundreds of millions of dollars on aftermarket parts."

You have answered your own question. It is simple economics. Create the demand by building low-performance into the whole image. Now you've just added hundreds of millions of dollars to your bottom line by selling / endorsing aftermarket parts.

The Harley V-twin engine design dates from 1914. It was crude and otdated even then.

Pretty much every part of the engine design is a total cluster****. It is completely unbalanced due to the 110 degree cylinder angle (rather than the ideal 90 degree). It uses overhead valves which limit the rev range to 4500 rpm (power is a direct function of engine rpm) and promote inefficient combustion. It has a long stroke and small bore which reduces throttle response.

A modern V-twin liquid cooled sports bike engine is perfectly balanced and revs to over 9000 rpm. It uses DOHC valves and a high compression ratio. The stroke is short the bore is large to allow free revving. Power output is as much as 150 HP/litre.

Engine compression ratios (pdf) are the single biggest difference between modern car and motorbike engines. This is the major source of the greater power outputs from the much smaller engines in most motorbikes.

European cars tend to top out with a ratio around 10:1, though some of the new 1l ecoboost types are getting up to the 12:1 mark. A 2019 Honda CB650r has a ratio of 11.6:1 giving an equivalent 95hp output to the Harley. In your question you note that the CR for the Harley is 9:1 which is frankly pitiful for a motorbike, basically it's a 2 cylinder 1.8l car engine, not a bike engine, and hence you see car engine RPM ranges and power outputs for an engine of that size.

Not the answer you're looking for? Browse other questions tagged engine motorcycle engine-theory harley-davidson or ask your own question.