Does exhaust gas pressure impact the output of narrowband lambdas?

In the course of writing this answer I learnt that the current output of wideband lambda sensors is sensitive to exhaust gas pressure.

10.6 Pressure dependency of the sensor signal

A pressure change of the measured gas gives a deviation of the sensor output signal of:

There is also a nice graphical representation of the deviation which I can post up later.

I wonder if the same is true for narrowband sensors. They operate quite differently from widebands, but it is known that certain cars dislike certain brands/models of narrowband sensor, even though the waveform should not change.

There are currently two kinds of narrowband sensors used these days: titania sensors (NTK) and zirconia (Bosch). This answer only addresses the zirconia sensors which are the most common type. 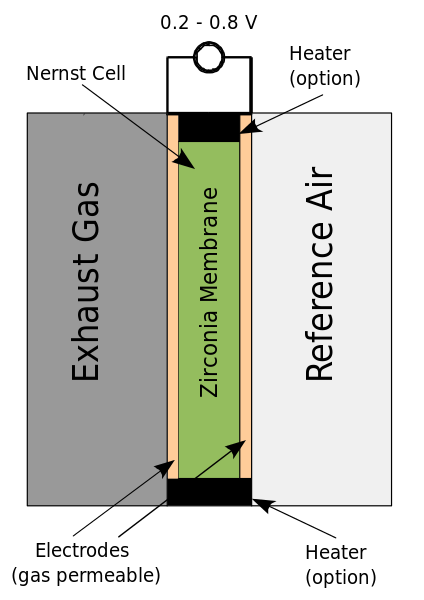 Referring to the diagram (which was created by Michael Handrich and shared under a Creative Commons license), the sensor is a galvanic cell that generates what's called the Nernst voltage which is proportional to the natural logarithm of the ratio of the two different oxygen concentrations. Specifically, this is the Nernst voltage equation:

Where k_B is the Boltzmann constant in J/K, T is temperature in K, e_0 is the charge of an electron in C. c1 and c1 are both ion concentrations.

Another important physical law is Dalton's law which says that the total pressure of a mixture of ideal gasses is equal to the sum of partial pressures.

This means that a higher total pressure on the exhaust gas side should mean a higher concentration of oxygen and therefore a higher voltage compared to the voltage that would be present if there were no pressure differential. That is exactly what your equation says (although it is somewhat curiously related to the current rather than the voltage in that equation).

I can't find an authoritative source which gives the exact coefficients for a narrowband zirconia sensor, but I'd expect it to be identical to the equation you gave with the only difference being the values for the constants.

Also, since we are talking about a narrow band sensor in this case, the effect would be only on the narrow linear range of the sensor -- "too lean" or "too rich" voltages would be unchanged. Only the points at which the curve changes from flatline to linear would shift slightly.

Not the answer you're looking for? Browse other questions tagged exhaust o2-sensor or ask your own question.

22
LTFT and STFT values are off and don't make sense

4
Why would one install widebands on vehicles that are setup for narrowbands?
7
Exhaust Backpressure and Its Impact on LTFT Values
21
What does pie cut exhaust mean?
11
Do naturally aspirated engines need back pressure in the exhaust pipes?
7
Locating the O2 sensors and the cat along the exhaust
0
Different pipe pressure on motorcycle exhaust
2
Fixing an exhaust leak at the O2 threads
3
Can the same O2 sensor provide narrowband and wideband output simultaneously?
1
What is exhaust gas recirculation?
0
Is my exhaust causing misfire or did misfire burn the exhaust?