I recently had to remove the fuel injectors and fuel rail to clean out the EGR ports on my Honda Accord. The EGR port was all clogged up with carbon build up. I replaced all the old o-rings, cushion rings and injector seals with new ones. One of the injector seals isn't sealing properly.

I saw a youtube video where someone used silicone spray. It looks part of the metal on the engine where this injector goes in isn't quite even at one part. What's the best way to get this thing to seal up? The vacuum leak from this is causing my idle to go way up (1.5 - 2k rpms) it gets worse after using the brakes.

Is there something out there that would work better?

I've thought of using heavier weight engine oil or putting a washer in front of the cushion so that there will be more pressure on the injector seal.

Here's a picture of a similar fuel injector. My model doesn't have insulators though. 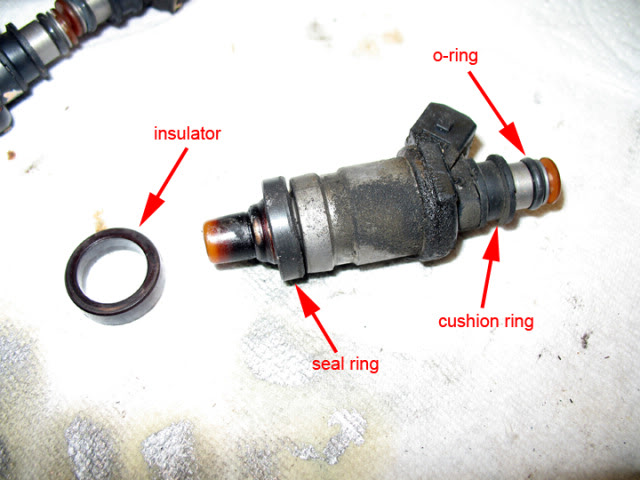 The injector seal is most likely torn. I typically see this when the seal is installed dry.

Get a new seal and reinstall it with some type of lube like Vaseline or silicone spray so the rubber doesn't stick and tear when being pushed into place.

Oil or silicone gasket maker applied after the fact isn't going to work - The o-ring should seal on its own as was designed by the manufacturer.

Not the answer you're looking for? Browse other questions tagged fuel-system seal vacuum or ask your own question.

6
What causes too much fuel for my Briggs and Stratton engine?
4
Possible Fuel pump damage
3
Conequences and remedies of a cam seal leak
5
Do you need to replace injector seals if they are removed from the intake?
5
Do I have a fuel pressure or injector problem, or am I just chasing ghosts?
4
Fuel Rail Pressure dropping & engine shutting down - Whats the cause?
2
Low fuel pressure in Volvo S40 1999