This morning my power steering stopped working and my heater and when I opened the hood there was coolant everywhere, looked like it came out of the radiator cap. The serpentine belt was off the lowest pulley and when I tried to put it back on I realized that pulley wasn't in line with the others, was not possible to put belt on. What would cause the pulley to move so far out of alignment and how can I fix it. Is this what's causing the other problems? It was below zero degrees last night and no garage.

I'm not sure which pulley you're talking about, but would assume it's one of two: idler or tensioner. This is the pulley system of the 97 Lumina (should be the same for the 3.1 or 3.4 engine):

Since this setup doesn't have an idler pulley, it would most likely be the tensioner pulley which is not aligning (if not the tensioner, please tell me which one and I'll adjust this answer).

You'll need to replace this pulley in order to get a new belt on it. Depending on what is out of whack, you could just replace the pulley itself, or the entire spring assembly. Once it is replaced, getting the belt on shouldn't be an issue. It would seem more than likely this is the cause of why you both lost your power steering and why your radiator cap exploded with coolant.

As long as you didn't overheat your car, there shouldn't be any complications. (NOTE: Just because radiator fluid escaped, doesn't mean it was overheated to the extent your engine suffered damage.) This really depends on how long the engine was running prior to you checking under the hood. As you can see from the diagram, the alternator, water pump, steering pump, and A/C compressor are all connected to this belt ... when it came off, you lost everything.

To change out the tensioner, there should be (it appears) one bolt in the center (near the arrow in the picture) to pull the entire thing out. The tensioner with pulley should look like this: 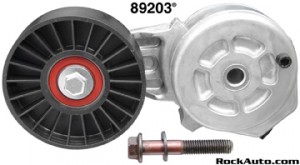 As you can probably see, there is a pin on the spring side (right side of image) which holds the tensioner in place, along with the single bolt. You can possibly get a pulley by itself, but replacing the entire thing is a good preventative measure.

If it truly is the "bottom pulley", you have much more serious issues at hand. That's the crank pulley and would take a lot more intervention to fix.

Check all the pulleys and accessories to see if any are loose and can be wiggled back and forth. I got a '93 Chev truck that gave me some belt trouble. There is a flat mounting plate on the front of the engine that the power steering pump attached to. It was cracked and had some bolts out. Same could happen with any of the driven accessories if they have any movement. Once the serpentine belt flies off, engine overheats very quickly and it can be difficult to tell why the belt came off. So in your case, could be loose alternator, power steering pump, water pump, air cond. or tensioner. Check 'em all.

Not the answer you're looking for? Browse other questions tagged chevrolet radiator steering pulley lumina or ask your own question.