GM developed magnetic dampers for the Corvette several years back. What is magnetic active suspension and how does it work?

I understand there is a magnetic fluid in the shocks but how, deep down, does this work other than running electricity through it?

I think they licensed this to Ferrari too but that's a forum statement and I don't have a citation.

As others mentioned the dampers are controlled by an electromagnetic coil (two coils in newer designs). As current is applied the fluid becomes more viscous leading to more damping.

This technology is still currently in use in Corvettes as an option, as well as in other makes and models. The GM system is relatively simple only takings a few inputs (Four damper position sensors, vehicle speed, engine torque, brake system pressure and steering wheel angle) in regards to how much damping is needed.

MagneRide consists of four monotube dampers, a sensor set and an on-board Electronic Control Unit (ECU). The magneto-rheological (MR) fluid used in the dampers is a suspension of magnetically soft (easily, but temporarily magnetised) iron particles in a synthetic hydrocarbon base. The damper piston contains an electromagnetic coil that can generate a variable magnetic flux across the fluid passages. When the coil current is off, the MR fluid is not magnetized, the iron particles are randomly dispersed within the fluid, and the fluid behaves like conventional hydraulic oil. When the coil is energized, the magnetic field causes the particles to align into fibrous structures in the direction of the magnetic flux. The strength of the bond between the particles in the structures is proportional to the strength of the magnetic field, so changing the current provides real-time variable damping with a very large range of force variation. The result is a system that outperforms conventional variable damping systems, but without the complex electro-mechanical valves used in those systems. Compared to other, valve-based technologies, MagneRide achieves a much broader damping force range and responds much more rapidly without generating noise. 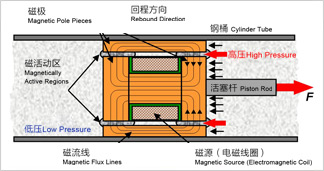 A magnetorheological fluid (MR fluid) is a type of smart fluid in a carrier fluid, usually a type of oil. When subjected to a magnetic field, the fluid greatly increases its apparent viscosity, to the point of becoming a viscoelastic solid. Importantly, the yield stress of the fluid when in its active ("on") state can be controlled very accurately by varying the magnetic field intensity...

The magnetic particles, which are typically micrometer or nanometer scale spheres or ellipsoids, are suspended within the carrier oil and distributed randomly in suspension under normal circumstances, as below.

When a magnetic field is applied, however, the microscopic particles (usually in the 0.1–10 µm range) align themselves along the lines of magnetic flux, see below.

From the LORD page, a supplier for BWI.
http://www.lord.com/products-and-solutions/active-vibration-control/industrial-suspension-systems/magneto-rheological-(mr)-fluid

LORD magneto-rheological (MR) fluids can respond instantly to varying levels of a magnetic field precisely and proportionally for controllable energy-dissipating applications, such as brakes, shocks and dampers. When exposed to a magnetic field, the rheology of LORD MR fluids reversibly and instantaneously changes from a free-flowing liquid to a semi-solid with controllable yield strength. Response time for all LORD MR fluids is <5 ms; however, exact time is dependent on device design. All of our fluids are gray in color and redisperse easily with proper agitation. The iron particles contained in the fluid are between 1 to 20 microns.

Because this is controlled with an electric current, it can be changed hundreds of times per second.

I believe the way it works is that the fluid within the damper is filled with what basically amounts to iron filings. During normal operation, these float about, suspended within the liquid and not doing much.

A highpowered electro-magnet is embedded within the design of the damper body / shroud and when current is applied, the magnetic force changes the behaviour of there magnetic particles which are normally freely moving within the fluid. This effectively makes the fluid change it's viscosity, this effectively changing the damping rate and "firmness" of the damper units.

Not the answer you're looking for? Browse other questions tagged chevrolet suspension gm corvette or ask your own question.