What are Performance Camshafts?

I read the following question recently:

What is it about performance cams that make engines produce more power when they are installed?

I know there are a few components for cars that have "cam" in the name, like "camshaft", "cam belt", "cam sensor", "reversing camera" etc.

What exactly do they mean by "performance cams" and how do they increase power output from the engine?

refers to the shaft which houses a series of cams that actuate the opening/closing of the intake and exhaust valves on a four-stroke engine.

is just a camshaft whose lobe profile is tailored to utilize more of an engine's potential.

Here is a visual comparison²:

The performance improvement can come from two types of change:

Here is a neat diagram summarizing lots of camshaft-related terminology³: 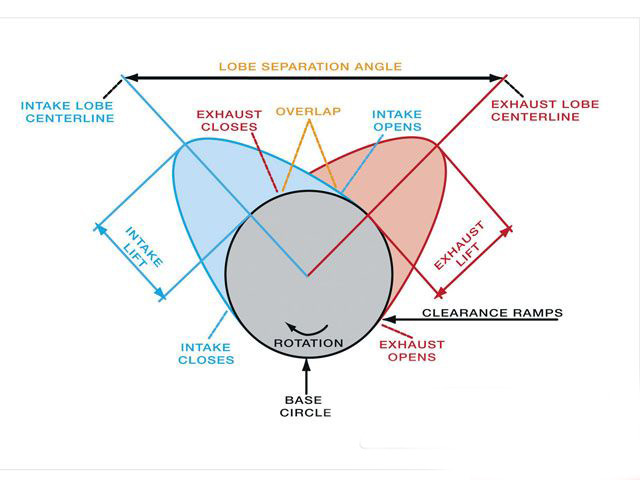 The key thing to remember here is that engine power isn't totally reliant on a single component in most situations. It's usually all about how the different component play in harmony with one another.

Performance cams have various cam lobe configurations where the valve lift and duration are changed from OEM to provide better efficiency for the combustion process.

I would like to make a distinction between efficiency for the combustion process and efficiency of fuel consumption.

With more duration and valve overlap you can get better volumetric efficiency.

Not the answer you're looking for? Browse other questions tagged engine performance engine-theory camshaft or ask your own question.

12
How does intake manifold runner length effect the power curve of a car?
9
What is Lobe Separation Angle (LSA)?

13
How much power (HP) do the components on the engine belt generally use?
4
Audi A4 2007 2.0T boosts but poor performance, fuel economy
2
Peugeot 207 "Cam Cover" Letting in Air
35
Changing Firing Order in a 4 Cylinder Car
10
Scatter Camshafts - What are they and why do I want one?
20
Why do Harley Davidson engines suffer from such poor performance?
5
What are the characteristics and uses for desmodromic valves?
0
Why are high performance electric cars promoted as requiring no gearbox?
1
There's no replacement for displacement