I have noticed that all the tires on my VW Passat B5 have "44 PSI" written on them except the spare that has "51 PSI". This seems incredibly high to me so when I filled them up recently at the petrol station I put them all on about 35-38 PSI for fear of over inflating them (I'm not sure how accurate the public machine is). Most people that I have spoken to seem to say:

However, I would like a more definitive answer than that or at least justification as to why. Also, I have found that there is also a lot of evidence, here and elsewhere on the internet to show that you lose some tire pressure with a decrease in temperature (although that might be negligible in the UK most of the time).

I can only assume that the tire pressure on my tires is a maximum value, hence my question.

How can I find the correct tire pressure (presumably specific to my tires) for my car tires?

On every car sold (that I'm aware of) there is a sticker pasted, usually in the door jam of the driver's side, which states exactly what the car manufacturer suggests your tire pressure should be at. It will give a front/back pressure. This is what you should use and not what the pressure on the side of the tire says. The figure on the tire is the maximum which the tire should be filled to, not what your car is expecting. 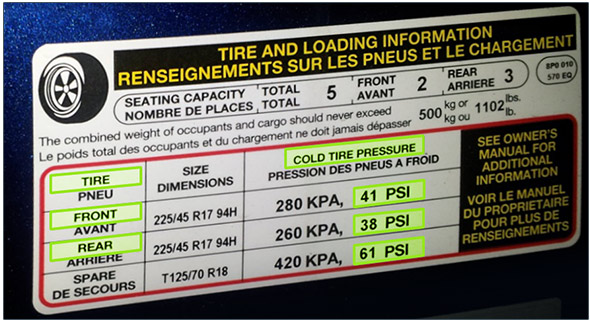 Something else to be watch out for, if you filled the tire to 44 PSI while the weather is cold and the tire is cold from not being driven, as soon as it warms up, the tire warms up, and so does the air in it. For a temperature change of roughly 10 deg C the pressure will increase about 3 PSI. Which if you have filled up the tire to the max, already puts you over. Now fast forward to summer and the air temperature is 40 or 45 deg C higher plus another 10 deg C for driving on the highway in the heat, and your up 55 deg C, which is about 10 PSI difference. If you started at the max, now you're way over. Do I think a 3 PSI over the max pressure is going to cause instant tire popping, no. But I would not want to hit a curb or a deep pothole while the pressure is that high.

I'm getting the figures for temperature related pressure increase from here: Cold temperatures and tire pressure light That post explains the physics of it really well, with graphs to demonstrate just how big the effect is.

Bottom line, @Paulster2 is correct, use the pressure from your door sticker, not the tire sidewall.

As @Random832 mentioned in the comments, the information for my 2004 VW Passat B5 was not in the door jam of the drivers' side, but rather it was actually on the inside of my fuel filler lid. Here is what it looked like: 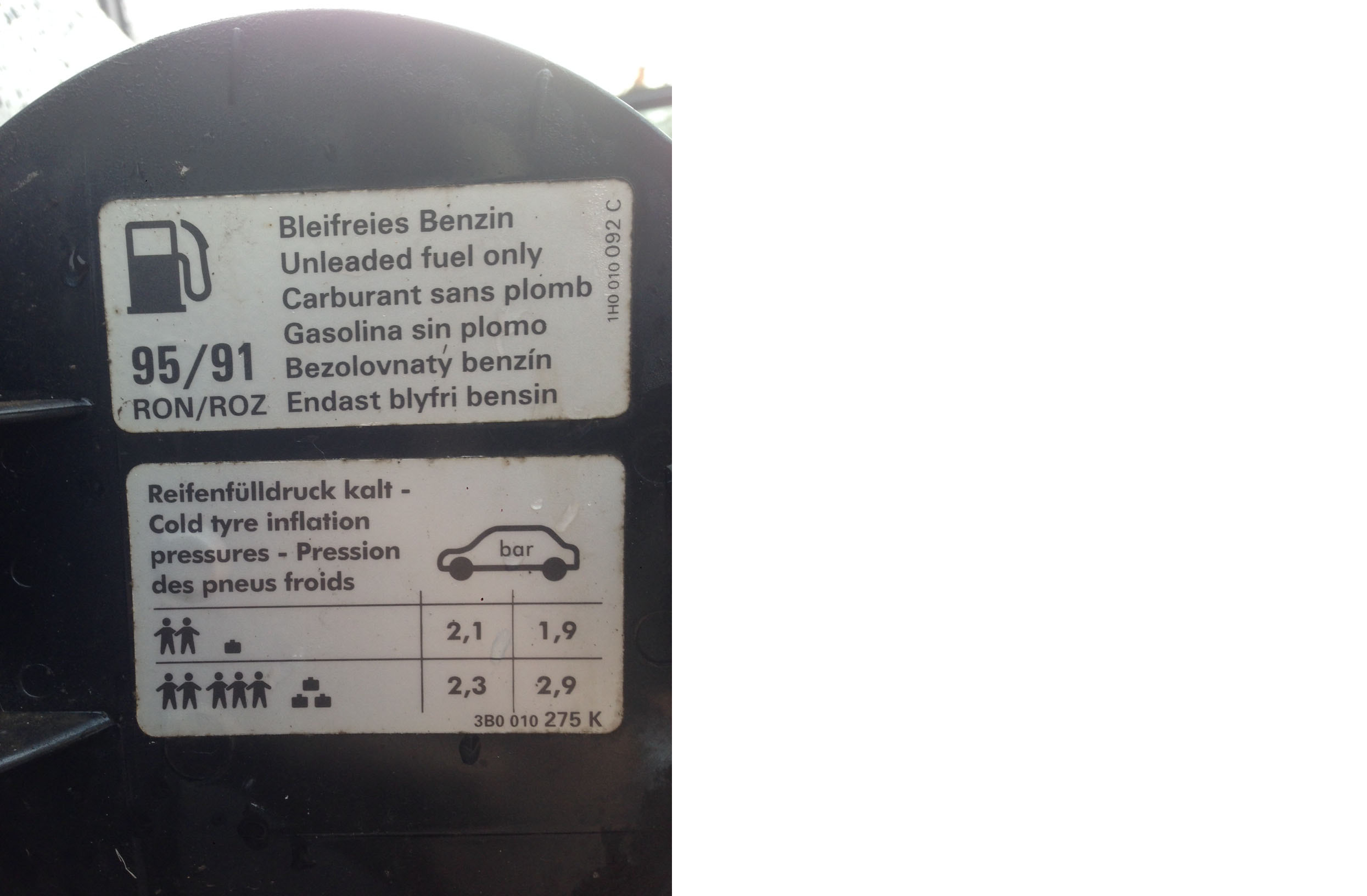 As you can see, the pressure here varies for the approximate amount of weight that the car is carrying, but also the pressure is only in bar. Given that 1 Bar = 14.5038 PSI (Pounds-Force per Square Inch) approximately, here are the manufacturer recommended tire pressures for my 2004 VW Passat B5:

All values in the table are recorded in PSI and rounded to the nearest integer.

As @Paulster2 mentioned, the PSI markings on the sidewalls were maximum values and should never be filled to this pressure for normal driving usage. The design of the car was not optimised for these higher tire pressures. It could also be dangerous if your tires are at the maximum and you drive over a large pothole of something similar.

As the air temperature increases, the tiny air particles gain kinetic (movement) energy. They move faster at higher temperatures, which results in more successful particle collisions as long as volume remains constant (which it would be inside an automotive car tire). The energised air particles can not disperse at they are trapped (for the most part) inside the car tire and this causes an increase in pressure. In other words pressure is directly proportional to temperature (P α T).

As pressure increases by 10 degrees Celsius, the pressure will increase approximately 2-3 PSI. See this post (the approved answer) for a really nice graph and more details on the subject of car tire temperatures and the effect that has on tire pressures.

Not the answer you're looking for? Browse other questions tagged tires pressure passat or ask your own question.

2
Finding Cause of Slow Tire Leak 2001 Camry
4
What is the best temperature range to check/inflate tires?
5
Which tire pressure is right for my 2008 Toyota Yaris's front tires?
11
Radial tires: Do they bulge at too high pressure?
6
Why does a tire have the same air pressure when mounted on the car and when not?
7
Should I over- or under-inflate my tires when towing?
1
Tire pressure and new tires
1
Car tires sitting in water will it cause PSI problem?
0
Can I run higher psi tires than the car manufacturer recommends? If so can I reset the tpms?