Why won't my engine rotate?

After doing some maintenance on a 2000 Porsche 911 engine (3.4l normally aspirated), I find that I can manually rotate it with a wrench on the flywheel, to a certain point but no farther and I can't figure out why it won't rotate.

I removed the engine from the car and replaced the rear main seal and the intermediate shaft bearing, which may have been seeping some oil and is a notorious weak spot for these engines. The intermediate shaft bearing replacement was done using a procedure recommended on Pelican Parts. (The linked procedure is for a Boxster rather than a 911, but the procedure is essentially the same.) The chain sprocket behind the bearing is held in place temporarily by set screws to prevent it from rotating and messing up timing. Then the bearing is replaced and the set screws removed. I did all of that and then decided to recheck the timing to make sure everything was still OK. It wasn't.

With all 6 spark plugs removed, I was able to rotate the engine through about 150 degrees or so, and then it won't turn any farther. I thought that perhaps I must have made some error and that somehow the timing was slipped (but note that I don't know that this is the case or not) so I used a borescope to look inside each cylinder. However, while some valves are open, there is still clearance between every piston top and every valve bottom. 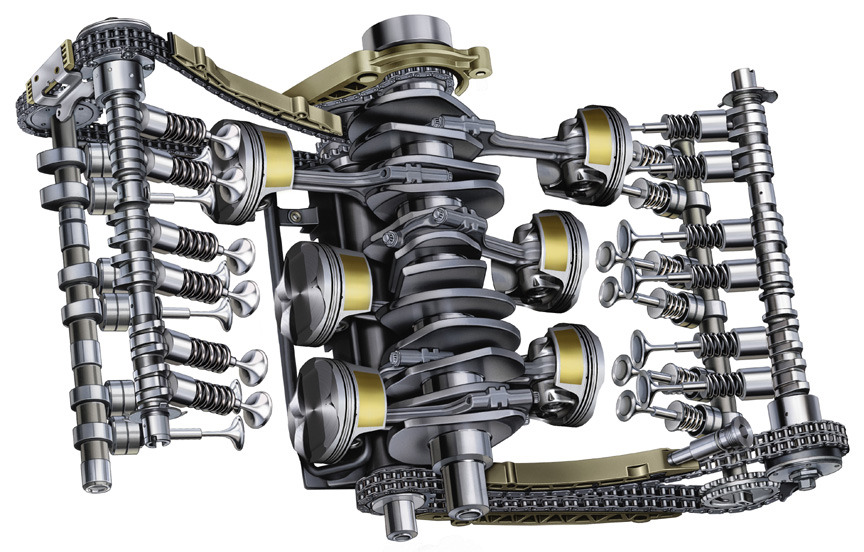 So my question is, why won't my engine turn?

Here are some additional notes that may help better convey essential details I inadvertently left out of the original description.

You need to confirm that timing is OK

This forum thread looks to be talking about the same engine as what you have (3.4 L, 5 chains).

According to the post, this is what you'll have to do:

I'm hoping that you can confirm that timing is out on the one side you can check. If you can't check either side then I'm not sure how else you could confirm if timing is to blame.

Based on the forum threads I've just reviewed though, I wouldn't be surprised if your timing is out.

The answer is one of:

It's been a while, but I finally took the heads off and many other things. The problem was, essentially, a "kink" in the chain connecting the crankshaft and the intermediate shaft (layshaft). I found that removing the tensioner for that chain, working the chain back and forth a bit, and then replacing the tensioner allowed me to rotate the engine. I'm still trying to understand exactly why that happened, and most importantly, how to prevent it from happening again, but at least the thing turns again.

Now all I have to do is figure out whether I should go ahead and rebuild it since I'm this far. Some performance pistons might be nice... :)

I have a 2002 Porsche 996 sometime last month I had The beginning failure of my intermediate shaft bearing The engine still running fine but you could tell he timing was off And of course heard the noise. when I try to rotate the engine , the metal filings inside the engine melted one of a chain tensioners (left side) producing a big ball of black plastic on the chain that got squished between the teeth. although the timing was Knocked off a little bit I was only able to rotate engine to a certain point and it was because of the ball of plastic Contacting the sprocket. doesn't look too bad for me but I do have a serious cleanup ahead of me and a few parts. Guess it's better than a complete catastrophic.If you have a flexible borescope try Removing the oil pump located on the camshaft left side Sliding inside you might see more stuff toward the intermediate shaft.Good luck with yours.

Not the answer you're looking for? Browse other questions tagged porsche crankshaft or ask your own question.

6
Quick paint job now, or wait until I can do it right?
10
Porsche 918 - benefits of top mounted exhaust
17
What mechanical revolution is measured in "RPM"?
9
Why won't my crankshaft turn a full rotation?
5
Can I run the engine for a short amount of time with a loose crankshaft pulley bolt?
4
Oil Treatment made Nissan Altima harder to use steering wheel
0
Why Tachometer shows idle RPM range instantly when closing the throttle and clutching
2
Timing belt issue
0
How can a puncture destroy the differential?