Why is a motorcycle's neutral between first and second gears?

The gear pattern is selected by clicking a lever with your left foot and is typically laid out as follows:

What is the technical reason engineers decided motorcycle gear patterns should reflect the above?

More precisely, why is NEUTRAL placed between first and second gear?

Two of the useful features of this setup (I have no evidence to prove they were the design reasons) are:

I have also ridden a bike where the gears were the other way round, with 1st at the top, then neutral, then 2nd, 3rd etc - kicking down to change up a gear...less natural...very odd when accelerating hard

The technical reason that manufacturers have chosen to use a sequential shift pattern with their gearbox configurations is that a standard shift plate that allows the selection of any gear desired is too bulky to fit into modern motorcycles.

The REAL REASON this configuration is used is that it's defined in the US Code of Federal regulations under Title 49.

As stated in other responses, neutral is in the position between 1st and 2nd gear as a form of logic and safety. In a sequential transmission the sensibility of placing neutral between 3rd and 4th gears creates user difficulty in getting to desired gears after stopping. The only logical place to have neutral exist is between 1st and 2nd gear due to safety and usability concerns.

Motorcycle shift patterns are purely the result of the technical layout and logic of the shift linkage within the transmission and the usage of a sequential transmission. Most modern motorcycles use a shift drum as opposed to legacy motorcycles mainly relying upon a shift plate. 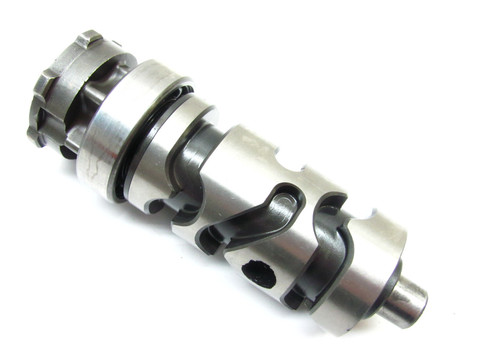 The shift drum has grooves around the outside of the drum that the ends of shift forks ride within. As the drum turns the grooves will shift for a particular shift fork sliding gears along the primary shaft or secondary shaft back and forth and placing them into locking positions to maintain a particular gear.

The only logical methodology would be to have the gears operate sequentially in order for them to placed into position in order of use.

The Code of Federal Regulations in the United States defines that the left will be used for shifting and that if there are more than two gears on the motorcycle the pushing the shifter down will take you to a lower gear:

The CFR does not define where nuetral shall be.

The CFR defines the order of the gears but obviously not the mechanism. Engineering and logic have continued to define the mechanism since the 60's when it was first introduced.

The shift drum is really the key to defining the order of gears and it so happens to match the requirements, in the US at least, that the government has enacted for safety. The gears shall be in order of highest to lowest.

Motorcycle technology has been an exercise of reduction over the past 100 plus years. Simplification, weight reduction and reliability have driven the changes primarily. Initially, shift plates were used and acted very similarly to a cars H pattern we see today. The invention, use and popularization of the shift drum have driven weight, simplicity and reliability to the next level.

As the drum rotates from the use of a paw drive (frequently) the outer diameter of the drums grooves change position, moving the shift forks and sliding transmission gears called sliders back and forth along the primary or secondary shaft to lock into place with a partner gear with the use of dogs and slots either protruding from or cut into a partner gear. This mechanism locks the particular gear into place along the transmission shafts thus engaging the gear. The key is the shift drum and it's rotation with the cut grooves. Prior to this mechanism a cam plate was frequently used below the two shafts that would move the shift forks. The cam plate design proved unreliable but did fulfill the initial duty of changing a sequential transmissions gears in the proper order.

Notice the grooves where the shift forks are aligned to

This is an excellent example of a v-twin engine with vertical cases split. As you can see, it illustrates the relation of both transmission shafts with shift forks and the grooved shift drum. 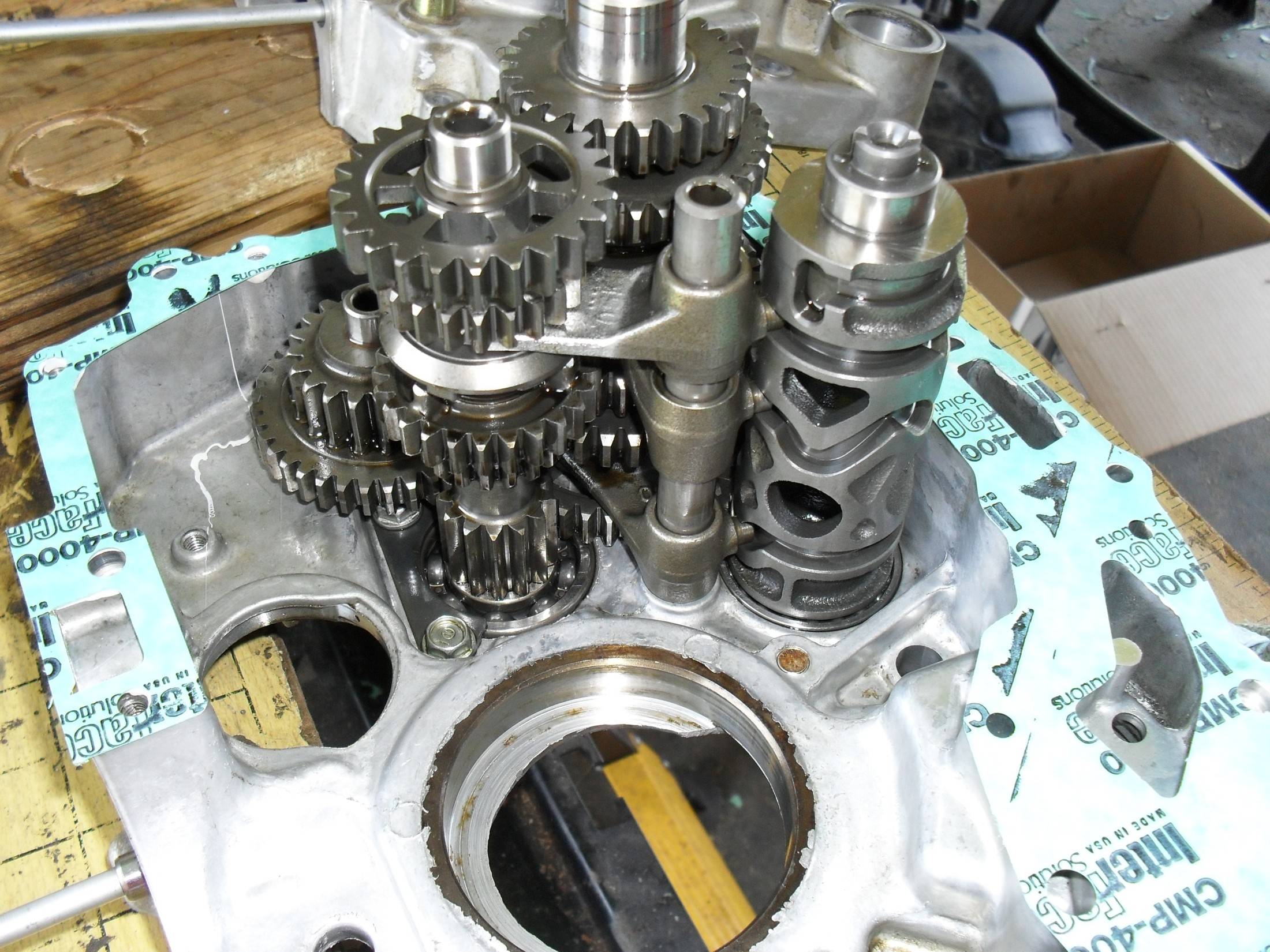 It’s worth noting that neutral is usually “half way” between 1st and 2nd, so that a shift from 1st to 2nd feels natural — the same “distance” as any other upshift. This can have the side-effect of making neutral hard to select on some bikes.

The primary reason for this is that it is far more common to desire 1st gear than neutral. If you stop at the lights, you can declutch and stamp all the way down on the gear selector, and be sure you’re in 1st, ready to pull away when the light goes green. Accidentally selecting neutral in this situation would be an inconvenience at best, and at worst could lead to falling over when you try to pull away and find out you’re in neutral!

Coming from a country where almost 80% of the personal transport are motorcycles I agree with Rory's answer,

When you are driving fast , you will spend a lot less time in Neutral and when you stop you dont want to end up without power at the wheels so it makes sense to have the lowermost plonk a Gear.

After driving a 1N2345 bike setup for like 5 years , one day I had to drive a N1234 bike, most of the time I stopped the bike I was in neutral twisting the throttle only to make noise, riding becomes difficult and frustrating.

Thus the idea of a N1234 looks idiotic but the reason as to why most commuter segment bikes still have them is because of comfort while waiting for signal or being stationary, if you have to live with stop and go traffic everyday then having Neutral all the way down will actually be helpful as it will easily allow you to reach it no matter what(its sort of a gear in a N1234 setup) so there is no chance of you missing it.

Imagine stopping ever 15 yards and having to pull the clutch and search for the half neutral on a 1N2345 setup , by the time you figure it out the traffic starts to move and you are back where you started.I personally prefer holding onto the clutch instead of searching for the neutral as its a pain.

Early motorcycles did not have gear indicator and gearbox mechanic was not precise. These days pulling (pushing) a gear pad never guarantied whether you made change for one or more gear levels. In traffic, when starting from street lights, you want to be sure that you will start (from first gear) and not stall! Otherwise this could be security risk and somebody (a car) from behind could hit you if you start and stall (rapidly stop) trying to start from second (or higher gear) you selected by mistake!

The 1N2345 system separates the first gear from others (one push or pull in oposite direction)! This way you can always be sure that you did not overstepped wanted first gear and that you will be able to start without a stall!

Another advantage of this configuration is that you can continue to drive changing from neutral to second gear with just one pull (push). For example in situaton when you're intending to stop on red street light, slowing down you change into neutral position preparing to stop and see that in this moment green light turnes on. While still in motion, you do not have to go into first gear (and stall) and with just one pull you can turn from neutral into second gear and continue to ride your motorcycle (without being hit behind).

There isn't a technical reason. The pattern can be, and sometimes is, quite different than what you state. It is the combination of history and evolving ergonomic considerations in play here. Really old bikes had an all-up pattern so neutral was at the bottom or top of the pattern.

There was a government rule established in the US 40 years ago standardizing motorcycle controls for regulated motorcycles, so there are political reasons as well.

But it isn't for technical reasons.

Between first and second is the most logical place to put neutral given that it can easily placed anywhere. Don't forget, you aren't spending time in the neutral position in ordinary driving, so you certainly don't want to find yourself there inadvertently!

Not the answer you're looking for? Browse other questions tagged motorcycle transmission engine-theory sequential-transmission or ask your own question.

6
Why are gears designed in this pattern in motorcycles?
5
Shifting on a motorbike by preloading

4
Unable to move in first and second gear in VW Polo
3
How to isolate whining noise in 4wd power train?
13
What differences are there between straight cut and helical cut gears?
4
Why don't valvetrains use an idler gear between the cam gears
2
Why does my motorcycle's performance decrease?
1
not fully shift gear- position between second and neutral