What can I do with an Inline Spark Tester?

The simple flashing one which goes in between the wire and plug with the plug in place: 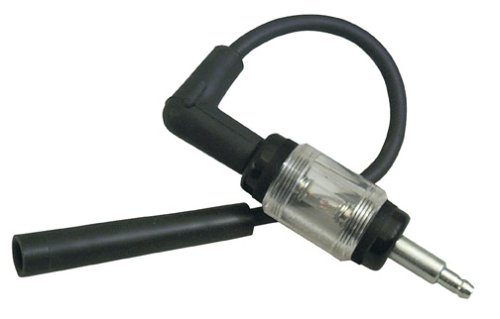 A slightly more complicated type with the addition of a ground connection: 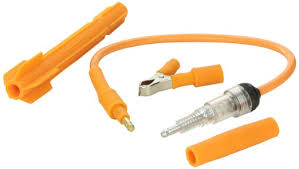 And a type that has an adjustable gap and is grounded:

The middle one makes the following claim:

pinpoints if there is a spark plug, plug wire, mechanical, fuel injection or electrical problem. Shows a duplicate view of the ignition spark so technician can visually check condition of ignition system at each cylinder.

What types of problems can be detected with each type, and how do they function?

The first device just tests if current is flowing out of the cable into the spark plug. So if you can see it flashing, coil and cable are fine, but it's still possible there's failure #1.

The third is used without plug and allows to measure the strength of the HV pulse. It should be strong enough to generate a spark up to a certain gap width. For example, 30kV could form a spark over a 1cm gap in dry air. So this device allows to test #5.

Note that none of these tests #1, but a plug can be easily replaced for testing. If the resistance between terminal an thread/frame measured by a multimeter and it's not infinite, then the spark plug is probably clogged with carbon.

#5 is a bit special. A ignition coil has thousands of turns to generate the high voltage. It is possible that the insulation between some of the turns fails, and so a short circuit is formed between those turns. As result, the voltage of the pulse is lower than normal. This "weaker" pulse may still be able to ignite the mixture in your cylinder most of the times, but under some conditions, it will not, or not so reliably. Typically, the motor will stall or run roughly at low RPMs / when idling, and starting the motor is not easy. This means, while the plug still generates sparks and the first two devices will flash, the spark will be too weak to ignite the fuel. And that's a bit difficult to measure.

The third device allows to measure the pulse strength by testing what's the maximum width of a gap which will still generate sparks. However, if this pipe is filled with ambient air, the width heavily depends on humidity. So, using this is more an estimation than a real measurement. Yet, you may compare all the coils of the vehicle to test if one is weak.

You can waste hours of your time with Inline testers they do not accurately check the spark plug. The plug acts as an earth, as long as it has any weak spark or carbon the light will come on. A new cde pty ltd spark tester kit ( see you tube demo) is the only accurate way to check your spark plug. It just takes 2 minute.

Not the answer you're looking for? Browse other questions tagged ignition sparkplugs tools diagnostics or ask your own question.

4
MX5 lost power after spark plug change
7
What do you do with dielectric grease on spark plugs?
7
2004 Saturn ION with Ecotec 2.2: Engine misfire with code P0300, ICM problem?
18
What is a leak down tester and what can I do with it?
14
What Color Should the Spark Be When Using a Spark Tester?
10
How to diagnose the cause of no power reaching the spark plugs when power reaches everything else, after checking fuses?
5
What are the benefits of direct ignition (coil on plug) system?
0
Craftsman Leaf Blower wont start, ignition coil failure?
2
Failed coil electronics plug for one cylinder