What is DEF and how is it used?

I keep hearing about DEF ... what is it and why is it used in conjunction with diesel engines? I know it is a more recent thing (last decade), but don't know much about it.

DEF Diesel Exhaust Fluid is a Urea based fluid that is added to the exhaust ahead of a thermal reactor. Its purpose is to reduce the amount of NOx (nitrogen oxides) in the exhaust. It works as a fuel. NOx is reduced only in rich mixtures. Diesels run lean at all times and therefore have little extra fuel in the exhaust. While the lean combustion mixtures in diesels produce much NOx.

So in the schematic of a typical newer style diesel exhaust. Exhaust gas exits the oxidation catalyst A then Urea is mixed in at B. The exhaust and urea enter the SCR unit were several chemical reactions occur. First the urea is converted to ammonia this then reacts with the NOx to reduce it to Nitrogen and water. The particulate trap E catches and then periodically burns the fine carbon particulate that is also a regulated pollutant. A clever but rather expensive solution. The process is not new, it has been used in stationary diesel engines for some time. 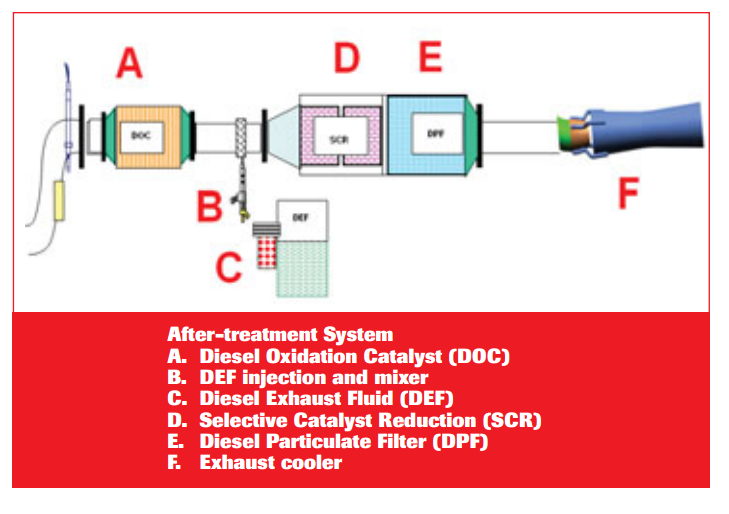 NOx is an EPA regulated pollutant, in the atmosphere it combines with hydrocarbons in the presence of sunlight and turns into ozone. Ozone is a pollutant known to damage lung tissue. In 2010 USEPA limits on tailpipe NOx output changed to much lower allowable amounts. New methods of control were needed. The above outlined method became the most common system.

Not the answer you're looking for? Browse other questions tagged diesel engine-theory or ask your own question.

15
Diesel vs Petrol motorcars. Pro's and cons?
7
Are there any modern diesel engines that require electricity to continue running?
6
Can diesel engine be harmed as easily as gasoline engine by over-revving?
11
Why don't all diesel engines have throttle plates?
7
Two-Stroke vs. Four-Stroke Diesel Engines - What is most commonly used in heavy vehicles?
11
How are diesel engines better for the environment than gasoline?
5
Diesel engine timing?
4
How does water/meth injection on a diesel work
2
What is the purpose of DEF in VW?