Why no exhaust gas turbine generator in hybrid vehicles?

I found something interesting on Wikipedia today: a hybrid turbocharger. This is a device that charges a battery with an exhaust gas turbine, and at the same time operates an air compressor using the battery to pack more air into the engine. As a benefit, the turbo lag is eliminated because the direct link between the turbine and the compressor is eliminated.

It seems to me that this device has two independent parts that can be used without each other: the exhaust gas turbine generator and the compressor. You probably need a heftier battery, too, than what is used in conventional vehicles. Thus, in my opinion this device is most suitable to hybrid vehicles.

However, hybrid vehicles have already direct electric boost, so I'm not certain that a compressor could be very beneficial. The turbine generator part, however, seems useful. There is lot of energy in exhaust gases and a turbine generator could recover some of it. In a hybrid vehicle there is good use for the recovered electricity.

So, why no production hybrid vehicles use an exhaust gas turbine generator? Is the technology too immature? Too unreliable for the goal that hybrid vehicles should have greater reliability than conventional vehicles? Or are the potential gains of such exhaust energy recovery so minor that the solution wouldn't pay for itself? Or does the Atkinson cycle used in hybrid engines mean that the exhaust gases don't have as much excess energy than in the case of the Otto cycle?

Formula 1 has always been a playground for engineers and with the new rules implemented in 2012 the current platforms are running this technology and recapturing energy from the turbocharger and storing it chemically in batteries. The manufacturers doing this include:

Additionally, there are other manufactures doing this. 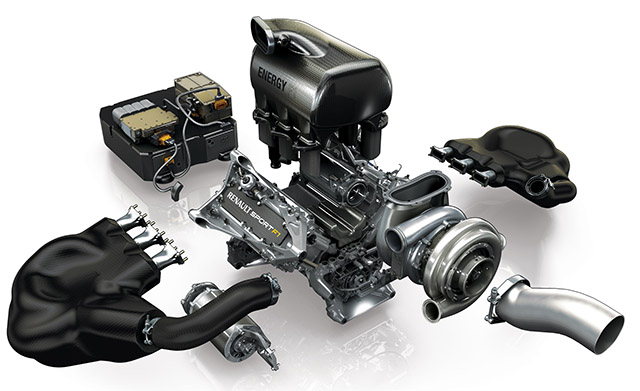 Harvests electricity via a generator off the crankshaft.

This is the component that harvests energy from the turbocharger.

Upon application of the throttle the polarity of the alternator can be reversed turning it into an electric motor. When the MGU-H is in this mode of operation it can pre-spin the turbocharger up to 120,000 RPM's to use it as an ARS to spin up the turbo before the vehicle operator applies throttle. This pre-spinning of the turbo prevents turbo lag and charges the intake tract with compressed air/fuel to provide immediate power once throttle is applied.

Formula 1 is well known to be a proving ground for tech. Devices developed in Formula 1 have been ported to production vehicles for years. Active suspension, variable valve timing, aero tech, hybrid tech, you name it, it has a good chance of being made better in the Darwinian world of F1.

The involved manufacturers are adopting this technology now and it will soon begin to appear in hybrid-turbo 4 cylinders initially.

15
Turbo equivalent on electric motors
-2
Could a wind turbine work for a car?

10
Why do hybrids still use mechanical transmission?
24
Why does a gas engines torque and horsepower curve always meet at 5252 RPM?
3
What is the typical longevity of NiMH battery packs used in non-plug-in hybrid cars?
4
Engine maintenance on plug-in hybrid vs. regular vehicle
1
What is exhaust gas recirculation?
1
What are problems, if any, in connecting accessories to 12v battery in Prius or other hybrids?
5
2010 Ford Fusion hybrid-- terrible gas mileage
4
Is stale gas a real problem with plug-in hybrids?
10
Why is it that when supercharging, it's preferred to compress the input, rather than pull a vacuum on the exhaust?