Differences between pullrod and pushrod suspensions - Pro's and Con's

Can someone please explain the differences between a pullrod and pushrod suspension and provide the pro's and con's of each configuration? Typically these suspensions are used on open wheeled vehicles.

Any visual aids regarding components or function are desirable.

NOTE: Two sources of information on push/pull rod suspensions used for this answer - 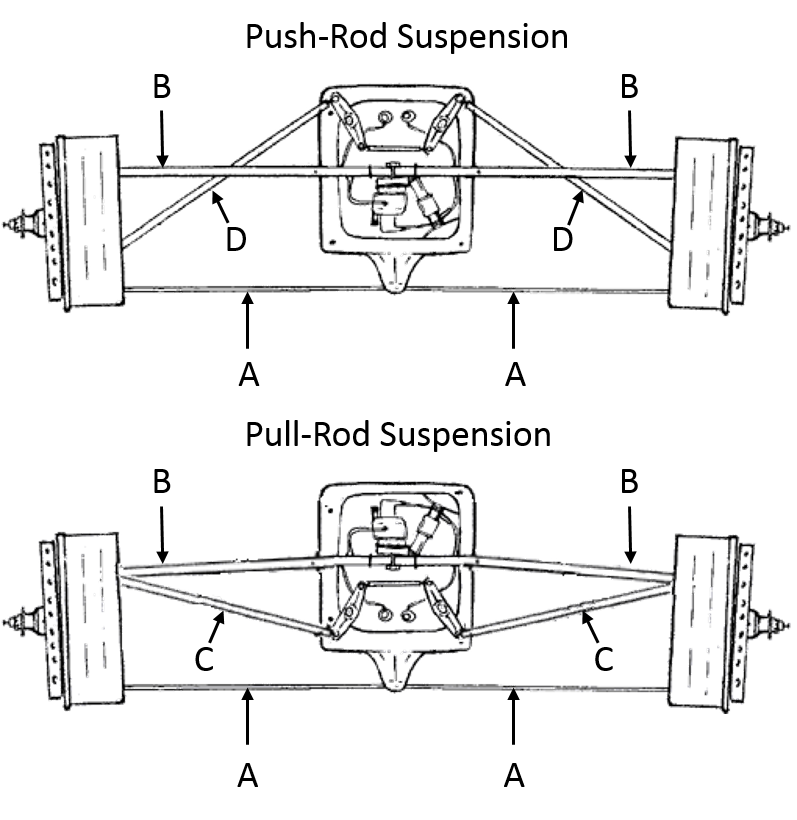 I will first start out by saying the push-rod and pull-rod suspensions are basically the same suspension system, only one is flipped upside down from the other. In both suspensions, there is an upper and lower control arm. Each control arm will have a pivot point towards the inside of the vehicle. This allows for the arms to go up and down at the outside, which allows the wheels/tires/hubs to go up/down as needed. At the outside of the control arms will be ball joints which allows the wheels/tires/hubs to articulate to the left or right allowing the vehicle to turn.

There are also the push or pull rods on each. These are the reasons for the names. The push-rod will be under compression, while the pull-rod will be under tension. These bars are what supports the vehicle on the suspension by transferring the weight to the rocker arms, which are splinted to Torsion bars.

In the above image, the push rod connects to the rockers. The rockers are splintered to the Torsion bars. This also utilizes the Torsion bar as pivot point for the rockers. The dampers act like shock absorbers, quieting the suspension when subjected to heavy jolts. The antiroll bar linkages provide a means by which to help the vehicle during hard cornering to stay level and stuck to the track. The pull system would be setup pretty much the same way, but upside down of this.

NOTE: In the above image, the antiroll bar linkages would not be attached as shown. If they were, it would never work because the center only acts as a pivot and would break (or be damaged) if both sides were hit at the same time (think of a speed bump). Something would have to give.

Inherently, the working parts of the pull-rod suspension can be placed lower in the vehicle, which equates to a lower center of gravity. The problem with this is it makes it harder to get to for tuning or if in need of repair. It is also harder to implement in the rear of the car where you have to deal with the transaxle. Because the pull-rod is in tension under normal condition, it can be made thinner than can a push-rod. The trade-off is that the upper control arm needs to be beefed up to support the load, which is now seeing double duty, so it's about a wash between the two as far as weight savings goes.

As for which one works better, the effectiveness of each is about the same. Each has their own drawbacks when considering aerodynamics. Each rod type suffers from both compression and tension, though at different times. What it comes down to is the picking which one works best for the design of the vehicle.