I have a 99 Nissan Almera 1.6L MTX ( nearly identical to the Sentra sold in the US ) which has developed a problem with low idle, occasional stalling at stop lights, what seems to be misfires and occasionally getting the hiccups, where the rpms will start bouncing between 400 - 900 rpm until it goes away on it's own after a while. This seems to happen only after the engine has reached operating temperature.

At first I was sure that it must be an air leak or IAC problem, but when I shorted the 14 pin Nissan consult to flash any codes, it came up with a Camshaft Position Sensor error. I cleared the code a few times and it keeps coming back. The CSPS is in the distributor, so I opened it up and saw that oil is leaking from the internal O-ring ( not my video ). I'm guessing that maybe the internal bearing might be worn out also, causing it to occasionally stick at low rpm resulting in misfires.

So, while there's clearly a problem with the distributor, I'm still a bit hesitant to drop the money to replace it. The reason is because when the engine starts getting these hiccups and idle problems, if I turn on the A/C that causes the idle to stabilize around 900 rpms. However, if I then give it some gas it goes back to either a low idle or hiccupping, until I turn the A/C off then on again.

So I got a scan tool and some new info:

This capture is at about 788 rpm I think with no loads. The first thing is that it reads lean at idle most of the time, but at 2k rpm it oscillates between rich and lean together with the O2 signal.

Something that stood out to me was the IAC percentage open which seems really high at 78%. If I turn on the headlights, it maxes out at 100% open:

If I turn the lights back off, it drops back immediately to 88%, then slowly returns to 78%.

I turned the lights back on, and once the temp hits 97*C and the radiator fan comes on the idle will drop to the 600's, and start bouncing. If I start turning the wheel back and forth to activate the power steering pump I can force the engine to stall. Which seems odd to me since there is a separate PS idle up switch, same as for the air conditioner. Yet when I turn on the AC, even with the lights and radiator fan already on, the idle up works and it goes up to 850rpm and everything stabilizes:

You can also notice that the injector pulse jumps 50% and the duty cycle almost doubles, even though there's been only a small increase in RPM.

Sooooooo, here's what I'm thinking. This car actually has what seems to be two IAC type devices sitting one on top of the other, one called the Auxiliary air control and the other called the Fast idle control device. I figure the maxed out one is the primary IAC, and maybe it's partially clogged and that's why the ECU is opening it so much. Maybe the radiator fan and power steering idle-up switch are connected to this one, which is already maxed out and that's why problems start when they come on, while the AC idle up is maybe connected to the second one.

I'm wondering if this could account for what seems to be a lean condition most of the time, or if that could be a separate problem of it's own? The thing is that this problem started gradually and it would seem highly coincidental to me to develop both a clogged IAC and an intake leak at the same time.

I opened the idle air screw 3/4 of a turn and now IAC is showing 10% open at idle with no loads, idle stable at 750 rpm, and I can put on the lights, defroster, fan and radiator fan, and swing steering wheel back and forth as much as I like without any problem. I can't force a stall like I could before.

This is idle with no loads:

And this is with everything going, lights, defrost, rad fan and cabin fan: 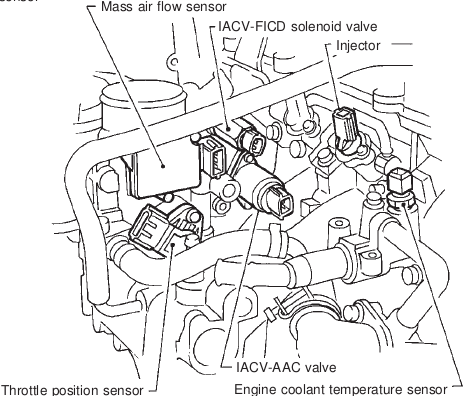 On some of these engine's there is also a Fast Idle Cam ( pg 55 ) which I guess can open the throttle plate, I'll have to go check mine later and see if it has one: 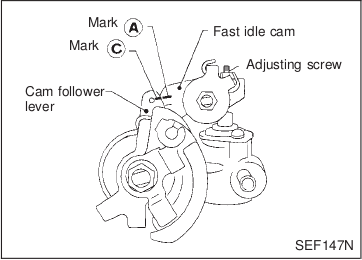 When the throttle body becomes a little worn, it is possible for the butterfly valve to close too much for a steady idle engine speed. The ECM then tries to compensate by opening the IAC more than it is designed to under normal conditions. This can cause stalling and unsteady idle. There will be a screw on the throttle body that allows adjustment of minimum throttle. Try adjusting the screw to open the butterfly valve a little.

Your CPS code won't explain the hunting idle; the symptoms point to a lean air-fuel mixture:

You're going to be flying blind without a scan tool but the top suspects in my book would be an intake leak, malfunctioning idle-air control or an underreading MAF. It seems from your description that the O2 sensor responds well enough to changes in load so I'm inclined to think that it is fine.

Fixing the distributor should help smoothen out the idle quality. I'm not convinced that it will solve the hunting idle.

Not the answer you're looking for? Browse other questions tagged nissan idle misfire distributor or ask your own question.

10
Why Have More Than One IAC Type Device On an Engine?
10
How to Tell if an IAC needs to be Cleaned?
2
Car stalls in idle with AC on
3
1997 Escort idles rough when a/c is off