Should I avoid full throttle when driving with a cold engine?

Normally I just get in and drive normally after about 10 seconds, and then after about 2-3 mins I join a fast road with a hill, and drive along with my foot flat to the floor. It normally warms up to about 85-90 degrees in about 10-15 minutes.

Someone recently told me this is bad, as it "damages my engine"...

How do I damage my engine by applying full throttle when the engine is not up to temperature?

Does also revving over 3500RPM before the engine is fully warmed up damage it?

Edit: I don't drive at the redline. I drive in the middle of the rev range normally, but 5k as a max

Yes this is bad for your engine for a multitude of reasons. In fact, it's not good to run your engine at full throttle for extended periods of time unless the engine is designed to take it, whether it's cold or warmed up. Believe me when I say your little 1.2l Agila engine is not designed to take that kind of stress.

I'll start by suggesting that engines, while having a red line are not meant to live at the red line. In other words, the red line is a point not to go past, but also not a place to keep your engine running at. Very few engines are designed that way (NASCAR and F1 engines are exceptions, that's for sure ... but they are completely warmed up before they are run at the engine speeds they are required to run at).

Another thing to think about is metal can stand only so much stress before it will fail. The stress on metal is accumulative. I've posted this graph before, but I'll post it again because it bears repeating: 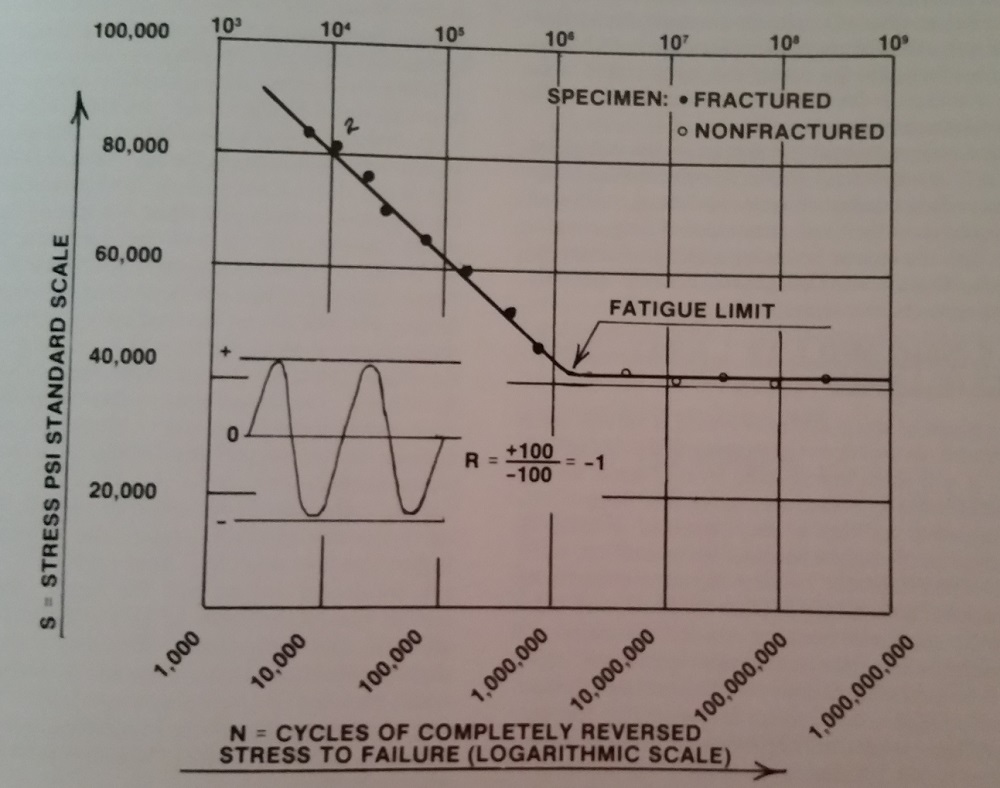 This graph is pulled from a book written by Carroll Smith called Engineer to Win. The graph shows that metal has a fatigue limit, or a point at which repeated cycles will have little to no effect on a metal part (meaning a part will last a long, long time if the stress put upon it is below this level). Above this level, the stress put upon the part detracts from its longevity ... the higher the stress, the sooner the part failure. Like I said, this effect is accumulative ... it adds up over time. About this, Carroll Smith said:

Simplistically put, under repeated (cyclic as opposed to continuous) stress the capacity of a metal to withstand stress gradually diminishes and, in most cases, cannot be restored. Metals which are subjected to fluctuating loads can and do break after a finite number of load cycles (of, more accurately, stress cycles) in which the loads applied and the resultant stresses imposed are always below the ultimate strength of the metal. This type of failure is termed "fatigue failure."

Basically what I was saying, only he says it much better.

Until an engine is fully warmed up, the oil doesn't flow as well as it should through the engine. By putting the extra stress on the engine, you are not giving the engine the benefit of the free flowing oil it deserves. This causes additional stress as well as extra wear on the bearings, crankshaft journals, cam journals and lobes, plus the rest of the valve train. Seals don't seal as well when cold, so wear out faster due to more drag on their surfaces.

There is no magic number I can tell you to keep it under as far as engine speed goes. Just remember what I've said above ... The higher the stress, the shorter the engine will live. The important thing here is to ensure you are not abusing your engine (as it sounds like you are). Pull out easy and accelerate easy as well. If you have to floor it to get up to speed, you may need to think about varying your route to allow for the warm up period. If you have to keep it floored to keep up with traffic, either consider getting a vehicle which can handle the speed of traffic or take a side road which will allow you to travel at a slower speed.

Your engine wears faster when you apply full/big throttle. It is not so bad if your engine is warmed up, and you are not driving like this all the time, this is why you have the rev range up to 6500. When your engine is fully warmed up you can use the high revs for overtaking and going uphill. When the extra power is not needed switch to higher gears.

Applying high revs/full throttle on a cold engine higher the risk of forming cracks in the cylinder head. (Also because of thermal expansion, imagine it: the outer side of your engine is cold and the inner side is getting a lot of heat because of the high ammount of fuel burned inside. If the heat distribution in the engine is uneven enough the cyilinder head can crack.) You can lower the stress caused by the thermal expansion on the engine if you wait with the high throttles until your engine warms up.

10-15 minutes is a lot to reach the operating temperature especially with a hill along the road (except it is really, really cold out there). I would suggest to consult with a mechanic it is possible that your thermostat is not functioning properly. (Left open even if the coolant is cold.)

(Cheap version: in the winter, on older cars people used to cover part of the cooling radiator in the engine bay to decrease the cooling performance allowing the engine to warm up faster.)

If your mechanic says all is OK with your cooling (or you don't want to visit one) I would choose an alternative route for the beginning of your trip to let the engine warm up before the highway.

Chances are the car manufacturer has taken into account the fact that cold engine cannot have as high load as a warm engine. I have a 2011 Toyota Yaris that has a momentary fuel consumption display. I have noticed that when I floor the accelerator pedal, the fuel consumption display shows a smaller value when cold than when warm when using the same gear. I assume the engine control unit is protecting the engine from too much load when cold.

However, your car is so old that it may not have a drive by wire system. If this is the case, there is nothing that could protect the engine from too much load, because the accelerator pedal controls the throttle valve directly. I would avoid fully depressing the accelerator pedal when cold.

I have driven my 1.33-litre engined car up a steep hill by flooring the accelerator pedal practically immediately after cold start every day during the last 3.5 years. I have to do either that or alternatively using a very small gear (and therefore high RPMs), or both using a very small gear and travelling the hill very slowly. No problems observed yet apart from very slight engine sound when cold that might be starting piston slap. However, as I said, the ECU is probably protecting the engine from excessive load when cold in my case.

Not the answer you're looking for? Browse other questions tagged engine opel cold-start engine-theory agila or ask your own question.

21
Is revving the engine to redline on idle at morning bad?
2
Can a tune eliminate the need to avoid redlining a cold engine?
0
Should I accelerate when start the deisel engine
1
Is it damaging to a hybrid's gasoline engine to let it rev high before it warms up?

9
Engine never warms up (actually: it cools down) at highway speeds
5
Does using the entire rev range of a car damage it?
9
Can revving the engine in neutral cause damage?
6
Lack of power when cold under load
2
Can a tune eliminate the need to avoid redlining a cold engine?
0
Idling a cold engine before driving away: contradictory advice
0
Power loss after driving over 15km (engine hot)
1
Accidental brief full throttle on start - any concerns?
4
Which school of thought is right for breaking in engines - keep RPM below 3000 for the first 3000 miles, or rev up to redline?