I'm trying to replace the battery on my 2013 Honda Civic. I gotta take off the hold down bracket but there is a little cap on top of the bracket nut that's keeping the cables (needlessly) secure. Before I do what I'd usually do, break it off, I was wondering if there is a trick in removing this cap? I tried pulling very hard on it and tried using a plier and squeezing the cap and pulling up. Nothing. 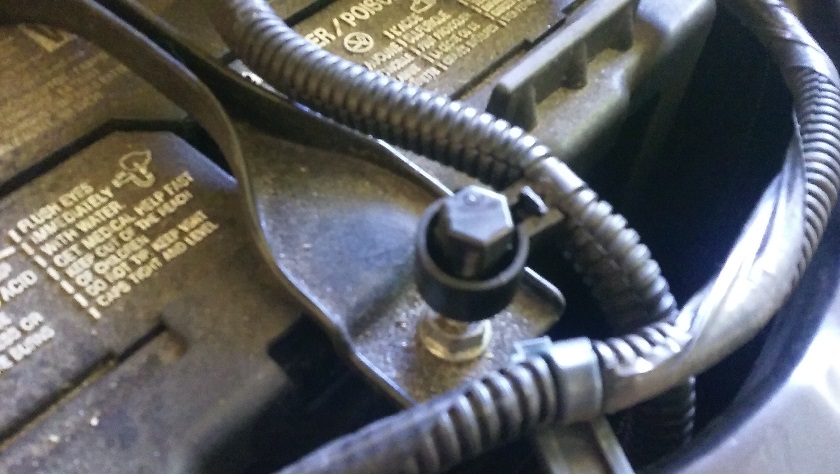 I tried looking online but I can't find anything about it. Maybe because I don't know what that cap is really called. There is a youtube of a battery replacement for the previous Civic model and all he did was pull on it, I tried that, hard, again nothing. Really irks me when car manufacturers do things like this :-(

Just grab hold of it and pull up while wiggling it back and forth. It should come right up. Please view this video as he shows exactly what I mean about 30 seconds in. Don't be afraid of it, just get in there and do it.

Normally this plug comes off by pulling, probably the plug is fused on to the threads due to heat, try pulling with pliers. If it does not comes out break it by tapping in it with a hammer (only the centre bit) and later replace it with a steel nut and some washers. Preserve the plastic clamp (the outer ring )that is holding the wires, dont break it .

I was not able to pull it off with my hand until I took a 10mm socket with a racheting wrench to it to loosen up the connection. I did not hear any snapping or anything sounding like a break when I did this and now I can pull it off easily and put it back on.

It turns out you don't even need to remove the black cap. If you remove the anchor on the front side if the battery, you can pull the battery out.

For anyone who needs to replace the clip/harness strap, it is the same part for many Honda vehicles through the years.

4
Electrical problems due using battery charger as a jump starter
6
Honda civic 2003 dead battery from cold
2
How to find and access the actual terminals of car battery
1
Car doesn't start, cranked at first but now it doesn't
4
White Powder Forming on Battery Hold Down Bracket
1
2007 honda civic trunk screw & peg wont come out
6
Why would I need to press down black and red cables after replacing battery?
2
Replacing Brakes and Having a Problem
1
Why did car just overheat and aftermath?
0
How to diagnose if battery is faulty or alternator is faulty