My girlfriend drives an '01 Sienna LE and for a couple months the check engine light has been on. When I took the van to O'Reilly's and had them check the computer, it came back with the following error:

I've been working with a friend of mine to try and fix it, as he's extremely proficient with cars, but he's also somewhat hard to get a hold of sometimes. Things we've tried:

Light is still on, and he said that now we'll need to take the intake off/apart to get the sensor which is inside near the cylinders. Is there anything else we can try? It's like $130 for a new sensor, plus mechanic fees. We just don't have the money for all of that.

It is more than likely not the sensor. The problem lies in the circuit which goes to the sensor. Replacing the sensor is probably the last thing I'd do in this case.

In this case, I believe it is only a single wire you'd need to trace. It could also be the connector/connection at the sensor itself. In either case, it looks as though the intake manifold will need to come off in order to test the circuit or check the connection. Here is an image of the sensors with the intake off of the engine: 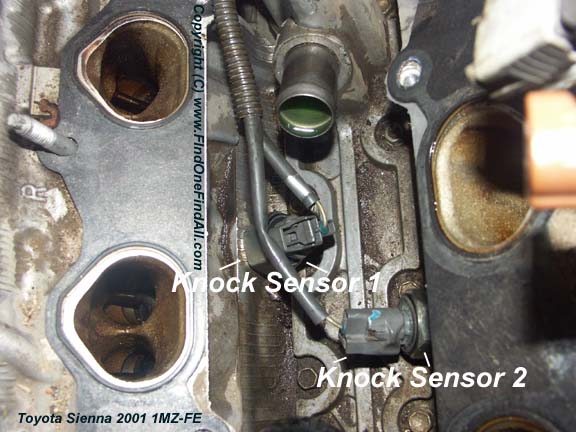 Breaks in the wire usually occur on the engine side of things, as that is where the most heat is located during operation (heat deteriorates things).

Not the answer you're looking for? Browse other questions tagged toyota sensor sienna knock or ask your own question.