Ethylene glycol based coolants should more correctly be called anti-freeze/anti-boil as they lower the chemical potential of the solution when added to water, making it less likely that the resulting mix will move to either the gas phase (boiling) or the solid phase (icing).

I have lived for a number of years in a region where the lowest temperature in winter is well above freezing but conversely I have seen the occasional extreme in summer driving of temperatures up to 48C (118F). The engine temperature gauge in my Forester is usually very stable (partly because the firmware driving the gauge stabilizes the reading when it is within an acceptable operating range) but on this particular day I was driving heavily loaded and of course I had the air-conditioning running as well. I saw the gauge climb into the top 3/4 of the temperature gauge and given the extreme heat, I was VERY glad that I had an anti-boil mix in my radiator.

I think the only place in the US where you could get away without anti-freeze/anti-boil (i.e distilled water only) is Hawaii or Guam, given the thermostatic effect that the Pacific has on the temperatures in those locations.

Edit: As @Paulster2 has pointed out there is a good answer to this question as well and it deals with corrosion issues that I have not covered - Running with straight water as coolant in the summer. Is it fine?

Several things happen when you add antifreeze to water:

Well, this is obvious. While pure water freezes at 0°C, ethylenglycol can put it down to -55°C for a 60:40 (6 parts antifreeze, 4 parts water) mixture. However, it's interesting that the freezing point goes up to -15°C again, if you add more antifreeze: 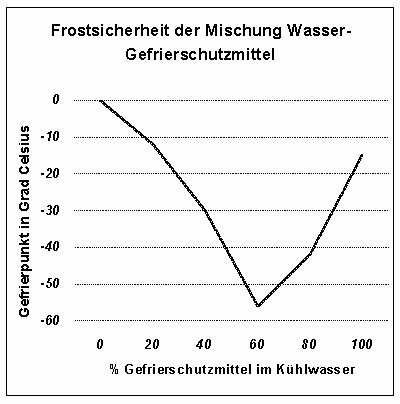 (Sorry for the german. x-axis: fraction of antifreeze in %. y-axis: freezing point) 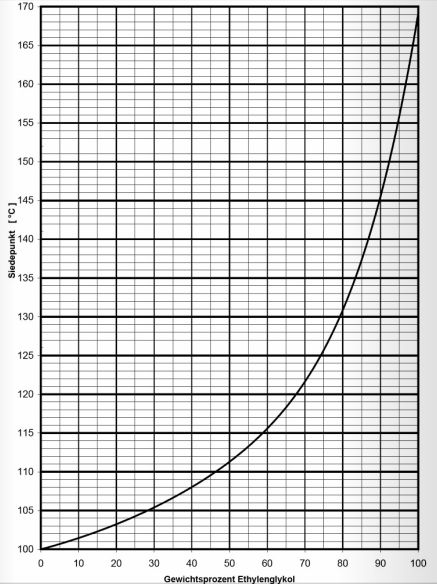 (Sorry again for the german...)

Water has one of the highest heat capacities of 4.2K / (J * g), which means you need an energy of 4.2J to increase the temperature of 1g of water by 1K. Antifreeze has only about 2.4K / (J * g) , and when mixing both, you get about 3.4K / (J * g). This means, your engine will heat up to nominal temperature faster but also, the mixture can not carry away as much heat as pure water could. However, this is compensated by the higher boiling point of the mixture.

Well, you already got the link to Running with straight water as coolant in the summer. Is it fine? . Antifreeze contains inhibitors which reduce limescale and corrosion in your engine.

Note: While distilled water will not cause limescale, it is more aggressive to metal than tap water, and causes more corrosion.

Another point is cavitation. At the water pump (and other places in the cooling system) local spots of strong under-pressure can exist in the liquid due to its fast flow. Small bubbles of vapor occur there, and collapse again when they leave the under-pressure region. When they collapse, they create strong shock waves, which can damage nearby materials. This is what destroys ship's propellers over time and may also damage your pump over time. Antifreeze can reduce the effect.

Long story short:
Reducing the freezing point is the most obvious, but not the only task of antifreeze in your engine. So, use it even when you're in a frostless region.

Not the answer you're looking for? Browse other questions tagged coolant cooling or ask your own question.

30
Running with straight water as coolant in the summer. Is it fine?

10
What happens if I drive without antifreeze in my car?
6
How long does coolant last in storage?
4
Coolant level is below “low” in the expansion tank, dealership service says this is normal?
7
What exactly is meant by “engine coolant”?
2
Overflow reservoir bubbles after driving not overheating
10
50/50 Coolant Dilution after distilled water flush?
4
Corolla not mixing coolant with heater core?
4
Safe to store bike with no coolant?
3
Few questions regarding coolant