What vehicle does this ancient ignition coil fit?

My Father-in-Law gave this Ford branded ignition coil to me today.

I'm curious to know what vehicle it went to, and how it was hooked up originally. Can I easily determine whether it works or not without connecting it to the vehicle it was designed for? 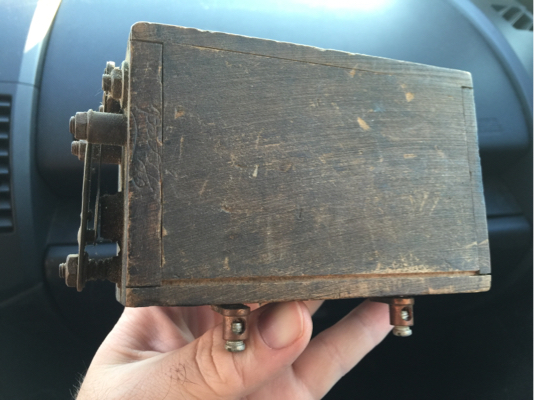 Since you said it has Ford on the case, this would most likely be a coil for a Model T. I don't exactly know how you'd test it, but I found this document from a Model T Ford website. I think it would be very hard to try and test, as there are adjustments of what I'm calling the top (to the left in your picture). There are adjustments needed for the vibrator which is next to the spring and under the "V" bar (again on the top). Here is a detailed image of what the part names are located there:

Here is the basic layout for the entire coil:

Both of the above images were pulled from the website linked above. You may be able to find something which will help you with your endeavor there, as the document seems fairly comprehensive.

Be it known that I, Joseph A. Williams, a citizen of the United States, residing in Cleveland, in the county of Cuyahoga and State of Ohio, have invented a certain new and useful Improvement in Ignition Apparaatus…. (U.S. Patent #1,092,417)

In 1907 the K-W Ignition Company of Cleveland, Ohio had attempted to persuade the Ford Motor Company to adopt their magneto for the Ford Models N, R and S. Although K-W’s attempt was unsuccessful, it appears that Joseph A. Williams, president of K-W, continued to look for opportunities to hitch K-W Ignition Company's wagon to Ford Motor’s rising star.

With the adoption of ignition coils manufactured by the K-W Ignition Company in late 1912 or early 1913 the Ford Motor Company began a business relationship with K-W that would last almost fifteen years. While both companies prospered during the tenure of the relationship, there were times when difficulties arose between them. The most serious difficulty arose over Joseph Williams’ patent on the design of the K-W coil. Here is what is known of the story.

3
How does the ignition system control the Energy of the spark?
5
2001 Ford Ranger 4.0 p0302 Mystery Misfire
3
2008 Ford Escape takes longer to shift into 3rd or 4th gear? Then high rpm at 100km/hr
4
How does this ignition coil work? Why are there two wires, and where should they be connected?
2
2 Stroke engine magneto ignition system
0
2009 Ford Escape Hybrid - Ignition Coils and Spark Plug Replacement
1
Coolant confusion - What type of coolant to put in this thang?
0
Replacing rubber drain plug gasket with a crush washer