I have a 2007 Ford Focus. For some reason my low beams won't work. I've checked the fuses, replaced the relay, replaced the bulbs, and replaced the headlight switch in the dash. Still nothing. All other lights work; high and fog. I'm at a loss for what to do. What am I missing?

This post got way longer than I wanted it to be, but you've shown effort and I have some knowledge that could help you. Please read through this fully before starting any of it.

This is information is based off the wiring schematics for a non-russian 2003 Ford Focus. Surprisingly, the russian model is quite a bit different.

Regardless of if you have HIDs or not your plan of action is basically the same.

There will be one fuse in your passenger compartment fuse panel that feeds your ignition switch and light switch. I'm assuming it's good because you have high beams.

To start our testing there, we will need a tool called a multimeter. Don't be intimidated by electricity. What we're doing is easy.

You need to look for the 20 Volt DC option on the dial. It should look like this: 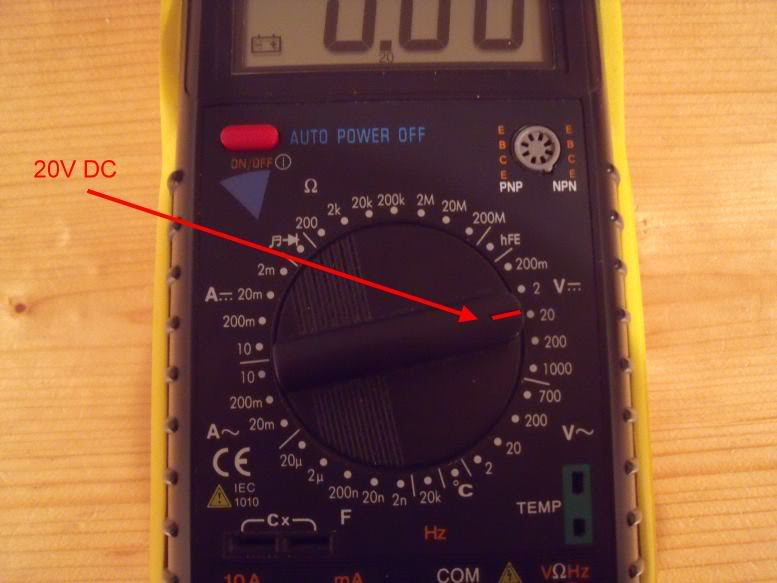 The solid line with three dots underneath it is the symbol for DC.

You probably will want an assistant. Your assistant's job is to just stand there and hold the pointy end of the black wire (called a "lead") to and unpainted metal part. This completes the electrical loop. They only need to hold it there when you are testing something with the red lead.

Now, remove the low beam relay. You should be able to see four slots now.

If the lead won't fit in the slot then you can file the lead so it's thinner, hit it with a hammer, or just push harder and jam it into the slots.

If you don't find one that reads 12V, then there is a break or burn somewhere on the inside of the fuse panel. I do not recommend looking into this yourself unless you know what you're doing.

Assuming you've found the "always hot", turn on the car and the low beams. I know they don't light up, but turn the switch so they're on.

Insert your lead into the remaining three slots and find which one reads 12V. That's your "switched hot".

If there isn't one that lights up, there is a break or burn somewhere between the light switch and the relay.

After the relay, each headlight has its own fuse. So there are two more fuses you need to check. The high beams also each have a fuse so be sure and check the two that aren't high beam fuses. Or just check all four to be safe. These fuses are in the under hood fuse box.

You can even stick your multimeter lead into each of the fuses slots. With the car on and the low beams turned on, one slot for each fuse should read 12V. If they don't there is a break or burn inside of the fuse box. I don't recommend looking into this yourself unless you know what you're doing.

Assuming you haven't found the problem yet, let's test where the headlights plug in. This is going to be the most likely culprit.

Remove each bulb and insert the multimeter lead into the slots of the sockert/connector with the car on and the low beams on. One slot for each headlight should read 12V. If there isn't one that reads 12V, you have a break or burn somewhere between the under hood fuse box and the headlight connector.

The most likely place for it to break is right where the wire goes into the headlight connector. Water is likely here and will cause corrosion. If it's not broken here then follow the wire between the fuse box and head light and look for burn marks or where it has rubbed against metal and it's plastic insulation has worn away.

If you still can't find it, throw the multimeter at the ground, yell, grab a beer, and post an ad on craigslist for a 2007 Ford Focus! :p Actually, you should probably just calmly call a mechanic.

Not the answer you're looking for? Browse other questions tagged ford headlight focus or ask your own question.