Removing oil stains from the driveway?

A few weeks ago, our car seems to have spilled some oil on our driveway. I regret that I didn't ask sooner but I hope it's not too late:

--> What can I do to remove these stains?

As for the car, I'm confused how this happened only once but it doesn't seem to be losing any more oil. There are no other stains than this. 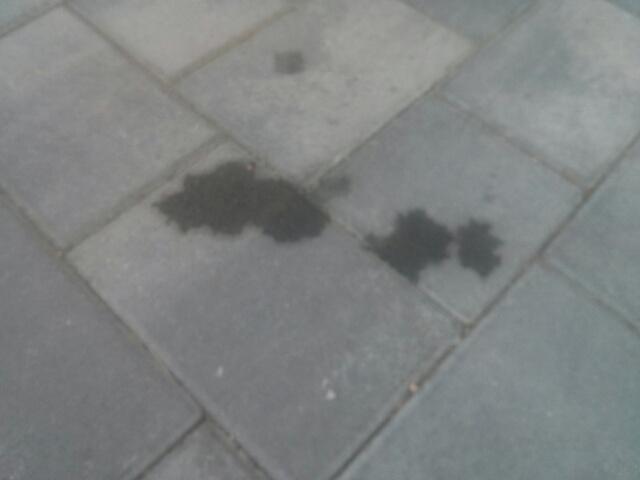 I have used powdered laundry detergent as Speedy-Dri to absorb the oil. Pour it over the stain allow it to sit for several days. Move the powder around with a brush or broom. Sprinkle enough water on it to make a slurry. Using a stiff brush scrub the area then rinse clean. Depending on the porosity of the material it may take two or three applications.

I would use the same procedure in the answer provided by mikes, but using trisodium phosphate (often called TSP) instead of laundry detergent.

It's readily available in home improvement stores, and is fairly cheap.

TSP is more strongly basic than laundry detergent, which is mostly sodium carbonate, so it's a stronger degreaser. It also doesn't foam up, which I prefer.

Since it is more corrosive than sodium carbonate, it's also more irritating to the skin, so you'll want to avoid skin contact (wear gloves and glasses), and avoid getting it on painted surfaces.

Cover the stain with TSP and enough water to produce a thick paste, brush it in aggressively, and let it stand for a couple of days.

My scooter often leaves stains in my garage.

My recipe is to pour fine sand (e.g. for birds from the pet shop) on it for a few days. After, I remove the sand and pour fresh sand on the stains, and pour some cleaning solvent on it. It enters the concrete and dissolves the oil. While the solvent evaporates above the sand, more solvent with oil rises from the concrete into the sand. Finally, all the solvent has evaporated, and the oil is in the sand. May be, you have to repeat the procedure.

While I believe that using cleaning solvent (or even gasoline) is more powerful than any water-with-chemicals, the vapours are highly flammable. You should also not inhale them. And most important for your case: You should never let such solvents get into the ground. So, while it's fine on a concrete plate, it is not on paving stones.

With all due respect to the previous answers, I'm a little confused as to whether or not the most appropriate product is available in your country as it has not been mentioned.

The most effective way of removing oil stains from a driveway is with the product intended for removing oil and grease: Degreaser.

Auto-parts stores usually sell it in spray can for easy application for about $2 a can right up to industrial drums.

Not the answer you're looking for? Browse other questions tagged cleaning oil-leak or ask your own question.

4
Oil on driveway: Will a Belly pan be helpful?
5
Advice needed - My car has burn mark on hood and seems to be leaking oil
2
What causes grey engine corrosion?
3
Removing tree sap from exterior?
2
How to remove white stains from Lumina Dashboard?
2
Oil Leaking in Back of Engine: Fresh oil under the oil filter cooler
1
Oil in coolant recovery tank, how urgent is it?
1
Oil change done wrong
1
Removing wax from motorcycle plastic fairing