I have read differing opinions on what should be used to lubricate cylinder head parts, such as valves, lifters, camshafts and bearings when reassembling cylinder heads. Some prefer engine oil while some prefer assembly lube.

Is it vehicle dependent and what are the pros and cons of the two approaches?

I would not use assembly lube with the valves (in the valve guides), but just oil there. The reason for this is because there is no way to flush the assembly lube out of this orifice like there is in other places throughout the engine.

My preference is to use assembly lube for the rest of the parts. Assembly lube will keep the parts from chafing (wearing against each other) during initial start-up until the oil can do it's thing. As the oil replaces the assembly lube (washes the lube away), all of these parts will be protected.

This approach is not vehicle dependent. The whole idea (as I stated) is to protect the surfaces from chafing on each other. If you are going to run your engine right away after assembly, you can use oil. Oil can give the engine parts enough lubrication to prevent chafing. Oil, however will drain away over time, leaving parts exposed. Assembly lube will stay in place until you start the engine. Personally, I prefer the extra bit of insurance which assembly lube gives you. Think of what could happen if you get side tracked for a couple of days after doing the assembly with oil. You just don't know what might happen, so assembly lube is great choice.

For whichever route you go, if two pieces of metal are rubbing on each other, you'll want to use your lube there. Such as:

You wouldn't need to put assembly lube on timing belts or chains. You can put oil on a chain if you so desire, but considering how they're made, they should not incur any appreciable wear while the engine is starting up. Belts are usually run dry, so no need there. Besides, they are plenty flexible. 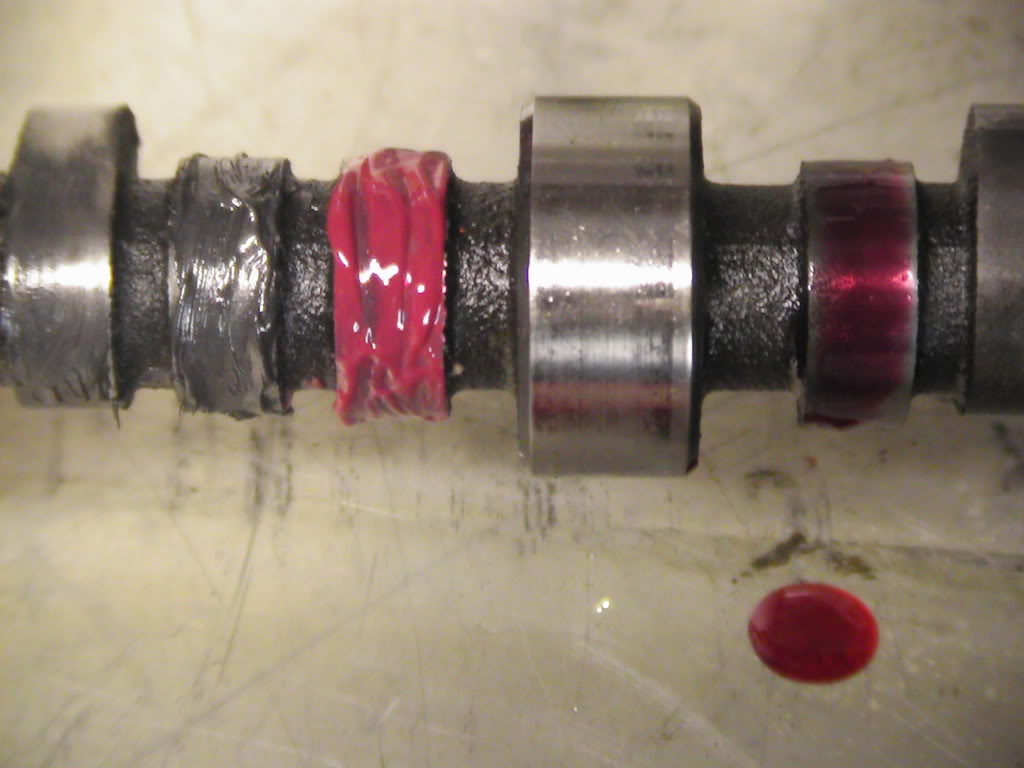 You want to make sure it's more like grease than oil in consistency.

The last thing to know is, after you run your engine for while, you'll want to change out the oil. Assembly lube (especially cam lube) has a tendency to plug up your filter. Also, as bearings and such break in, you'll have fine metal parts in your oil which you'll want to get rid of. After you have about an hours run time on it, change it out. Then change the oil again at about 500 miles.

Paul pretty much hit the nail on the head, but to expand on it once you have everything back together.

I would disconnect the fuel and ignition system and crank the engine over for at least 30 seconds - generally until your oil light goes out on the dash to ensure you have oil pressure.

Doing this combined with either lubricating everything with engine oil or assemble lube you should have no dry start issues and minimize wear dramatically.

Also the different between cam lube vs assembly lube (marketing terms) but the cam lubes generally have a more grease/sticky consistency, where assembly lube is more runny oil like.

Not the answer you're looking for? Browse other questions tagged lubrication cylinder-head or ask your own question.

2
Can machine resurfacing of cylinder heads cause valve malfunction?
4
Why do manufacturers use different bolt types on cylinder heads?
2
Symptoms of valve adjustment necessity
1
Where do you install cylinder heads, camshafts and valves in different engine types?
2
What is the likelihood of a cast iron block needing resurfacing along with its aluminium head?
2
When should assembly lube be used?
3
Assembly lube for engine that has been sitting for years