My 1999 Oldsmobile Alero has been stalling when I come to stop. This happens when I'm driving at speeds of at least 45mph and coming to a quick stop, for instance, when coming off a ramp from an interstate or when coming to a quick stop in traffic. It doesn't seem to have difficulty accelerator or keeping speed (sometimes the automatic shifting seems a bit hard). The stalling doesn't happen every time, but I really don't want to drive the car in this state.

A couple of months ago, I took it in to a mechanic but they were unable to reproduce the problem. This is probably partly because, at the time, I was having difficulty describing the problem. Also, it had only happened 2 or 3 times. But over the past week, it stalled almost every other day.

Last night, I noticed that I can reproduce what the car sounds like before it stalls. When I'm idling, I can rev up the engine a bit and quickly release the accelerator. Rather than smoothly slowing down to idle rpms (700-800 rpms), the tachometer drops rapidly to around 300-400 rpms then bounces back to once or twice to around 700-800 rpms and eventually settles. During the "bounce", the engine audibly sputters in the same way it does right before it stalls. I've not tried, but I have a feeling that if I were to bring the rpms high enough, I could cause the car to stall.

A search online brought up numerous possibilities from one of the senors (TPS, crankshaft sensor), to a vacuum leak, to the fuel pressure regulator. If it is one of these things, it would seem like it would be relatively inexpensive for me to try to fix it myself.

I don't have much experience with automotives, but I'm good with electronics and don't mind getting my hands dirty. The results I'm finding online seem to be all over the place. What are some things I could do to narrow down the problem? Or does this sound like something I should take to another mechanic?

The culprit is probably a sticky or malfunctioning Idle Air Control (IAC) valve. Lucky for you it is located right on top and connected to the throttle body. You can try taking it off and cleaning it, making sure not to play with the pintle (plunger) itself, as the gears inside which actuate it can easily be broken/stripped. Use some carburetor cleaner both on it and in the throttle body area where it comes out of. You may find that the passages are partially blocked.

If cleaning it doesn't work, you'll probably need to replace it. Luckily, they aren't really that expensive.

Here is a picture of what it looks like: 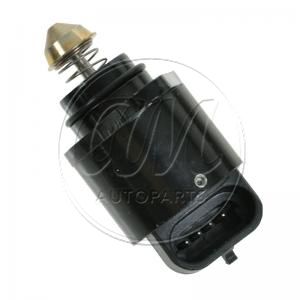 This video points out exactly where it's at. The guy is talking about a high idle problem, but if the IAC isn't functioning correctly (ie: slow to react) it can cause the issue you are talking about.

Not the answer you're looking for? Browse other questions tagged electrical troubleshooting oldsmobile or ask your own question.