I wonder why Lamborghini uses a V12 as it should be the heavier engine. Also due to additional 4 cylinders it has more spinning parts and wearing parts. Shouldn't the V8 have advantages over the V12?

So I wonder why did the Lamborghini choose the V12 over an V8? I find the V8, after the 6 cylinder boxster from Porsche, the best engine when taking agreement between weight, spinning parts, horsepower/torque and space.

Your final sentence is the one that is subjective here. You find the V8 best.

V8's are good, but so are V12's - they have different characteristics and tend to be chosen for those characteristics. A V8 is a lot smaller, so can fit in a smaller space - where space is at a premium that may be the key criterion.

With less space limitations, however, going for all out power and torque may be what you need - in which case a V12 will deliver.

Of course you can also build in requirements like noise or smoothness - both of these are selling points.

Me? I love a flat four Subaru boxer engine - so the above is just my independent view of those strange V-shaped engines :-)

You're taking a particularly narrow view of engine configurations, when there are many more variables at play.

The first is engine balancing; I6 engines (and by extension V12 engines as they are comprised of two I6 cylinder configurations) are inherently balanced and require less additional rotating balancing weight, or balancing shafts (common in I4 engines). For more information, see the following Engineering Explained video on primary and secondary forces.

Beyond that, horsepower and torque are not simply two numbers; they comprise a function over the entire RPM range. Porsche, for example, is notorious for winning races with less peak hp/torque numbers by making higher hp/torque across a wider range.

The Veneno has an improved variant of the Aventador's engine; it's clearly in the Veneno because it would be more cost effective than redesigning the chassis to accept any other engine.

As far as why Lamborghini developed V12s much earlier in their portfolio, I suspect a number of considerations went into that engine selection, including engine bay dimensions available, desired sound, balancing considerations, the notoriety that comes with a V12 engine, power band, and the success/failure of existing designs, among many others.

The primary factor, however, appears to be direct competition to Ferrari:

When Ferruccio Lamborghini set out to provide Ferrari with competition, he contracted Giotto Bizzarrini to design the engine for his car and, according to some accounts, paid him a bonus for every horsepower over what Ferrari's V12 could produce.

The engine was designed from the start to be a quad cam 60 degree V12 - as an intentional snub by Mr. Lamborghini of Ferrari's single overhead camshaft per-bank design.

Just to illustrate the narrowness of your view, "If V8s are ideal in every category, why does the Bugatti Veyron use a quad turbocharged W16?" "Why doesn't everything have a V8?" There clearly more variables to consider when designing engines.

Just for further consideration, the Ferrari 458 Italia is MSRP $239,000, while the Lamborghini Veneno is $4.5 million (based on the Aventador LP700-4, base price $441,000). Cost is clearly more of a concern to Ferrari on the 458 Italia than to Lamborghini on the Aventadors. This leads nicely into the advantages of a V12:

V12 engines deliver power pulses more often than engines with six or eight cylinders, and the power pulses have triple overlap (at any time three cylinders are on different stages of the same power stroke) which eliminates gaps between power pulses and allows for greater refinement and smoothness in a luxury car engine, at the expense of much greater cost. In a racing car engine, the rotating parts of a V12 can be made much lighter than a V8 with a crossplane crankshaft because there is no need to use heavy counterweights on the crankshaft and less need for the inertial mass in a flywheel to smooth out the power delivery. Exhaust system tuning is also much more difficult on a crossplane V8 than a V12, so racing cars with V8 engines often use a complicated bundle of snakes exhaust system, or a flat-plane crankshaft which causes severe engine vibration and noise. This is not important in a race car if all-out performance is the only goal. Since cost and fuel economy are usually important even in luxury and racing cars, the V12 has been largely phased out in favor of engines with fewer cylinders.

Just to demonstrate the 'bundle of snakes' headers of crossplane V8s, here's a racing exhaust setup on one. 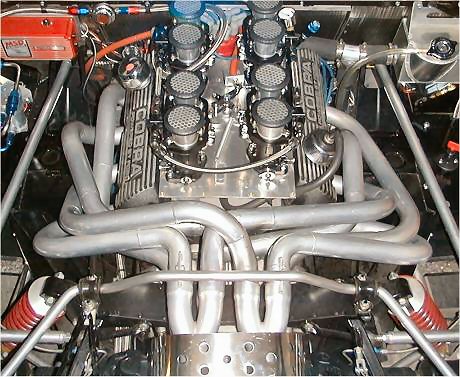 Ferrari and Lamborghini probably used a V12 for these reasons:

The valve area is greater for 12 cylinders than 8 for the same capacity, no. of valves per cylinder and stroke:bore ratio, so it should make more power and rev higher.

The sound. A twelve makes a distinctive, lush, snarling, wailing sound. It adds a certain character and atmosphere to the driving experience. Luca di Monetzemelo said about Ferrari 'the music of the engine' - much like that.

It may be that the Italian car makers, and some others too, value the emotional experience.

Smoothness. More cylinders fire every turn of the crank for a 12 than an 8. The 60 degree v12 is very smooth and balanced without balance shafts. Even if the sound is muted for a luxury car, the smoothness can be a plus for using a V12.

If you get the chance, experience a 12 cylinder car.

Combustion efficiency is important but not mentioned in this thread is the counter effects of thermal (cooling) efficiency. Because the V12 configuration has smaller swept volume per cylinder, there is a greater surface area to volume ratio with the V12 cylinder and, thus, greater heat transfer of the energy into the cooling system! That's why it is difficult to get high fuel mileage with a 6 liter V12. Personal experience with a 6 liter V12 was that the cooling system was marginal to remove the large amount of heat energy produced in the engine. The fuel mileage was at best 15 mpg average and 20 mpg on a long trip. Modern V8s of that capacity will obtain significantly better fuel consumption. Thus, for a 6 liter size, the V8 configuration is more appropriate for balancing power output and fuel consumption. The V12 is more appropriate for larger engine sizes. For instance, WWII Rolls Royce Merlin aircraft engine was efficient and powerful. It's capacity was 23 liters! It had a much lower surface to volume ratio for it's cylinders. I've been informed by collectors that Ferrari chose the V12 because of the smoothness he witnessed with Ford built V12 engines in military transport vehicles during WWII. Ferrari's first car, the 125, was only 1.5 liters in engine size but he chose the V12 configuration! I wonder what the fuel consumption was for that little car? But, for him, it became tradition and mystic to have a V12 engine in the Ferrari cars. Of course they are smooth and sound exotic, but I'll not have another V12 automobile because I don't consider them practical.

Consider the 4-stoke combustion engine ignition cycle; SUCK, SQUISH, BANG, BLOW (with BANG being the only quarter of this four part cycle that actually makes any power). On a V8, at any given time you will have a maximum of two cylinders on their combustion (BANG) stroke. On a V12, the timings are interleaved more so that during the majority of operating times, three cylinders are at some point on their combustion (BANG) stroke. This leads to a smoother power cycle and smoother power delivery.

It could be argued that a V16 configuration is arguably the "best" Vee formation engine but again that is personal opinion and V16's are very few and far between.

Yusuf Kuntoro does not make a good argument. one must compare engines of the same cost, not Russian Lada vs Ferrari..... The engines in Nascar Sprint Cup cars are 90-degree pushrod V8's, just like those that have powered many vehicles on American roads for more than 50 years. But today, the engine under Jimmie Johnson's hood is a custom-made 850-hp 358-cubic-inch engine.

13
Why (almost) all dirt bikes have single cylinder engine?
6
Why don't cars have a cylinder head with separate barrels?
3
Engine turns over, fails to start
11
Should I use open engine oil that was left over from previous oil change
3
my engine over heated
8
Why don't cars use kerosene (and engines optimized for kerosene)?
1
Does Cylinder misfire mean buy new engine?
1
Why would Acura still use SOHC?
1
Which engine oil to use on a rebuilt engine?