For 2 identical car models, 1 being cabriolet, which consumes less fuel?

What is the effect on car fuel consumption of having a roof or not?

I guess it may depend on the car model, but generally, considering common commercial cars, which setting saves more fuel? 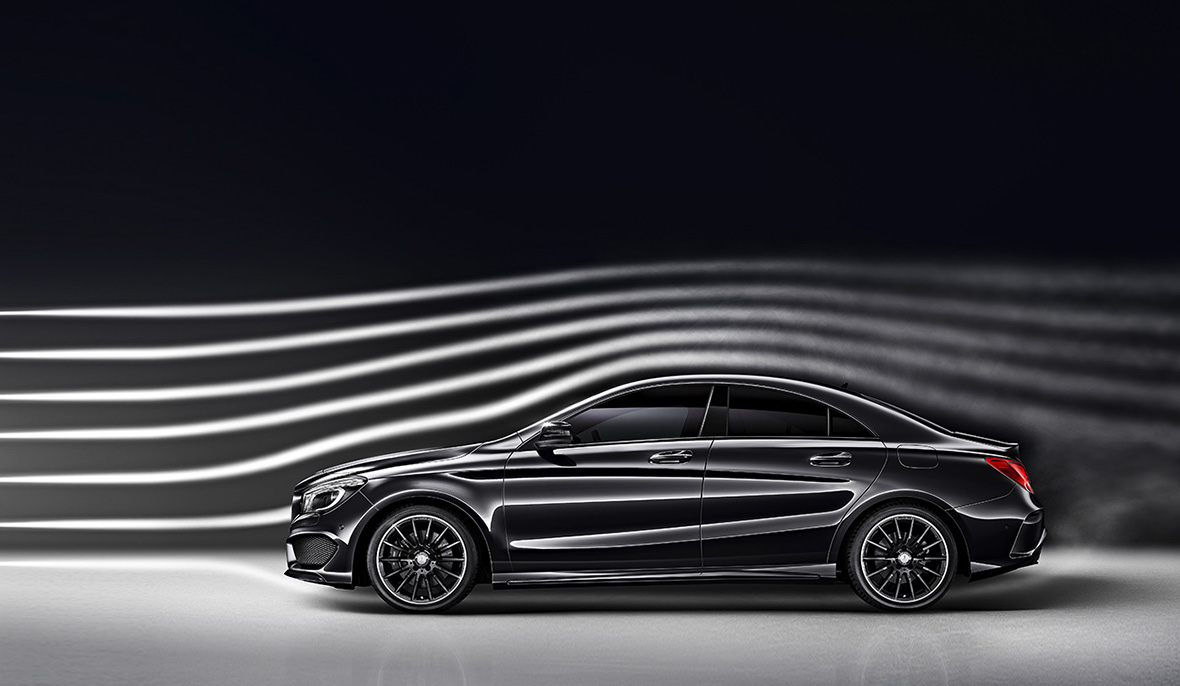 As seen in the above picture, when the air flowing over and around vehicle reaches the rear edge, it creates a light vacuum behind the vehicle, along with an abundance of turbulence and swirling air. This vacuum increases the aerodynamic drag on the vehicle. This is why airplanes taper to a point at the back, so as to decrease the drag on the rear of the plane. I don't have a source, but I believe the highest angle air can adhere to before separating and creating turbulence is 15°. While it would decrease the aerodynamic drag, it would be impracticable and perhaps a little dangerous for cars to taper to a point at the back.

This problem is exacerbated in a convertible, as the last edge for the air to conform is near the front/middle of the car, creating turbulence and causing drag along the entire back half of the car. The last point the air touches, the top of the windshield, creates an even larger vacuum from which to cause drag, as opposed to the sedan pictured, which tapers down to the height of the trunk before significant drag begins to occur.

Which factors have the greatest effect on mileage?

As the other answers/comments have stated, convertibles will usually be heavier than their coupe counterparts. The weight can be attributed to the extra strength required to raise the chassis rigidity that was lost when the rigid roof was removed, as well as extra weight from the motors and hydraulic systems needed to raise and lower the roof.

As user 'Imre' mentioned in a comment, the drag coefficient (Cd, stated as a ratio therefore has no units) of a convertible can vary significantly if the roof is in the up or down position.

According to the United States Environmental Protection Agency (EPA), increasing the vehicle weight by 100 lbs (45 kg) will reduce fuel efficiency by 1-2%. In theory, the ~400 lb weight difference will only account for a loss of 1-2 mpg. Additionally, as Force = Mass x Acceleration, the excess weight should have a greater effect on city driving, as that is when the most acceleration occurs (as opposed to the constant velocity experience in highway driving), though the EPA numbers do no reflect this.

Paraphrasing Max Schenkel, General Motors Technical Fellow in Aerodynamics (source), "a change in drag coefficient of 0.01 is approximately equal to an improvement in fuel economy of .... approximately 0.2 mpg" .... "on the combined city/highway driving cycle". If you took the extreme example of the E550 Cabrio with the AirCap activated, the difference in Cd between the coupe and cabrio cars is .14, which could very much account for the difference in highway fuel economy between the two.

Modern cabriolets have similar consumption numbers with the roof up or down. But that being said, a cabriolet version of a vehicle model would normally weigh more because of all the extra reinforcement needed to stiffen the body in the absence of a stiff roof. This means that e.g. the VW Golf V 2.0 would weigh let's say 1400kg and the VW Golf V 2.0 Cabrio will weigh 1500kg. That means it has to carry around an extra 100kg, which WILL make for worse fuel consumption.

Typically if you're doing any kind of speed, roof up with be more aerodynamically economical although I personally didn't notice much difference on either of mine. That said, I didn't pay much attention to fuel consumption in either of those cars.

Not the answer you're looking for? Browse other questions tagged fuel-consumption or ask your own question.

1
What's the catch in Ford Mondeo Econetic driving at 3 liters per 100 kilometers story?
16
What can cause a car to consume more fuel?
2
Which convenience features in a car affects fuel economy?
8
For how long should I idle at a stop?
7
Volvo 2.0D engine “self-oscillates” after changing timing belt and adjusting fuel-injectors
2
Realistc V8 fuel consumption and values displayed on vehicle instruments
2
Does a black car have worse fuel consumption?
2
Can an exhaust leak cause bad MPG?
0
Am having too much fuel consumption on my Toyota Carina e 1994 model. Please what is the causes?