How can modern turbo-charged petrol engines have such constant torque plateaus over a broad rpm range. Does the mathematical relationship between torque and power still hold here? This looks totally different from a normally aspirated engine where torque and power increase gradually. 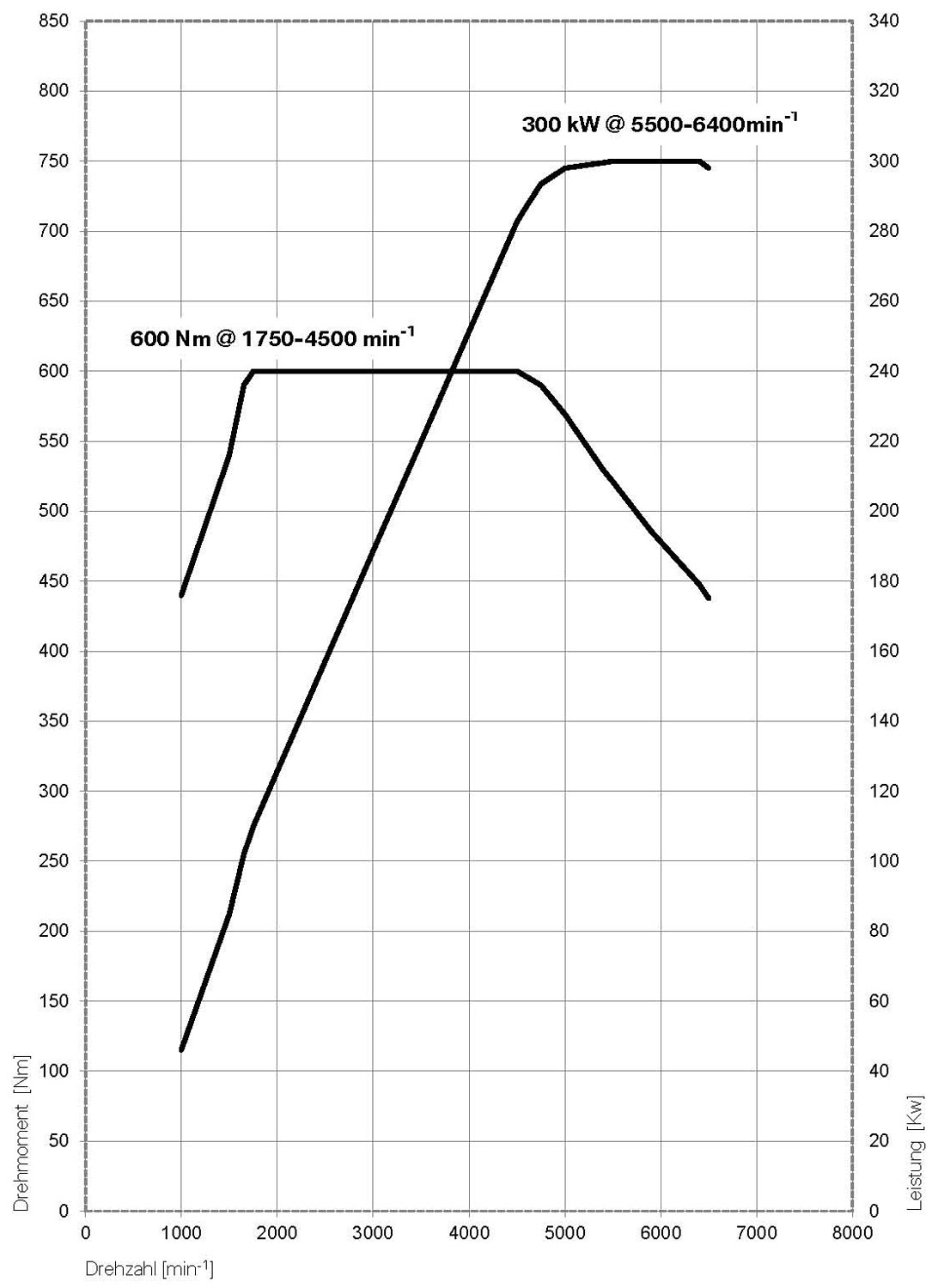 The engine torque produced is a function of the amount of air ingested and the air/fuel ratio combusted in the cylinder(s), combined with 'static' variables like the compression ratio, bore/stroke, crankshaft design, intake length, cam profile, intake and exhaust sizing, etc.

With all the other parameters now static (non-variable) once the engine is built and assembled, and with the ECU controlling the amount of fuel added to the mixture (air/fuel ratio), in gasoline engines torque produced in that engine is now almost entirely a function of air flow. More air in the cylinders = more torque, less air in the cylinders = less torque (speaking of mass here, not volume).

Because of this, in a naturally aspirated non-variable cam non-variable intake internal combustion engine, there will be one (and only one) RPM at which the flow will peak, based on the cam profile and intake length (a hump in the graph). You can tune where this peak happens with various cams and heads and valve sizes, but there is only one. (note: this excludes variable intake length and variable cam systems, see below) 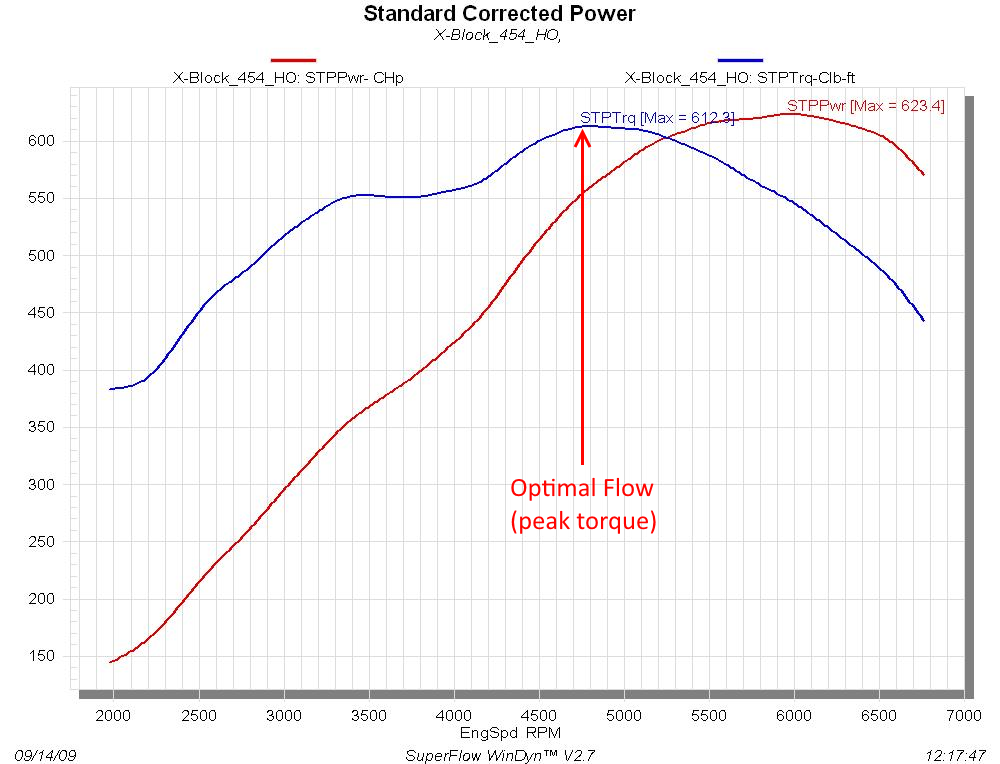 With variable cam profiles, there can be two or more peaks (or even a continuously variable setup in theory) where each distinct cam profile or intake length experiences peak flow (greatest mass charge in the cylinders). This can vary the lift, duration, or both of the valves. Examples of this are Honda's VTEC, Toyota's VVT-i, generically known as Variable Valve Timing.

The intake length can also be varied in addition to or instead of the cam profile, for further (though usually smaller) local maxima along the graph (sub-peaks). Examples of this are Mazda's VRIS, VW's variable intake manifold on the VR6, Yamaha's YCC-I 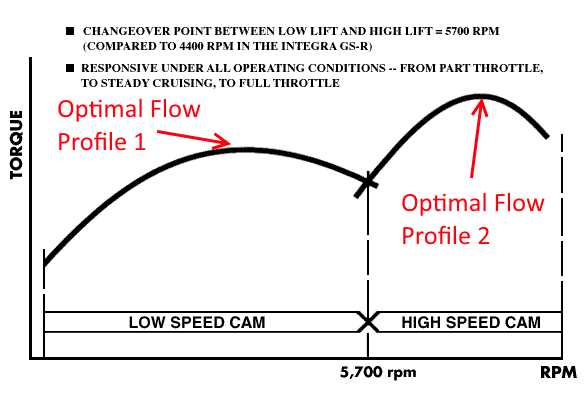 Now, let's consider forced induction. With a capable compressor (either supercharger or turbocharger), it will be capable of a variable mass charge through the RPM range. For a number of reasons, bypass/blowoff valves, wastegates, clutches, and similar devices limit the amount to a known value, typically based on pressure (say, 21 psi). At this pressure, if we can assume a constant temperature (which we can't in practice), that would yield a theoretically constant mass of air entering the cylinders under sufficient boost. With a set mass of air, and an ECU injecting a corresponding amount of fuel, the engine will produce a constant amount of torque.

Each detonation event will experience the expansion pressure of that set amount of air mass and fuel, and your torque line becomes flat as 21psi of air is forced through the pressurized intake in a constant way (unlike the variable draw of natural aspiration). This will fail to be 'flat' when the compressor is unable to produce more pressure than the regulated amount, which will happen both when the compressor isn't spinning fast enough (too low of RPM) and when the amount of air flow the engine requires at an RPM is greater than the compressor can provide (too high of RPM). 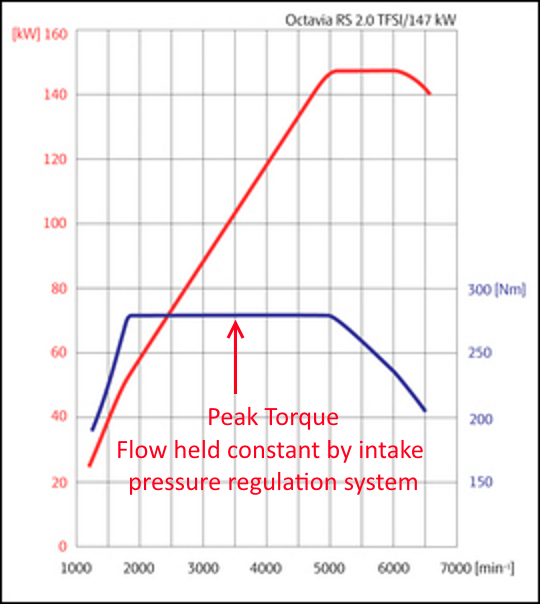 Now in theory, if your engine components were overbuilt to handle lots more torque than they would need to otherwise, you could remove the wastegate/clutch system and to deregulate the peak pressure, essentially allowing the flow characteristics of the compressor to define whatever peak it could produce, all the way until the compressor is so outside of its efficiency that it's heating the air charge (and thus expanding it) so much that it's either causing predetonation, causing components to fail, or reducing the effective air mass even with higher pressure, or some combination thereof. 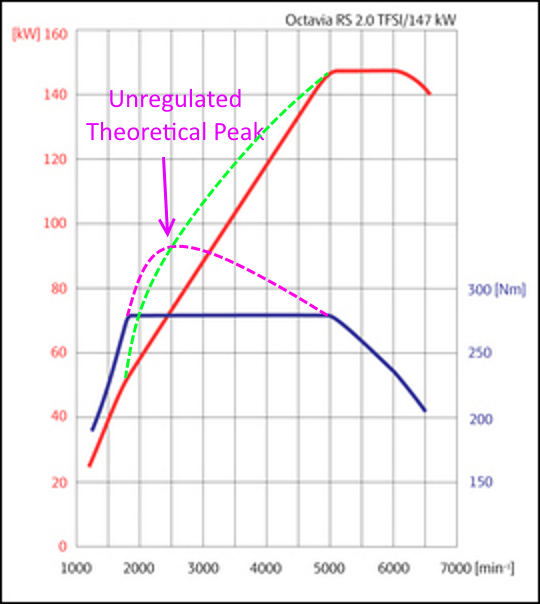 Also note that there is a big difference between a 'theoretical' dyno chart, with perfectly flat/smooth lines, and a 'true' dyno chart as in practice. Even with a perfectly regulated forced induction system at a set pressure (21 psi in the above example, 7.5psi in the graph below), there will be slight variances due to the temperature and flow characteristics of the intake and cam system at various RPMs, which can lead to slopes and small peaks/valleys in the 'flat-ish' region. 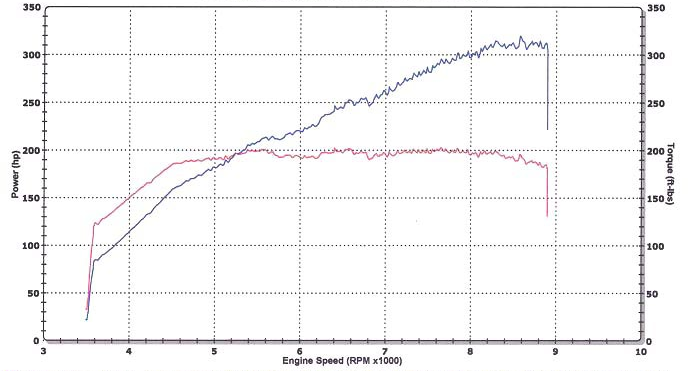 It would be possible, in theory, to introduce artificial variable restrictions in a naturally aspirated engine to produce the same results, but it would just be wasteful. Alternatively, if you could design a perfect continuously variable cam and intake system, perhaps that system could (in theory) get to a constant air mass and thus flat curve.

The reason the pressure regulation is done with forced induction typically have to do with design constraints, such as the price to overbuild the components to handle the short torque spike, including possibly everything from fuel injector sizing to piston and rod metallurgy, and the corresponding hit that will be taken in reliability for very small gains.

Typically engines have to suck in their air and fuel so they can only suck in an optimal amount in a certain range. With a turbo you are forcing the air in, so the engine can make more torque over a wider range. If there is a max torque the manufacturer wants to set (for torque limit on the transmission/drivetrain), they can set a boost limit so there is a flat torque line. Shelby did this with the GLHS, they made max torque over a 2000 RPM range.

That's not a realistic flat-torque graph. It should look more like the following in the real world: 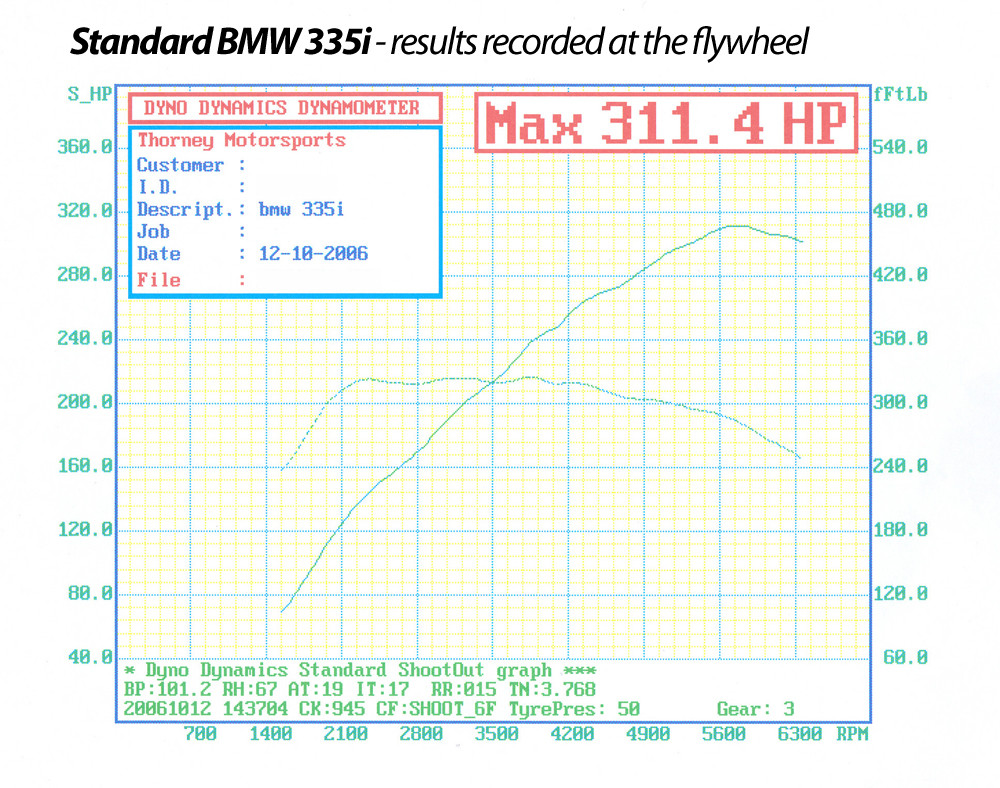 Although you woold find that the horsepower v torque holds true if you apply the calculation at any point on the RPM band.

1
Engine torque throughput curve is flat or wavy in low gears between 2000 and 4000 rpm
1
Why are engines mounted so that torque goes sideways?
1
RPM AND TORQUE IN INTERNAL COMBSUTION ENGINES