I had a engine tune up and changed my injectors (8 injectors) last month and after 2 weeks i started getting a slight knock (jerk or shaking). i remember i have had this once or twice in the last 6 month but it wasnt noticeable and looked like to be as a miss. anyway, now everyday morning when i start the car and drive for like half and hour or hour, it goes smooth and nice. and then in a while it gives the knock. (the time is not fixed, some days in 45 minutes, and some days in 30 minutes and sometimes in 20 minutes after first starting to drive it comes)

The knock is like, when i stop at a traffic light and accelerate it comes. it only comes after a break or a stop and accelerate so it comes in low speed. then when driving with the knock, it gets a bit worst and knock (jerk or shaking) goes up, when i drive a little more it becomes more worse. then when i stop for few hours and start back then knock (jerk or shaking) is less and smoothness is bad. so i figured out this is something to do with a heat. when one of vehcile's part becomes very hot it gives the knock.

so i went to a small mechanic and as advised changed my Gear box oil (ATF). it didnt fix the issue.

then i took it to Honda company by when i got a check engine light and they told to run without the EGR valve, then i did it that and noticed that knock (jerk or shaking) is 50% less but car is not at all smooth. (it takes too much power and was hard) i felt so when driving. then they told to clean it the EGR and drive as the Honda company diagnosed EGR valve is causing trouble. after cleaning it didnt work, so as they told i changed the EGR valve which costed around 500$.

And then my vehicle was super smooth and very very comfortable to drive. later after few hours of driving here comes the same knock (jerk or shaking). which confused me. apart from that the honda company told this is not a problem with gear box, (which means they told its not a judgger)

Then i took it back to my local bass as he suspected it can also sometimes cause with fault fuel pump. then i changed that too. still the issue is not fixed.

Now after having a small internet research i found this is a bit common issue, but only issue is finding the exact issue is difficult. Now i am confused what to do,

Company told they will need to remove the transmission and see in the worst case. some times if its a damaged flyweel it can happen. so before taking it to any place to repair i just want to get an experts advise here.

Should check in to these things to ?

I really really appreciate any feedback that will help me to sort out this issue.

UPDATE: The company also told me that not all issues will have an error code that can be read through obd 2, electrical issues will be displayed but not mechanical as they told. is that correct?

Yesterday i had a fuel pump change as well, but still the issue is there, please can somebody advise as what to do ? really appreciate. can this be a gear box issue with a burnt flywheel ?

Yesterday i had a test drive

then at almost every stop light, when i accelerated it came. and when i took of the leg from gas pedal and pressed again, it went but not smooth as early.

after that vehicle was back to a drivable state but shake was there still after a stop or break when accelerating.

Can anybody provide some advice based on my latest information please?

Yesterday i had a injector clean at honda company and they told its all fine. when i started to drive the car today again the bucking or knocking came up and car wasnt smooth as before. when eco mode was on it started to knock or buck a little more. i think A/C also has a connection to this. when AC was off and ECO mode was off. knock was less. so i turned it off and drove but still its annoying to drive. its dancing like a horse when starting at a stop light. can this be related to eco system in gp1 and EGR valve? but today i noticed when the egr valve was disconnected just 1 hour ago, car wasnt smooth but knock or buck didnt come which came while i was driving and half a way i stopped and disconnected the EGR Valve and continued and found no problem. i know its not good to drive without egr valvue so i connected it back after checking.

can the problem be with EGR valve sockets ? because the EGR valve i have put is from a second hand vehicle but a less mileage and it looked almost new. i would say no carbon. so is there anything else connecting with EGR valve like the socket that connects EGR valve and the engine ? what is EGR Passage ? should i clean that too.

what problems will i have if i remove the EGR valve and drive, i got a engine check light once so didnt want to drive with that removed.

I got it confirmed that its a problem with CVT Gear Box, a past automobile engineer at honda found the issue. he took a long drive with me and he changed parts with a another same running vehicle. in the start gear of CVT something is wrong and he suggested to get the gear box replaced. replacing is better than trying to fixing.

There was also a problem with a injector and coil, so he fixed it and vehicle is smooth now only the knock comes once in a while. (which will go away once the gear box is replaced)

This answer is a bit hypothetical; please take it as one path to follow, that may be useful in this and other, similar, cases.

Perhaps the clue to the problem is not in the spark plug (or injector?) replacement, but rather in this part: "I had a engine tune up".

While we do not know if the OP had this performed at an official garage, if this was the case it is very possible that an ECU re-flash was undertaken, according to periodic instructions given by the manufacturer. ECU mappings go through a review process, as does software in general, going to version 1.1, 1.2, 1.3, etc. (One hopes not initial versions starting with zero: 0.1, 0.2, as these would be pre-release - though some have been seen to subsist in production models through error.) Successive versions fix bugs that have come up in previous ones, and are often applied by the official garages during standard maintenance as a matter of course.

However, newer versions of ECU software can also contain there own errors, newer bugs that were not present in the initial version loaded on the vehicle as it came out of the factory. This explanation would be consistent with the symptoms observed by the OP: injection mappings would be just a bit off for a certain combination of the parameters (temperature, pedal position, revs, etc.).

The solution in this case would be to have the car re-flashed, with a more recent version of the software - fixing the new bug, and hopefully not adding more bugs to further mix things up. Just having a quiet chat with the repair person (i.e. the guy/gal who really fixes your car, as opposed to just manning the front desk) can often confirm this supposition, without even needing to take anything apart.

I have recently come across a similar case of jerk/knock on 2014 Ford 1.6 TDCI, so this type of electronic hiccup is not limited to one particular manufacturer. The electronic guru in that shop went: "Oh yeah, we know about that one. Just bring it in and we'll have it 30 mins on the computer. No charge."

I suspect issues in two components of your car but since you have already mentioned that Honda people have had a look not 100% sure. 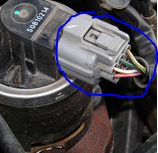 Note: If i was in your place i would ask a honda service person to ride with me and escalate the issue , honda is 100% liable to provide you with a solution Do not go easy on them , since your are ready to pay for(and have already paid) the solution. I feel honda is being lazy.