Within the last year the '1' and '4' preset buttons on my radio stopped working - at first you could play around with them & moosh them a little harder and they sometimes worked, but now they seem to be completely dead.

Is there some other way to enter the code, or to bypass it somehow?

We have the 2006 Odyssey with Navigation & Leather Seats package.

Update: I have the radio out and I took off the front controls - I can't see how to detach the circuit board from the black housing, though. After removing the 9 smll screws from the back of the circuit board, it seems like the three round control knobs on the front ought to pull off, but they're really on there tight. Does anyone know whether I just need to pull with more force, or is something else going on? Here's a picture of the knobs I mean:

Also, there's an outside chance that the failing buttons were caused by a loose ribbon cable connecting the control panel to the radio body, because when I detached the control panel, one of the ribbons was loose. But that's probably just because I yanked it loose while disassembling - there's no latch keeping them in, just the friction of the ribbon cable connector.

Update 2: yeah, I just needed to pull the knobs with more force: 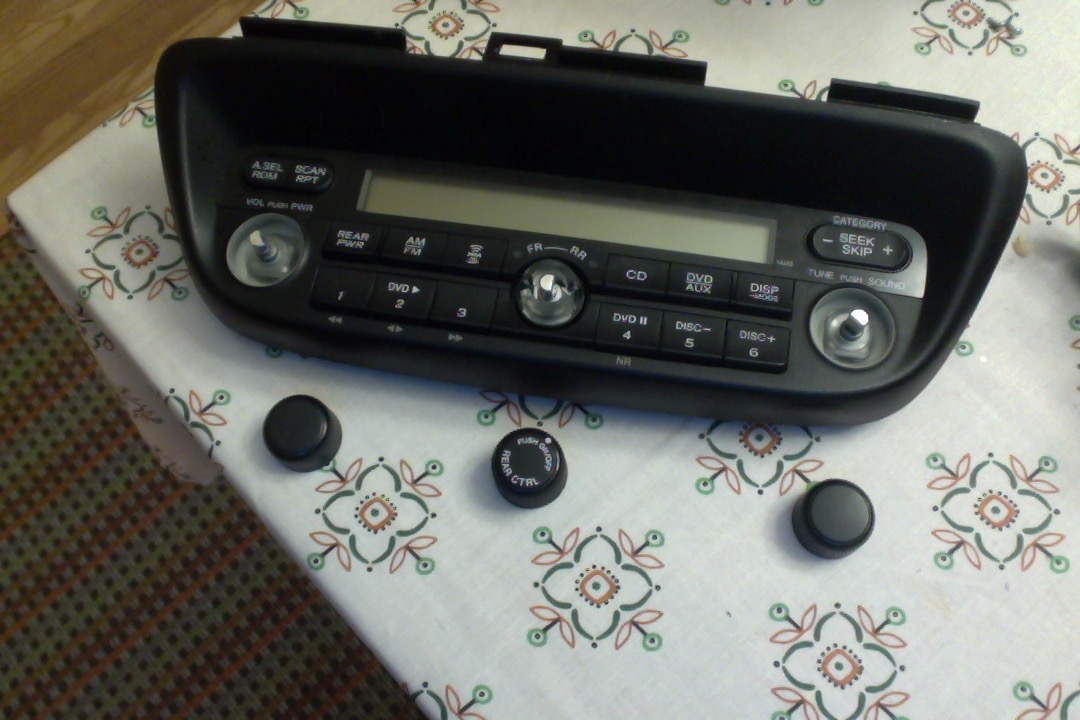 Once I got the circuit board off, I could see the switch components. They're through-mounted normally-open tactile switches, and they seem to be sealed to the elements, so I sort of doubt they've gotten dirty contacts. I tested them out with my multimeter (easy since they're through-mounted) and all 6 preset switches do seem to be functional - sometimes they seem reluctant to fire, but it might just be my meter probes not making great contact with the solder. In any case I don't think I'm going to de-solder these things and put on new ones, that's a little above my pay grade. I might just put the whole thing back together (tomorrow - it's late!) and see whether maybe I get lucky & the ribbon cable was just loose.

Update 3: Well, I blew the connections & buttons off with compressed air, put the whole thing back together, and the 1 & 4 buttons still don't function. So I guess I'm going to look for a front-electronics replacement panel to stick in. Maybe I'll put in an iPod connector while I'm at it.

Thanks for the help & advice.

As Paulster stated in the comments, if the buttons are indeed broken, then there's no way to enter the reset code (assuming the code has a 1 or a 4 in it). Your best options are to take the stereo apart and attempt to clean the button contacts using compressed air or a electronic safe solvent, or find a different stereo to install (try your local scrap yard).

Not the answer you're looking for? Browse other questions tagged honda audio security odyssey or ask your own question.