How do you test analogue electrical circuits?

When trying to diagnose problems with conventional analogue electrical circuits, such as lights, speakers, heated rear windows, etc, as well as short-circuits and unexplained current draws, it can be difficult to track down the exact source of the problem. What is the best way of doing so?

Additional Tools that you May Want:

For all testing, make sure to find, print, and understand the wiring diagram for your car, it will make your life much easier if you can use the diagram to determine the expected connections, voltages, and signals at any node where to find them

The difference between Category 1 and 2 is that 1 is before the fuse box (directly to battery with fewer protective elements) and 2 is generally fused circuits. Greater precautions need to be taken to avoid crowbarring the battery, whereas a fuse will protect you from mistakes. Category 3 will require some additional or specialty tools. However, elements of category 3 will have some overlap with 2, you can verify some very basic functionality without busting out a sniffer (test power supply to components, shorts and breaks)

Here everything is about long and convoluted harnesses, fuses, relays.

With the wiring diagram in hand the First stop is to identify the relays and fuses that are controlling or protecting the circuit believed to be at fault. Verify Continuity between connected nodes (e.g. if the fuse for the headlights connects directly to relay, verify - with the battery disconnected - that there is continuity between the fuse panel and relay panel). Verify/replace fuses and relays. Continuity check everything you can to eliminate harness/wiring damage.

After a basic continuity check we can move on to signal verification tests. With the battery connected you can test voltages at key points on the circuit. Relays that are supposed to be on will have 9-12V on the control pin, verify power at the fuse panel by removing fuses and checking the voltages on related pins. Where you expect a voltage make sure you are reading a voltage. You can compare the voltages on every pin of a relay socket with relay installed and relay removed (this is where connector jigs come in handy) , this will help you further narrow the problem search. You can use the wiring diagram to unambiguously determine which circuits should be on/powered with given switch/key positions. Any signal pins that go to the ECU (related to the faulty circuit) should be noted and tested later.

Functional tests can be performed on most components. Using a 12V supply that is not the car battery you can check relays, pneumatics/valves, lights, fans. etc. by connecting the supply across the relevant pins. Lights will turn on, pneumatics will tick, relays will tock, fans will spin, and pumps will whir.

Verifying ECU and sensor functionality can range from easy to complicated. The most basic check you can do is to verify that the power supply lines to these devices have the required voltage (can typically be done right at the connector) and verifying the relevant fuses and relays supplying power to that circuit.

If the supply is present then you can dive down the rabbit hole of troubleshooting sensors and computer electronics. The first step is to verify that the device is functioning, this will require looking up the part number determining the signal the device supplies to the ECU. Analog signals can be read using a DMM, digital signals will require a sniffer or oscilloscope. You can also test with a known-good device.

If the sensor appears to be functioning but the relevant system is malfunctioning the best bet is to take a CAN sniffer (the majority of intelligent sensing elements send their data to the ECU with a shared bus called CAN) and capture the communications data. It may be difficult to interpret the communications, but in general I would suspect the following . no signal - Broken connection, dead/damaged device or ecu. gibberish data (Look at the data sheet for the device to see how it formats data)- Damaged device, digital noise/damaged wiring , corrupt ECU.

To track down and troubleshoot electrical issues, you will almost certainly need a multimeter (also known as a Volt-Ohm meter) - digital ones are best, like the one illustrated below (from Wikipedia)

You can get cheap ones, which are fine for most automotive stuff, or much more expensive ones with all sorts of clever features.

The two most useful things for car work are the DC voltage setting (The V with solid and broken lines above, at 10 o'clock on the above picture), and the continuity tester setting (the sound-wave and ohm symbol at 12 o'clock)

To check whether a circuit has failed, one of the easiest ways is to see if 12v appears when it is turned on. I'll use the simplest example of a light that isn't working. Set the meter to DC Voltage, and switch it on. Remove the bulb, and switch on the circuit. Hold the red lead on the meter to the contact in the bulb holder. At the same time, hold the black lead to a clean, metal part of the car (for example, the engine block) - a 'ground'. If the circuit is working, you should see '12' (or something near, e.g. 11.9 or 12.1) on the display.

You can demonstrate this easily by touching the red lead to the battery terminal, and again touching black to ground - you should see between 13.5 and 14 volts for a normal, healthy battery. Alternatively, for a safer demonstration, touch the leads to either end of a domestic 'AA' type cell - this should read around 1.5V

If you know a circuit has failed somewhere, you then need to work out where. You have two options for this - either keep working back along the circuit with the meter as above, or test each section for continuity (or, more usually, both).

To test for continuity, set the meter in continuity mode, and touch the leads together - you should hear a beeping or buzzing, and see a low number on the screen (e.g. 0.0001) - this means there is a low resistance between the leads. Separate the leads again, and the buzzing will stop and the screen will usually show '1' on the left hand side - this means there is no connection between the leads. Hold the leads either end of the part you want to test (e.g. to the two terminals of a bulb) - if the circuit is complete, it will buzz.

There are certain failures that commonly occur with automotive circuits...

Broken wires are rarer, but not unknown, especially with circuits that pass through the doors, such as electric windows, central locking and power mirrors, as the wires passing into the doors are flexed every time the door is opened, and can fatigue and fail.

Of course, a lot of modern cars also have loads of ICs, buses and computers controlling everything, but they're a subject for a different question...

More on using a Multimeter

Sparkfun have a guide on using meters, with loads of pictures:

Aimed at hobbyist electrical stuff, but the principles are the same here...

I'd like to add to Nick's answer and mention a Circuit Tester if you need to simply test the circuit for power. 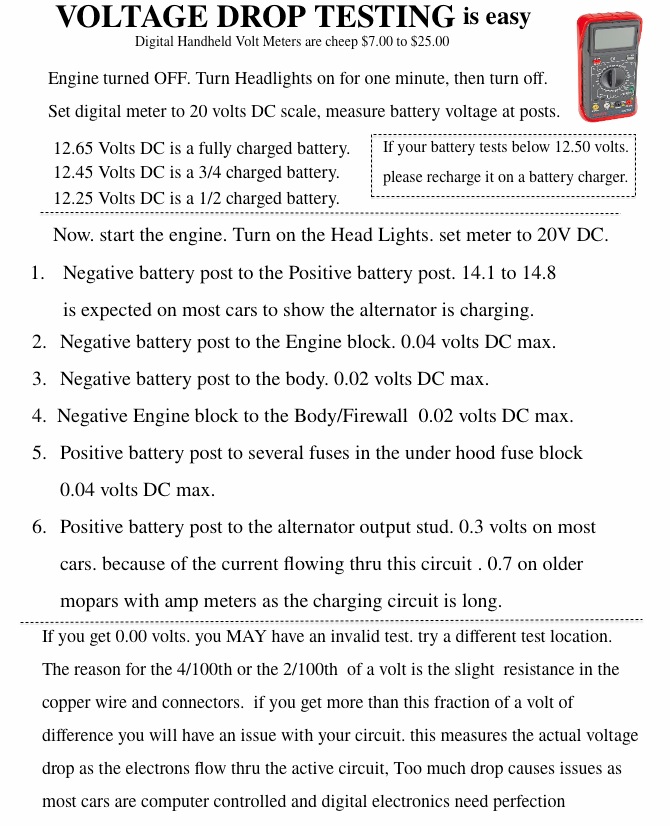 Adding to the accepted answer: A good tool for tracing unexplained current draw would be a current clamp, suited for DC measurements in the milliampere range

Not the answer you're looking for? Browse other questions tagged lights fuse electrical multimeter or ask your own question.

15
Multimeter - Basic Functionality and Howto
6
How to Track Down an Electrical Short
0
What to check when my car has an electrical problem?

4
A/C electrical problem on 92 Civic
6
How do you test relays?
9
How to amplify car speakers without stereo?
6
How to Track Down an Electrical Short
5
How to Test an Ignition Coil with a Multimeter
10
Why do attempts to charge a flat car battery with an electronic battery pack give results as if there's a short circuit?
12
How to test a bolted-in heavy duty 50a / 80a / 100a fuse with a multimeter without removing it?
3
Audi A3 (2001) battery not charging
1
Circuits for non existent devices
12
Car won't start, horn won't honk, headlights won't come on, what could cause this?