Is it safe to overload the roof rails? 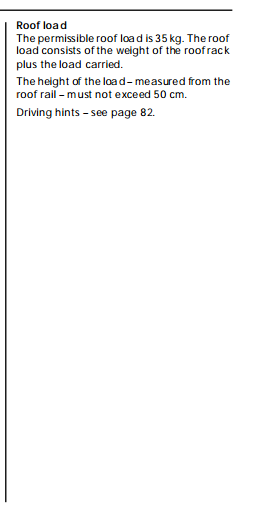 According to the manual, the "permissible" load for the standard rails is 35kg. I need to take two Kayaks around with me, which in total weight is about 40-45kg.

Would I unintentionally turn my 2003 Opel Agila into a convertible by putting 45kg on there and then doing some motorway driving (70-80mph)?

Would this be safe?

Note: I cover up the cockpit of the kayak, so it doesn't turn into a massive sail.

Here is a similar setup to mine: 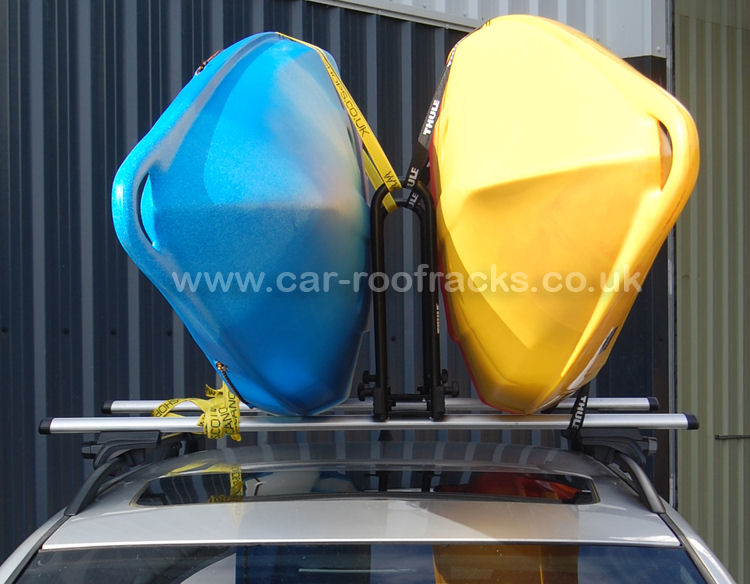 Would this be safe?

tl;dr: No. It's hard to say exactly how unsafe or how bad the consequences might be.

Assuming the rails themselves weigh on the order of 5-10 kg, you're talking about almost doubling the advised load on the whole system.

From reading that advisory, it's hard to say exactly what failure modes their mechanical engineers are expecting. For the sake of discussion, let's assume point loads as well as shearing and twisting forces (all of which seem reasonable given your "two kayaks driving 80 mph" scenario).

Assuming the rails themselves weigh on the order of 5-10 kg, you're talking about almost doubling the advised load.

Shearing: Kayaks are always big sails, no matter what you cover. Any cross breeze (which can be significant at these speeds) are going to act to try to pry the cross rails away from the base rails. I'd also expect them to try to pry the base rails away from the vehicle. As the connection points will now have some extra play, shearing will be that much more effective.

Twisting: I'd expect this to be fairly dramatic. Every time those big sails take even a slight angle to the wind, they'll be trying to twist themselves right off. Again, this will be working all the connection points and torquing the rails in ways with greater mass.

Will any of this lead to the rails ripping off the roof? That's hard to say.

I wouldn't be surprised if the rails rattled quite a bit after this trip and were significantly bent. At that point, the whole system is compromised and you can't confidently expect that it will safely hold any weight. Anything like that would make me crazy since I'd know it was my fault for breaking my car.

Best of all, if you consider all this and do it anyway and something does go wrong, it's on you. The manufacturer has made it clear that you've gone well outside their engineering guidance. If it fails, they told you so.

Disclaimer: this is not what I'm a doctor of. However, I do work with mechanical engineers and their advisories of "stay within these guidelines if you don't want to break anything" are serious and well-grounded. I tend to respect their expertise.

EDIT 31 July 2015: Coincidentally, I saw a set-up very similar to the one pictured above yesterday. It was at the top of one of our local bridges where the winds were modest (no whitecaps on the waves below) and the speeds were about 50 mph.

Unfortunately, the kayak and the vertical piece were lying in the middle of the road. The crossbeams and the lengthwise rails were lying in the other lane. This lead to much creative use of language as I tried to maneuver around the road debris while in rush-hour traffic.

So, I stand by my original statement: it's not safe. I have a little more knowledge about the failure modes, though: they're incredibly annoying with a distinct tinge of "very dangerous."

Regardless of weight, the advisory height limit of 50 cm will likely be violated if the plan is to carry the two kayaks on their sides.

I'd advise against doing so for this reason alone.

I regularly used to drive a Vauxhall Agila of the same age with large loads on the roof (bikes, roof boxes, long lengths of wood/plumbing/ladders, small boats, a big TV, and even a bath). My biggest concern was always the stability of the car, It is really light and tall, so too much on the roof lifts the centre of gravity high up. Couple this with cross-winds and driving it becomes an 'exciting' to say the least.

I don't think it's necessary to go into specifics. Just generally speaking you can already determine that it is not a good idea.

These things are tested to breaking point and then a large safety margin is applied. By overloading the rack by 30% while driving at the fastest speeds it will have been tested at you are eating up a large portion of the safety margin and straying dangerously into the meaty portion of the bell curve.

Personally, I would try it.

Assuming there was a built in safety factor, I loaded 100 lbs of mountain bike/rack onto the 75 lb limited factory roof rails/cross bars on an '04 Toyota RAV4, and other than a little bit of flexing in the cross bars, there were zero issues after an hour of 70+ mph highway cruising.

Just to make sure, I would strap them on and go for a test run up to 30 mph. After that, pull over and check everything is still tight, then try 40, wash rinse and repeat at 50, 60 mph. Also check relatively hard braking and side loading that you may encounter in an emergency situation.

I would of course advise you to find an empty parking lot to try this, just in case your little boats turn into little planes. Obviously you are assuming some risk of damage, but you already knew that when you asked the question.

Not the answer you're looking for? Browse other questions tagged safety opel weight agila or ask your own question.

6
Is it safe to dig a trench under a car to work on it?
2
Exposed tire wire- safe to drive home?
7
Should I pull up the handbrake as high as it will go when parked?
5
What are the implications of driving through flood water when I have a high air intake?
4
Can I retrofit heated side mirrors if it wasn't an option with the car?
68
Are classic cars safe?
1
What part of a car makes it tilt to the inside of a turn?
5
Is my working area safe?
5
Safe working technique; four axle stands
2
How does towing small trailer vs carrying multiple passengers affect the car?