What is a stress riser?

What is a stress riser and why is it important to avoid them during engine construction or rebuild?

A stress riser (also known as a stress concentration or stress raiser) is so called because there is more stress in one area which can cause fatigue cracks and ultimately cause part failure. This can happen in any part in the engine, but some parts are more prone to stress than others, so would suffer sooner.

A stress riser can occur anywhere stress is concentrated. This normally happens where sharp edges are present. Normally, the rounder the object, the better the stress is distributed across the entire object.

Any part in the engine must be able to withstand the stresses which are put against it. When it doesn’t withstand the stress, it fails. This failure doesn’t usually occur all at once (under huge stress it could, but we’ll not go down that road), but usually gradually over time until the part can no longer support the load and ultimately fails. Every load bearing member has to provide resistance to a load. When this load is applied, there is an elastic deformation which occurs in the material. There is no such thing as a perfectly stiff or absolutely rigid structure (read: immovable object/irresistible force). In order for the object to support a load, it has to be able to deform in some way or another. Think of a wooden deck you have attached to the rear of your house. As you step on a board, it supports the load, but it does bend somewhat in the process. This deformation is what we are talking about.

Stress risers always occur on the outside of an object. The reason is because this is where the maximum stress is located. The place of maximum stress (or where the stress riser is at) is the place at which cracks begin to form. There are two ways to stop or impede the progress of a crack formed at a stress riser. The first is by the reduction (or elimination) of the load, which usually happens as the load cycles. The second is in the structure of the metal itself. As the crystalline lattice is disturbed at the leading edge of the crack, progress is blocked. The problem is, once a crack has formed and is stopped by either the cycling of the load or the lattice crystalline structure, the cross section of the part has been reduced. Even if the next load cycle is the same as the previous load cycle, since the cross section is reduced, the stress is increased at this point. The crack becomes a stress concentrator. As more load cycles occur, the crack will be elongated due to the stress concentration and because the crack itself will be jagged, which also helps promulgate the stress. As the load stress cycles and is released, it progresses as “crack, pause, crack, pause, etc.” until the part completely fails. 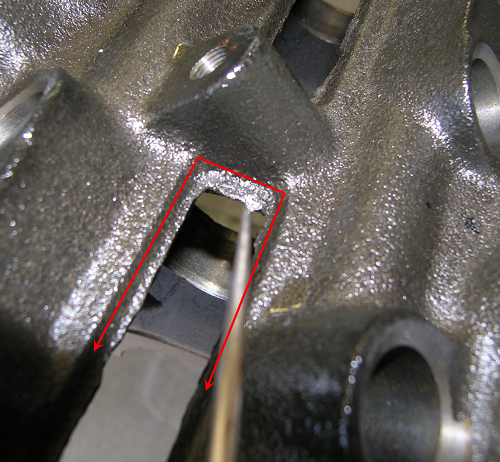 The inside the red lines is casting flash. If you’ve ever rebuilt an engine, you know how sharp these areas can be. This is the lifter valley of a V8 engine. Casting flash can occur (as I stated) any place where two parts of a casting mold come together. Another place to look for casting flash is on connecting rods. In the following picture, the top rod is stock in appearance and the bottom has had the casting flash removed. 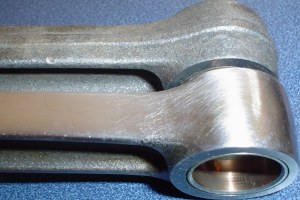 You may look at the top rod and ask yourself, “This area does not look sharp. Why should I worry about that?”. The answer to your question is, the raised section, while not being sharp in feel, still provides a more pronounced area for a stress riser to occur. This area concentrates the stress. The bottom rod, after being cleaned up, actually will be structurally sounder because the stress has a lot less of a chance of concentrating and thus lessens the chance of stress risers. This process also makes the rod lighter, which means less mass being flung around. When doing this, you need to ensure the rods and pistons are balanced to ensure there aren’t any issues.

When rebuilding an engine, it is very good to go through the entire engine and remove all of the sharp edges you can. You can do this with a roll sanding tool. 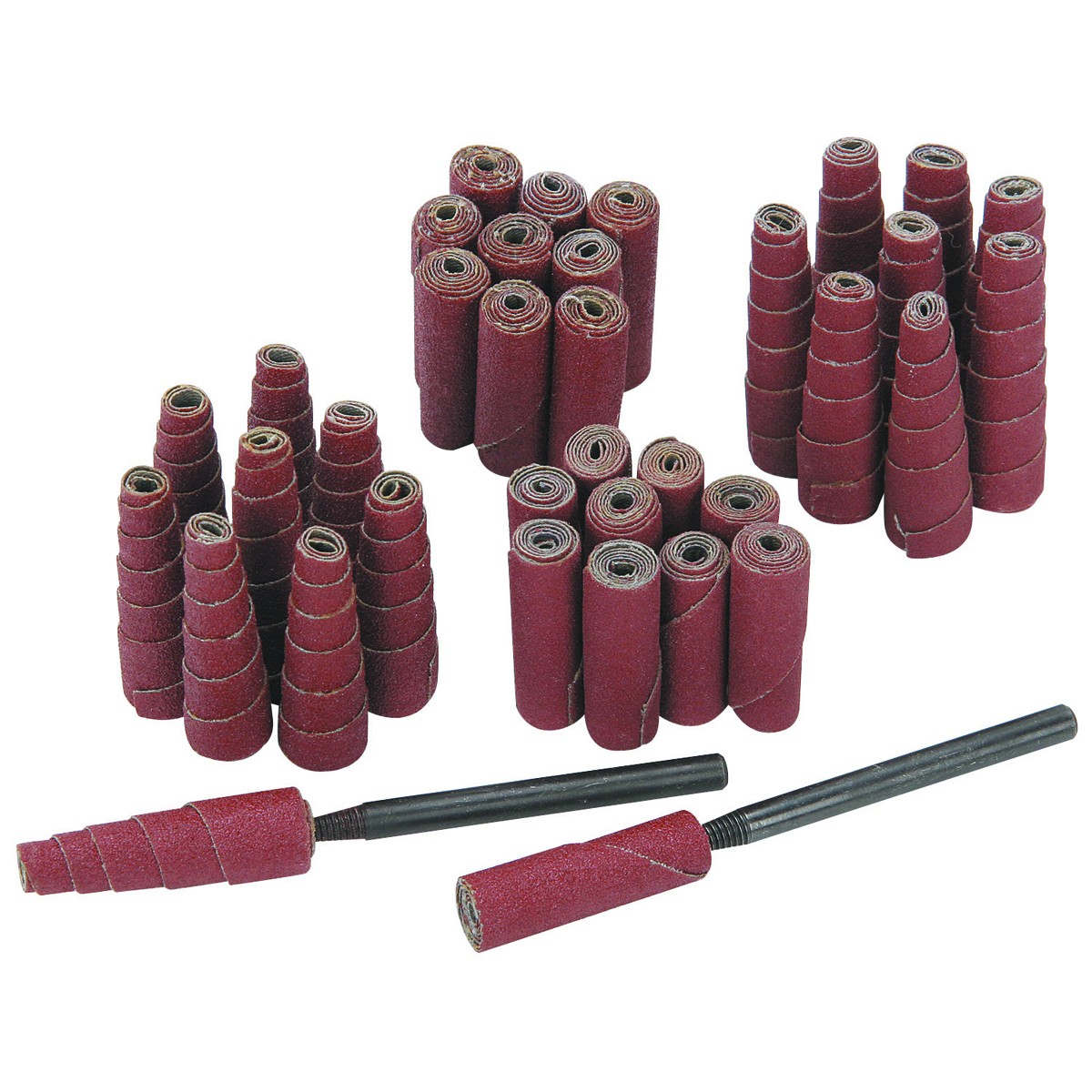 These sanding rolls will quickly remove casting flash and smooth things up for you. You may need quite a few of them to through an entire block. Also, you can remove the sharp edges which have happened if you get your block decked, as the edges in these areas become sharp as well. Ensure you do not get over zealous and cause problems on your machined surfaces, though. Just be careful and take your time. You want it done right, which takes a bit of time to accomplish.

There is a lot more to be told about metallurgy and the like, but I believe that is best left for a different question.

16
What is crankshaft grinding and why is it done?
3
How does a 'very small stone' hit on the windscreen creates long cracks coming out of it?
5
My Lexus RX 350 back window shattered. Is this possible by weather or only a person?
3
Long crack in windshield: What could have been the cause and what can I do?
6
Is this windshield crack definitely caused by impact?
4
Why is lugging hard on connecting rods?
5
Rebuild for longevity
3
Should I be concerned about these cracks on the giubo?
2
Dispute with insurance over broken tooth in power steering drive - do I have a case?
0
Snapped brake caliper bolts - were they damaged before I removed them? (And why?)
See more linked questions

3
Hyper-miling and stress on engine oil
30
what is difference between DOHC and SOHC?
4
Effects and factors of wheelbase in the design of a motor vehicle
4
Why is Diesel Engine called as Quality Controlled and Petrol called as Quantity Control
1
Had major overheat issue but engine was rebuilt 3 months ago
29
5-Stroke Engines - What are these things?
9
What exactly is a head gasket?
4
What is meant by bore and stroke?
1
Radiator cap pressure and how it impacts stress on cooling-system and engine?