My son was cutting the grass the other day and stopped. After he stopped the lawn mower wouldn't go into gear. 1-6 or reverse, nothing. The blade still engages and turns however it seems to have an issue disengaging, but minor and still worked.

The belts appear to be on the pulleys and the shifter is moving the entire mechanism down to the transmission (however I can't see past the arm on the left side). Also the lawn mower moves freely (I can push it) in any gear where before I had to put it in neutral to push it. What are the next steps of troubleshooting this?

Addition: The drive pulley is moving obviously because the blade engages. But I did notice that the drive belt is pretty loose. When I pull on the drive belt and the engine is on and in gear it starts to slightly move. It seems that the gear mechanism should be moving the belt tighter but it doesn't seem to be doing anything when I look at it. [So when I put it into 1st gear on my right side the gear mechanism pushes the bar and clutch mechanism on the left rear axle but this seems to do nothing and the belt is just sitting there slightly loose. I am not sure if the belt is stretched too much or if there is something that is supposed to pull on the belt or a pulley or what.

Another update: Clutch idler is working fine. Also I put some gloves on and pulled on the drive belt while it was in gear (I do not recommend this to others). The belt is just really really loose but still on all of the pulley and functions perfect fine when I put enough force on it. How did my belt get this loose? Is this indicative of anything else wrong? Is there any way to fix this without getting a new belt? Any else I should look at?

It sounds to me as though the clutching idler pulley is not releasing. If you get a look under the left hand side (as you are sitting on it), you should be able to see both belts riding off of the engine pulleys. If you have your son actuate the clutch while you are looking at it, you should see the clutching pulley move. These are nothing more than a slip clutch, where when the belt does not have tension, it doesn't grip; when it does have it, the mower goes. Your clutch linkage may be disconnected or broke. 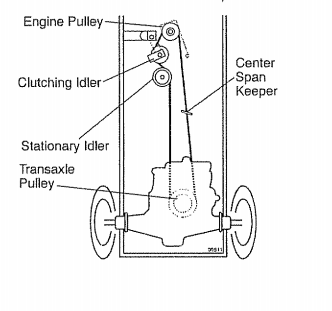 Not the answer you're looking for? Browse other questions tagged clutch lawnmower or ask your own question.