What exactly is a "burnt valve" and what causes it?

I've come across this term a couple of times in the context of diagnosing engine-related issues, but don't know what it refers to. Here is an example from an automotive forum I frequent:

I gotta say it's not likely to be a burnt valve. These engines seem to be mechanically pretty bulletproof.

So what does a burnt valve refer to and what could cause it?

Valves can bend, break and/or burn. If the valves don't provide a complete seal, for whatever reason, the hot gases are forced past the valve which eat away or burn away the edge of the valve due to concentration of heat and pressure. 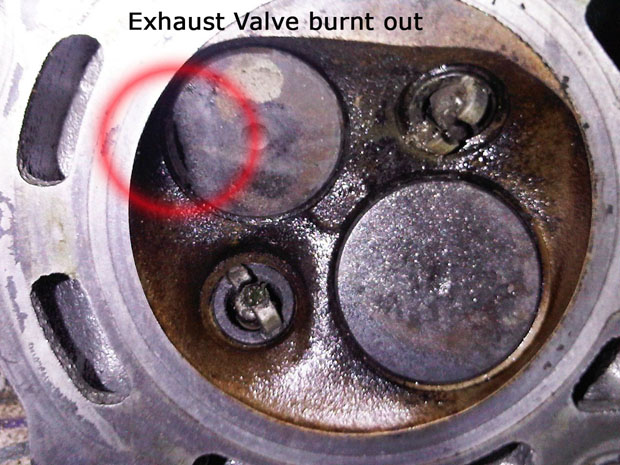 Causes that I can think of -

ADDITION
This is only expanding on the above mentioned points. Mostly cause I can't think of any more

A burnt valve can happen for one of many reasons, but the underlying issue is, the valve is not sealing correctly and allows hot engine gases during the combustion phase to leak past the seal which is formed by the valve and seat. When the seal is lost, the hot exhaust gases escape past the valve (can happen to either the intake or the exhaust valve, but is much more common on the exhaust) and wreak havoc. The burnt valve is usually not the cause of the issue, but more so the outcome of a different issue.

A normal running 4-stroke engine has valves which allow for the incoming air/fuel mixture into the cylinder (or just air on direct injected engines) and for the outgoing exhaust fumes to escape out the tail pipe. Valves in and of themselves could not stand up to the extreme environment of the combustion process. When a valve closes and is sealed against the seat (which is embedded into the head), one of the salvation factors for the valve is heat transference. The head absorbs some of the heat which is collected by the valves. This heat is then transferred out to the coolant system, which takes it away from the area and allows things to run as we consider normal. If a valve, for whatever reason, is not allowed to close completely, a leak in both air/fuel during the compression cycle and exhaust during the combustion cycle occurs. This causes several different problems within the engine:

A valve can get into non-sealing state for several reasons. These might include, but aren't limited to:

Any one of these can cause a valve to stay open during the combustion event, which allows very hot gases to escape past the valve. Since it is not allowed to fully seat, there is nowhere for the excess heat to go. It stays at the valve head and damage soon occurs.

When there is no sufficient cooling in the engine it may cause the seal of the valves to give way(exhaust valve generally), gradually over the course of time the exhaust gases escape even without the valve being fully open thus increasing the risk of further damage. A partially burnt valve will be difficult to notice but will produce anomalies in the fuel economy.

Not the answer you're looking for? Browse other questions tagged engine engine-theory valve terminology or ask your own question.

9
Making a custom exhaust
1
Will a hole in flex pipe or exhaust cause burned valves?