How much fuel does it take to start an engine?

I appreciate this is a question that can't be answered in facts and figures, so I'm after a general idea. I drive a 1986 Supra, which has a modest 2.8-litre engine. I often shut the engine off while waiting at traffic lights to save fuel, but I'm wondering how much it saves when I have to crank the engine before pulling away.
Somewhere along the line, I heard that it took about 30 seconds of idling worth of fuel to start a cold engine (i.e. the same amount of fuel as the engine would burn idling for 30 seconds), and for a hot engine, that drops to around 10 seconds, so I try to shut the engine off if I'm going to be waiting for more than 10 seconds.
I'm wondering if this "rule" only applies to more modern cars, which is why I mention the age of my Supra. Obviously all EFI engines "flare" after being started with the key to ensure the engine catches; if more sophisticated fuel injection systems have finer control over the extra fuel used during the flare, they might use less fuel to start.
The perfect situation is waiting facing downhill where I can let the car roll, then bump-start it using its own momentum instead of the electric starter (since it doesn't flare), but those are few and far between.

This question is very multi faceted because fuel economy is such a complex topic. When a car is starting first the computer check the coolant temperature sensor to see how hot the engine is. In the memory of the computer there is a look up table that dictates how much fuel it should add for a specific temperature. This table is very conservative and the computer will add more fuel than is actually needed just to make sure the engine starts. Then the computer will set the idle speed motor to the max value as per look up table as well this is why that flare up happens. Whey you start cranking the engine the computer starts adding fuel and spark, but it will take at least 3 to four revolutions before something happens and then at least a half second for everything to stabilize. A this point the computer takes control of the idle and brings the flare down. Finally, this is the point that is often forgotten, the computer has to bring the engine under closed loop control. In closed loop control the engine is most efficient as compared to open loop control that uses a similar table mentioned up above. The biggest obstacle to getting under closed loop control is the temperature of the oxygen sensor. If it is too cool it will not read and will start reading when it is sufficiently warm. Most vehicles are equipped with oxygen sensor warmers. With the age of your car i'm not sure if it has one and that would cause it to take longer to warm up.

With all of this being said i'm not sure how much fuel you are actually saving. The extra fuel needed to start the car and to bring it under closed loop control may actually waste more fuel then just idling for that 30 seconds. Also your starter and ignition switch both have a rated life, an average number of times that they can preform their job. That amount may be 1000 times or 10000 times but turning the car on and off like you are is greatly increasing the rate at witch you will reach failure. Ultimately the extra wear you put on your engine components may out weigh the fuel savings that you might be getting.

If your driving is consistent, you could test it out by measuring your gas mileage, with shutting your vehicle off at lights, and not shutting it off. You would want to average at least 3 tanks of each to make sure there aren't any weird outliers (stuck in traffic, muggy weather).

If you want an exact answer for your vehicle, you would need some way to measure the amount of fuel passed into the engine. If you have datalogging access to your ECU, you might be able to calculate fuel consumption based off of injector pulses.

1.1ml of petrol per engine restart

For fuel injected engines, this paper suggests for a 1.5 litre engine it takes 1.1ml to 1.2ml of fuel to start a car. In another study, the graph below (link) suggests the amount of fuel used when idling is, in relation to engine size, linear - the bigger the engine the more fuel.

So, when idling a 3 litre engine you will use twice as much fuel as a 1.5 litre engine (0.6 litres per hour) and I would expect this difference to be the same when starting a car because the amount of fuel used starting a car, like idling, is dependent on engine size.

The 1.1ml of fuel study is an old study (2002?) and, with improvements in computerisation and sensors in fuel injected engines, I would assume the amount of fuel required is now less. The all important mixture of air and fuel can be optimised automatically.

25 year old carburetor based engines are different to fuel injected

With fuel injector engines, how cold the car is won't have much to do with how much fuel it will use to start up. With carboretor engines (entirely phased out in cars by the early 1990s), it will be more expensive in fuel and depend on the warmth of the engine, the use of the choke an other factors.

1 - 3 seconds of idling is equal to one restart

I've heard reliable sources for modern fuel injected cars quote somewhere between 1 and 3 seconds of idling equates to one restart of an engine.

Don't let your car idle; to warm the engine drive it carefully

The information you heard about the difference between idling and starting up is not true for fuel injected cars - all new cars made since the 1990s. This information may be true for very old carburetor based engines. You are better to drive your car carefully as soon as you start your engine up (don't floor it and don't let the car idle to warm up; you can start and stop your car as much as you like...the total cost in starting a fuel injected engine will be less than the total cost of idling). 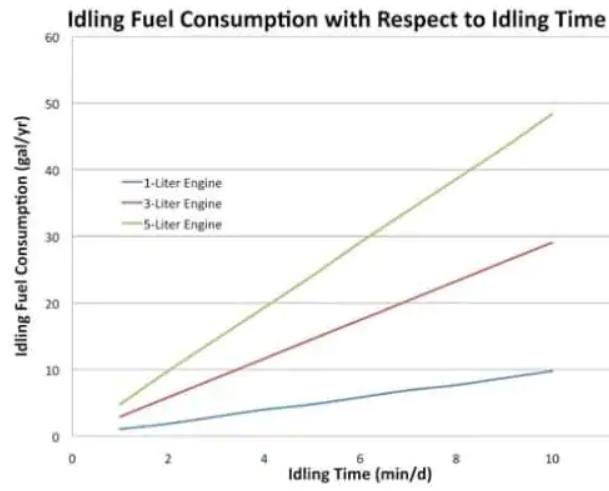 Not the answer you're looking for? Browse other questions tagged engine starting fuel-consumption fuel-injection or ask your own question.

15
How much does spark plug gap affect fuel efficiency?
5
Automatic: revs dropping then stalling when stopped at lights
6
Is manual start/stop good on older cars?
8
For how long should I idle at a stop?
5
Cranks, but slow to catch. Dies after starting
1
Could air bubble in coolant cause longer cranking only at warm start?
1
Fuel was chocking while entering into the carburetor
0
how much does it cost to turn off the ignition to save gas?