What are the Advantages of a Single Side SwingArm on Motorcycles?

I have noticed that Ducatis , Honda and Triumph have bikes with a Single Sided SwingArm Much like most of the scooters.

Are there any advantages of following this design , if so why are not all manufacturers using it.

Why are all the scooters using a SSSA ?

I have not seen any scooter without a SSSA.

The information provided by DucatiKiller is excellent.

I believe the biggest advantage is access, which makes wheel changes and maintenance arguably easier. This could also translate to pit-lane advantage in racing situations.

Particular case - in the case with Ninja H2R -

Having a single-sided swingarm allows the exhaust pipe to be mounted closer to the bike’s centerline, providing a high bank angle for sporty cornering.

Disclaimer - I actually have zilch experience about what I'm talking about-Fact.

While the point on SSSA being lighter sounds plausible, and it maybe true for certain case by case comparisons I'm not sure if that can be actually generalized.

Why manufacturers go with a particular design in this case boils down to design decision which may even include aesthetics apart from engineering considerations.
Again, I'm not sure of any of the above.

While various items such as maintenance and ease of tire removal are cited for the SSSA (Single Sided Swing Arm) design, initial testing and development of all these designs were started on the racetrack. Honda initially released their version of the SSSA with NSR250R. 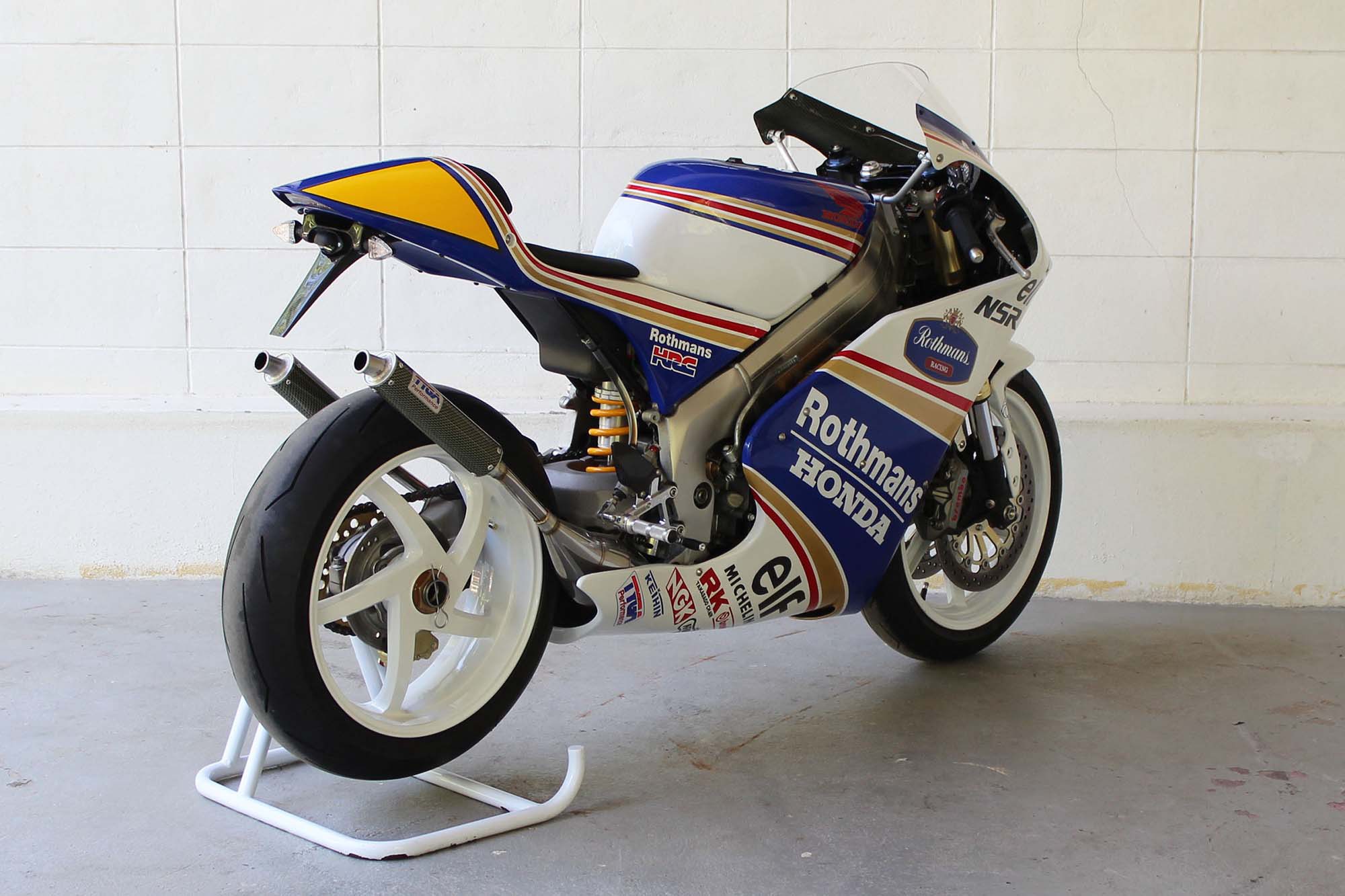 All of the early SSSA's were developed for racing to reduce un-sprung weight. From there, street sport bikes were the early adopters, porting the race technology to the consumer. This was followed by SSSA's on scooters and other non-sporting motorcycles.

While there is logic regarding reduced maintenance and ease of maintenance regarding SSSA's their initial adoption was for reduced weight and racing applications.

With all vehicles, un-sprung weight is the holy grail of handling. Un-sprung weight reductions result in a wheel getting back to the surface area it's adhering to in less time. The result is frequently less over-steer in cars and in motorcycles, less low sides due to interruptions in friction adhesion to the road surface.

Un-sprung weight or un-sprung mass is the weight that is not carried on the spring in your suspension. If it's below your spring it falls under this category. For bikes; the rims, tires, rotors, brakes, lower fork legs and swingarm all fall under the category of un-sprung mass.

The lighter this mass, the more responsive it can be to outside forces, responding as needed by absorbing energy, responding to undulations in the surface by not bouncing off the undulation and getting back to the surface of the road with it's full weight as quickly as possible.

To summarize the advantages:

Why don't all manufacturers do it?

This is subjective, I believe it comes down to cost. If it were cheaper and there were performance advantages then I would imagine that everyone would engage in this design as a framework moving forward. It would seem there is a higher cost as only the higher end motorcycles like Triumph and Ducati are implementing.

The flip side is that due to lightweight materials and construction other manufacturers have found a weight/rigidity balance in there designs that allows them to be both competitive in the showroom as well as the racetrack.

Again, this is subjective and opinion based.

Here is an example diagram of Honda Ruckus that does not include the rear brake mechanisms within the unit.

Due to the rigidity of the unit it only makes sense to make it all inclusive in a single sided swingarm. The unit provides multiple options for the various components as well as ease of maintenance for mechanics.

Additional benefits include ease of rear tire change for an end user that may not have the technical ability to line up a rear wheel properly with a traditional swingarm making for less service related mishaps and longevity of the vehicle.

Although car related, this kid has some excellent videos, a little long winded but very good information regarding suspension and the importance of a low unsprung mass in any vehicle. Have a look here.

Many manufacturers use a vacuum casting method to create thin walled high strength components. This a good video that illustrates the benefits.

As a 35 year veteran motorcycle rider and owner of 15 different bikes during that time, while I don't dispute the unsprung weight argument made by DucatiKiller, I can tell you that there is a much, much, much more practical reason for using a single sided swing arm: It dramatically simplifies chain maintenance. You see, with a double sided swing arm, you must ensure proper rear wheel alignment with EVERY chain adjustment. The rear axel must be kept perpendicular to the swing arm. Getting chain slack adjusted is a fussy process, often requiring multiple cycles of loosening everything, making the adjustment to chain tension, and then tightening everything up again, measuring the new chain slack, and then (more often then not), repeating this. In addition, as the chain and sprockets wear out, the chain has loose and tight spots which can cause confusion with rear wheel alignment, as a tight spot on the newly adjusted chain can easily be a symptom of misalignment, (i.e., adjusting each side of the swinger's adjusters unevenly). And, if you misalign the rear axel you can cause the chain to become stressed and stretched, in addition to other problems. The single sided swing arm does away with all of that. The rear axel cannot become misaligned during routine chain maintenance, because it's alignment is permanently fixed relative to the single sided swing arm. Other maintenance benefits include easier rear wheel removal, tire pressure maintenance, and access to cleaning and inspecting everything in and around that area. Many manufacturers sell shaft drive motorcycles - not because shaft drive is more efficient than chain drive, (it is not), but because motorcycle owners are notoriously bad at keeping their chains adjusted properly, a problem that has always been made worse by the double sided swing arm.

Not the answer you're looking for? Browse other questions tagged motorcycle suspension scooter swingarm ducati or ask your own question.

11
What are the advantages of upside down forks?

4
Scooter won't start
2
Yamaha XJ750 not starting
11
What are the advantages of upside down forks?
10
Motorcycle exhaust rattling / clunking / popping / burbling on deceleration
8
What can cause my motorcycle to shift into gear (but not all of them) without using the clutch?
14
How to Remove Stripped Hex Bolts
5
Combining two single cylinder engine using chain in the crankshaft - Is it Reliable?
2
Motorcycle: Annoying brake disc rubbing. Can't understand why
1
Using li-ion battery on motorcycle with existing minimum current draw