While replacing my calipers and their mounting brackets, I passed a tap through the bolt holes on the wheel hub assembly that secure the bracket, to clean up the threads. The tap's movement felt unusual: it didn't seem to be hitting any thread once past a certain point in the hole (which is about 3/4" deep in total).

I took a closer look, and found that there doesn't appear to be any thread in approximately the second half of the bolt hole. There might be the remains of some; it's hard to tell: 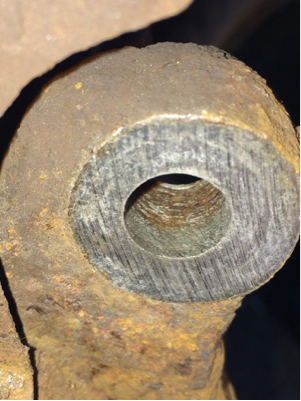 The bolt starts on the inside of the car; the picture is taken from the outside -- the back of the hole where the thread seems to be missing.

The bolt seems to hold its position just fine. I had the bracket off a few months ago, as well as sometime last year, and I'm always careful to torque things down to their specifications. I didn't check the torque when pulling it off, of course, but it required force to loosen that was definitely in the right ballpark.

Both holes have the same appearance, which makes me think it's more unlikely that this is abnormal. The other wheel is about the same; there might be a little more thread. Hard to tell. Is this how the threads are supposed to be, or do I need to plan on replacing the hub assembly?

(I can't see enlargement and retapping of the hole as a solution, because I don't think there's enough surrounding material on the bracket itself.)

Well, this was me being an idiot. Or, more charitably, not thinking the situation through.

When I got around to reassembly, I realized that this hub assembly is between the head of the bolt and the support bracket, and it's the bracket itself that has the threaded hole. This bolt hole felt so loose because there aren't threads; it's drilled to the full outer diameter of the bolt (12mm in this case). The bolt slides right through here, and is secured by the bracket on the other side, with a lock washer under the bolt head.

Whatever threads appear to be in this hole are either illusory or the result of corrosion; they have no role in securing the bolt and can be ignored.

From the look of the picture I would say that there is not much 'meat' left for the threads of the bolt to grab against. The amount of corrosion leads me to believe there were threads all the way through at some point.

Drilling/tapping can get complicated and expensive if you don't have the tap. Also the bigger bolt may not fit through the caliper.

Correct Answer - Considering this is related to the brakes and not just some unimportant plastic shield, I would recommend replacing the wheel hub altogether. A junkyard or Internet search should turn one up for a decent price.

Alternate, Possibly less safe answer - If space allows; drill out the rest of the threads from the current hole. Use a longer bolt of the same diameter and secure it with a nut on the backside of the bracket. High grade hardware and a lock-washer should be used.

If the bolt will bite and you can torque it to spec, I don't think you have an issue, per se. That said, if it were me, I'd go through the process of tapping the hole and setting a Helicoil in its place, just to ensure I have clean threads to work with. There is plenty of meat around the bolt hole to accomplish this. Since this is a braking associated part, it's not something I would leave unattended. Helicoil kits have the tap and insert to accomplish this with minimal fuss. You'd just need to figure out the pitch and thread of the hole to get the correct kit.

Not the answer you're looking for? Browse other questions tagged brakes subaru forester fastener or ask your own question.

1
2013 Subaru WRX - Stripped exhaust bolt
2
Bolt reaches end of hole but threads don't grip
10
Sounds like brake disc is making contact with pad shims
12
What size hole should be drilled for an individual tap?
6
Could one smaller tire on back be the cause for the rear wheel bearing to go out on a subaru outback?
3
2008 Subaru Outback (Base) EJ253 4EAT - Wheel Hub Assembly Questions
1
Car pulling to left, gets worse when braking, often better when accelerating (especially when warm)
1
How to remove broken bolt stubs from brake caliper bracket?
3
Are these unmarked bolts OK for brake calipers?