Do the front wheels turn a little bit on potholes and bumps?

I just replaced the inner and outer tie rods on a vehicle, and some time later was thinking about the linkage.

I don't recall if the inner ball joint was at the same location as the inner suspension link, but even if it is when steering straight, in a turn in wouldn't be.

This means that if the wheel moves up or down, the tie rod will pull or push the wheel a little bit.

Is this correct? If so, is the effect just so small it doesn't matter, or is there some other aspect of the steering/suspension design that accounts for this movement?

suspension steering ball-joint
Share
Improve this question
asked May 26, 2015 at 14:49

The movement of the steering as you hit a bump is called bump steer, but this has nothing to do with what the beginning of your question is about.

As you turn the wheel (you turning it, not bump steer), the geometry of the steering components are such that the inner tire (which ever it may be) will turn tighter than the outer wheel. It is this way because each of these tires are on a different arc and therefore travel a different distance. If this didn't happen, the front end of the vehicle would buck and yaw as you'd go around the corner.

Bump steer is a different equation. Bump steer occurs as the front wheel (could be the back on an independent suspension, but to a much lesser extent) moves up and down when it encounters a bump in the road. Take a look at this PowerPoint mockup: 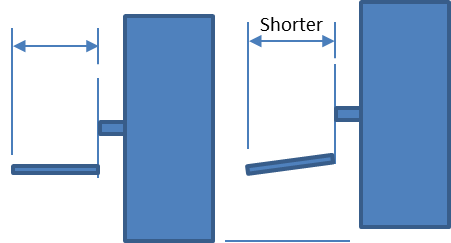 As the tire articulates up or down, the tie rod length is effectively shortened, which causes the wheel to toe in if the steering mechanism is in front, or toe out if to the rear of the tire. Toe in/out refers to which way the tire is pointing (think of looking at your shoes to see if you are pigeon toed or not ... pigeon toed would be considered toe in. For drive ability's sake, this is how all street cars are normally run). It mainly becomes apparent when a single wheel hits a bump rather than when both do, because when both hit a bump, both sides are affected in the same manner.

Every vehicle with independent front suspension is affected by bump steer to some degree. According to the Wiki article linked above, typical values are from two to ten degrees per meter of tire travel, for the front wheels. For most vehicles, that's not a lot of bump steer. Typical travel of modern vehicle suspension is probably around ~7-8" from the vehicle resting on the ground to fully extended and less than that from resting to fully compressed (more like ~4-5"). That is not a lot of movement from this effect.

Some vehicles have a much larger issue with this than others. Mainly jacked up 4x4s suffer the most. That is if they don't do something with the steering linkages to fix the issue. There are two things which primarily affect this. First, the more parallel the tie rod is to the ground, the less you'll see bump steer. Second, the greater the wheel travel from fully extended to fully compressed, the greater you'll see bump steer. You can reduce this effect by lengthening the tie rod pivot length. Limit these two factors and the problem is reduced.

Not the answer you're looking for? Browse other questions tagged suspension steering ball-joint or ask your own question.