I've got a '99 Pegaso 650 which hasn't been running for about 7 years. It's was in a quite a deteriorated state when I got it, i.e. seized carbs, tank full of water, sump full of an ugly fuel/oil mix, I seriously I drained about 5 liters from it.

I've fixed the biggies and finally got it started today, however it's running really rough (no surprises there) but what worries me is the way the headers are glowing. I've been riding for a long time and owned more than a couple of bikes, but I've never seen headers glow like this before.

A quick search of the internet shows number of threads similar to this, the responses vary from 'this is normal noob' to 'tweak the pilot jet to make it run richer'.

What's your opinion, the bike is a 650cc single bore, it runs very rough for about 3 minutes, the temperature gauge shows about 80 C, but exhausts start to glow.

I would say, no, it's not normal under 99% of circumstances and the remaining 1% most likely won't apply (no turbo to get heat soak from, for example).

The clue is probably in it running rough - did you clean/overhaul the carb(s)? If not, chances are that the mixture is way too lean because some passages in the carb are blocked. I'd try to open up the carb, check for deposit and clean it out with a good carb cleaner. If that improves matters but it's not quite there yet, I'd get the carb ultrasonically cleaned.

The other potential issue that might contribute to the exhaust getting this hot is that the timing is off - check that as well.

I have typically replaced my stock exhaust systems with aftermarket race systems.

Many stock exhaust systems have dual-wall designs so you never see the pipe that the exhaust is actually flowing into.

All of my exhaust pipes glow orange/red when I ride them hard. It's fine and completely normal.

Here's a bonus video of a cars exhaust glowing red. 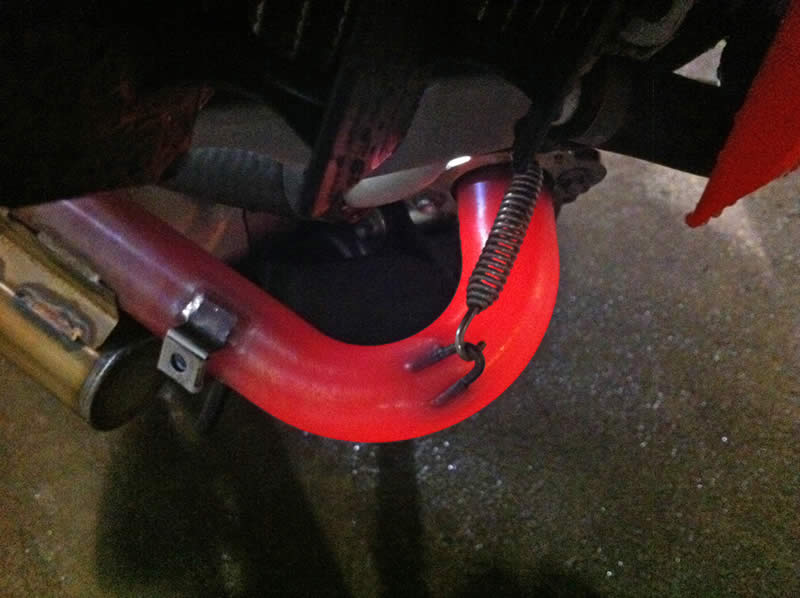 Not the answer you're looking for? Browse other questions tagged motorcycle exhaust or ask your own question.

3
How should I diagnose an exhaust "howl" when descending through 3200 rpms?
5
Aprillia Pegaso 650 won't start after cleaning carbs, what might be wrong?
5
should I replace gaskets when replacing exhaust?
4
How hot does an exhaust manifold get?
5
Is it safe to store my FZ6R in a hot garage that an air conditioning unit emits exhaust into?
9
What effect will replacing manifolds with headers have on oil temperature?
1
Should I be concerned about rusty exhaust pipe on used car?