What would be the most likely cause of engine sputter?

This always happens within the first 100 yards after starting the car, and it runs fine after that. It is not throwing any error codes, so if it's misfiring it's not reporting it.

What would be the likely cause of this behavior?

It only seems to happen after a cold start (car has been sitting for > 4 hours). The outside temperature does not seem to be a factor, it has happened in winter (0F-20F) and summer (70F-90F).

Spark plugs were changed about 3-4 years ago, but I will be changing them today.

Fuel filter might be original, or at least has not been changed in the 6 years I've owned the car. I am thinking of changing this too, but it is a pain in the ass to get to since it's in the tank.

Replaced spark plugs. The car seems to be running better, and have not yet experienced the reported issue (though it was very random, so it may be to early to call it fixed).

Spark plugs did not solve the problem.

The vehicle is also idling very low (200-300 RPM) once it's warmed up, and occasionally stalls while idling.

Just had the car to the dealer for a software update, turns out there was a service bulletin that mentioned this type of issue. The car seems to be running better, idling normally, and less hesitation when accelerating from idle.

Crushing the car and purchasing a new one, seems to have fixed the problem. 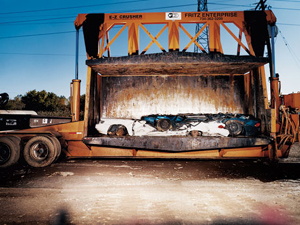 this sounds just like a clogged fuel filter to me.

The car starts fine because the fuel has had time to percolate through the clogged filter but once that fuel is used up the engine starts starving for fuel because the flow through the filter is not great enough to run normally.

Since it occurs randomly it will be hard to test this. But I would try slightly depressing the gas immediately when the car starts and see if you get the engine stuttering. I believe with the gas pedal depressed, the fuel line pressure will be greater so that it can push enough gas through the clog to keep running.

Fuel filter. My car had the same problem, no code but the car had cold start problem. It was at the garage for a day, everything checked out good. Out of frustration the macanic changed the fuel filter. That fixed the problem. PS. I didn't know I had to change the fuel filter. I had 90,000 miles on the car, and it was the original fuel filter. My bad.

My 2000 Cr-v was doing the same thing. I ran fuel injector cleaner through it and have not had an issue. (I ran a lot through it. Only had about a half tank of gas and ran a whole bottle, that treats up to 35 gallons)

I dont know but my mothers 99 accord had the same darn thing wrong. i cleaned out her throttle body twice and she runs fine now.. has an internal fuel filter.. so that couldn't be helped.. only thing left for me to do was clean out the throttle body and or replace the egr.. or replace fuel pump.. I went with the throttle body first to avoid spending 100.00 for a fuel pump and almost that for the egr .. she is happy with the results for the past week no issues.. if this problem repeats the next step I will take is the egr from a used car, if that holds for 3 - 6 months we will purchase a new one.. if not the issue we will purchase a fuel pump new.. I have learned it is best to go to the u pull it place and get these costly sensors "used" to validate a problem rather then spend hundreds on new parts..I work too hard for my money to throw it out the window..

Not the answer you're looking for? Browse other questions tagged engine honda civic performance or ask your own question.

5
Stuttering Accord at Stop Lights

5
What would cause a car to lose power a few seconds after starting, then run normally?
31
Spark plug broke off in engine - can I drive the car?
4
Engine misfires when car hasn't been driven for a couple of days
3
Changed spark plugs now engine idles high
2
What would cause those two codes?
1
96 Civic - Car loses acceleration, doesn't start, shuts off
1
Can I interchange the two downstream o2 sensors?
1
Civic 2007 fuel smell when idle