With a lot of Googling I've found loads of different things that could be causing this - and none for a Ford Transit so I hope someone can explain exactly what is causing this problem, and from the mechanical side, what is actually physically happening, (and how the mechanism actually works).

Often when I try to go into first gear, the stick does not go all the way in, and it makes a grinding sound. It seems worse when the van is at a stand still - it goes in far more easily when the van is rolling slightly (a few mph). If I depress and repress the clutch, sometimes it goes in, but can take 3-4 attempts at times. The reverse gear has the same problem, but I have not tried it while rolling forward or backwards, since it's not all that easy!

What part is likely to be needing repair? Perhaps someone can give a link to an example part? For example:

This could be the clutch as you seem to suspect. The effect of the clutch not separating the engine from the gearbox fully is that the input shaft never stops rotating when in neutral. If you have noticed the clutch pedal not releasing as high as before, this is likely. If it's the synchronizer that's bad, moving into second gear and then first should help. (As that will stop the input shaft completely to match the output shaft)

A clutch that does not fully disengage can be caused by different things. If it is a mechanical linkage, it might need adjustment. I think yours is hydraulic though, in that case you might want to check your fluid level and make sure no air is in the system or leaks is apparent in the master or slave cylinder. Bleed it and see if there's a change.

If it's not the hudraulics, it's likely mechanical and you would have to remove the gearbox to fix it. 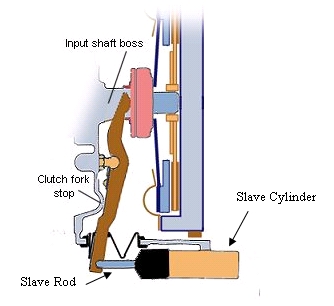 It sounds as though the first gear synchro is or has gone out. This is a part within the transmission. The part allows the gears on both sides of the transmission (drive/driven) to mesh correctly. It is a wear item which is designed to take the abuse instead of the gears.

If fixing this is not in the near future, you can try something which might help get by. When you go to shift into first, try shifting into second, then straight up into first from there (no hesitation after you start your move from second to first). This may help keep things aligned while you are trying to shift and allow the operation to happen without the grind.

The only typical way to get this fixed is by taking it to a qualified transmission shop. They can not only diagnose for sure, but get it fixed if needed.

Not the answer you're looking for? Browse other questions tagged ford clutch gears or ask your own question.

6
Which is it: transmission, clutch, or slave cylinder?
7
Manual transmission difficult to put into gear. Do I need a new clutch?
2
Can a faulty gearbox cause a clutch to wear?
8
What can cause my motorcycle to shift into gear (but not all of them) without using the clutch?
5
Car rattles at low RPM
2
What is the part on older van power windows that typically fails and how do I replace it
0
Dodge Dakota 2001 gets stuck in first or reverse gear, then stalls