The handbrake on my VW Passat Estate B5 has suddenly become slack.

Last time I had some work done on the brakes (replace brake light switch), the handbrake did have a springier feel than before and could be pulled much higher.

I suspect some kind of cam on the wet side of the piston has gone past the point of no return.

You can follow the brake cable back to the rear of the car.

I'm not sure if it goes to the right or left rear.

In so doing you can see if it has any damage. A bad kink in it, torn cable housing (if you can see the actual cable in the housing due to damage....that's not good)

The cable will lead to that. You've probably seen it by now. The arm the cable is typically attached to has a worm screw mechanism to push a caliper piston in when it is actuated. So the transfer of power is through the housing and on the cable to the arm, though the worm screw, through the piston to the pad and against the disc.

At the point where the housing is terminated on the arm there is a clip that can be removed. This will allow you to disconnect the cable. You will want to inspect it and lube it. Ensure the cable moves freely in the housing, if bound, replace it. Lube the cable with a graphite lubricant. 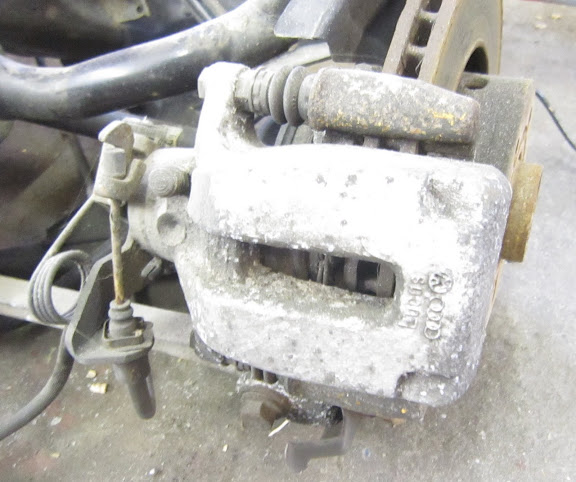 If it's not the cable that's giving you the issue then now your leaning to the caliper mechanism that has an issue.

You would need to remove your wheel and the caliper in order to inspect it and verify that it is operating properly.

If that's your issue in particular you can post a question regarding it specifically. It get's a little too involved breaking down the various things necessary for that.

In the end, this should give you a path to start with.

Parts Explosion of a Similar Caliper

I put this in here to simply give you an idea of what the system looks like. This is not for your car specifically. 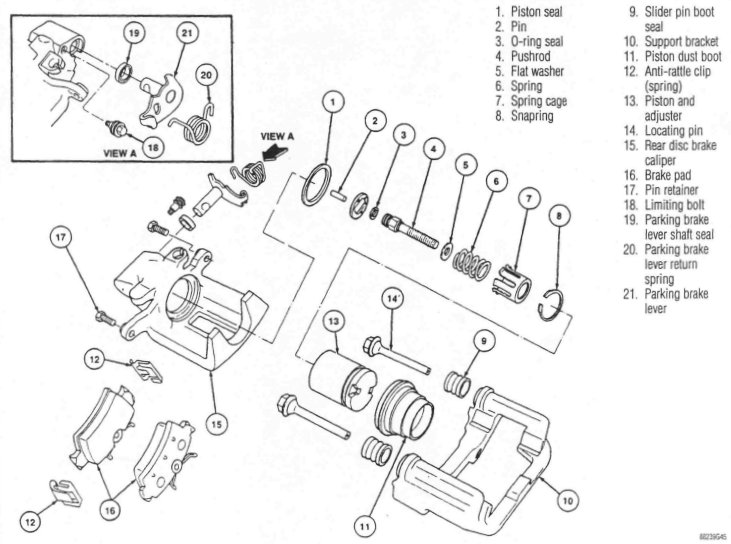 Sounds like the the parking brake mechanism that pushes against the parking brake pads has seized, probably due to wear/corrosion/brakedust. I would take it apart and apply a very thin amount of high temp anti-seize to the joints.

If this is the case you might also feel the brake shudder at certain speeds too because it should be the same as driving around with the parking brake on.

Seems the internal mechanism had failed (The cam inside the caliper, I think).

In my case, I had the caliper replaced by the dealer (they have proven themselves trusted, competent and pragmatic in the past).

Is the cable jacketed? If it is it may be broken inside the jacket.

Not the answer you're looking for? Browse other questions tagged brakes vw handbrake parking-brake passat or ask your own question.

2
Brake pedal will not return after being depressed: brake booster diagnosis?
4
Brake fluid reservoir level drops fast to minimum but not below
2
Parking brake alarm will not stop
5
Front brake caliper mounting bracket out of alignment with rotor
8
Slack in Parking Brake Line
1
My 2008 Mazda 3 TS D passed it's MOT, but with seemingly low service/parking brake efficiency. Should I be worried?
3
Does a failing parking brake cable affect steering and braking?
2
How to gain ebrake slack at the caliper?
6
Hot Rim Looking for Suggestions
0
Why does the rear suspension compress when the e brake is applied, but not when the foot brakes are replied?