Does the size of engine cylinder affect the efficiency?

I mean that, if cylinder have a design in which piston can change its working area alternate. Is there any chance to affect the burning ratio in loss or profit to efficiency?

There is no way (to my knowledge) to affect the displacement of an engine while it's running (dynamically). You can, however, change the two working parameters of an engine dynamically, those being the volumetric efficiency and compression ratio.

Volumetric efficiency (VE) is explained as how well do the cylinders fill with air/fuel mixture during the intake process, expressed as a percentage. A normally aspirated engine, in commercially available passenger cars, will run in the 70-80% VE range. A NASCAR engine can run in the ~105-108% range. The volumetric efficiency will dictate the ultimate amount of power output, but has little to do with how well the engine can convert the air/fuel mixture into power. There are inherent efficiencies when we talk about improving VE, but this has more to do with the fact you can move air better through the engine (air in/exhaust out) which allows you to free up power through the process, but does not make the combustion process work any better.

VE can be changed mainly through the use of super/turbo-charging. By varying the pressure of the intake charge, you are directly affecting VE. Normal air pressure (1 bar) at sea level is said to be ~14psi (or 101.325 kPa). If, during the combustion cycle of an engine, the air pressure inside the cylinder equaled the air pressure outside of the engine, you'd have what is considered 100% VE. If you increase the intake charge to 14psi (14psi above ambient air pressure), you'd in effect double the amount of air going into the cylinder. Theoretically, you should be doubling the power output of the engine at that point. (NOTE: It doesn't quite work out this way, usually because there are engine inefficiencies which create parasitic losses ... for the purpose of this answer, I'll exclude that so as to allow for easier explanation.) By changing the intake charge pressure, you have effectively changed the amount of air/fuel which can be introduced into an engine, and therefor increased the amount of potential power output by doing so. You could look at this as effectively changing the size of the cylinder by making the engine believe it is bigger than it actually is. Does this affect engine efficiency? To a small extent. You do gain efficiencies by utilizing a turbocharger (which utilizes some of the exhaust heat which would otherwise be lost). You also gain some efficiency by having to move less internal engine mass (smaller/fewer pistons, connecting rods, crankshaft, etc.) than you would by doubling the displacement.

The size of a cylinder has less of an effect on the efficiency of an engine than does the compression ratio. This is what I believe you are actually asking about:

"If you had a variable compression ratio, would it effect the efficiency of the engine?"

The above statement is born out in this paper written for the Academy of Mechanical and Aerospace Engineers (AMAE). It states:

To that end, there is an engine designed by Peugeot, named the MCE-5. Wikipedia described it as:

The Peugeot design works by varying the effective length of the con-rods connecting the piston to the crank. When the con-rod is shorter, the compression ratio is lower and vice versa. On the left hand-side of the diagram is the conventional piston of an internal combustion engine. On the right is an hydraulic cylinder with double-acting piston. This acts through a rod-crank system with a gear wheel, whose movement adjusts the effective con-rod length and thus the compression ratio in the left cylinder.

Mechanically, this design seems like a nightmare. Here is a simple stick drawing of what it looks like:

Like I said, complicated. I read an online presentation (use this Google search ... should be the top entry which is a PPT presentation) which described some of the operational parameters as:

The reason for presenting this is to show that there are viable engines which have been designed which would allow for a variable compression ratio (it's not just a pipe dream). I believe, however, that Peugeot scrapped it due to costs.

One of the great benefits of the MCE-5 engine is probably durability. There are far less stresses imposed upon the piston and rings than in a typical fixed CR engine. As shown in these images pulled from the same presentation, there is no side loading, which greatly decreases stress as well as frees up some power which would be considered parasitic loss: 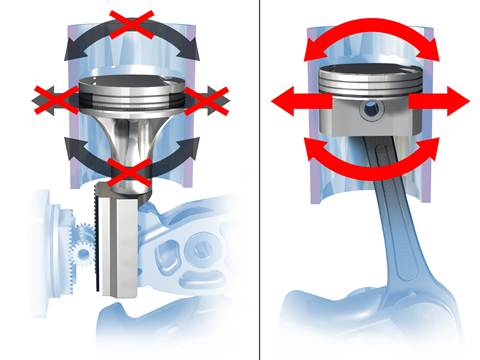 This is because the piston moves straight up and down in the cylinder bore. It would also mean that the cylinder would never become out of round (oval) due to the side loading, either. 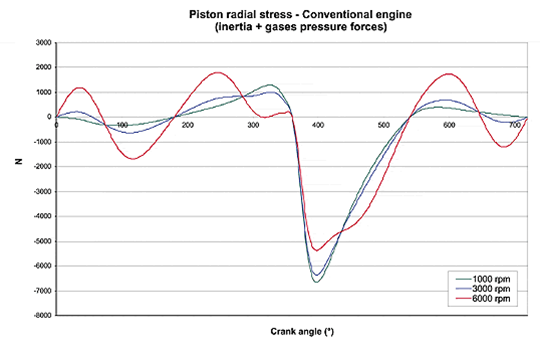 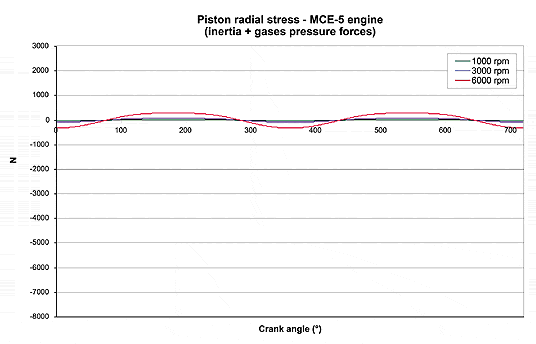 These two charts show the actual differences between the two engine types and the amount of stress which occurs due to the side loading.

I present this really to show that there are other efficiencies with the design of this particular VCR engine. While you may not be creating new horsepower due to the mechanical design, you are freeing up horsepower in the process, which equates to the improved efficiency.

Higher piston surface area generally means higher volume. At higher cylinder volume you'll achieve more torque, which might be useful at acceleration. If you can later decrease the piston/cylinder diameter, you would be running more efficiently as less power is required for cruise speed.

Yes, in the case of petrol engines the optimal cylinder size is around 500 to 550cc. You can test that theory by looking at the total engine capacity divided by the number of cylinders of any performance car, e.g.

If you're interested in dynamic compression ratio's, go read up on variable valve timing.

When it comes to the efficient burning of fuel, it isn't affected by cylinder size or surface area. The efficient burning of fuel is up to the Air/Fuel ratio, Ignition timing, valve timing and engine load. These things are all controlled by the electronic management system or (in older engines) the carburetor and mechanical valve timing. The optimal air/fuel ratio is always 14.7 (for petrol), doesn't matter if it's a 5cc toy car engine, or a 12000cc truck engine.

Things that can change the optimal value from 14.7 to something else are

What happens is that when the car is working harder, you need to inject more fuel than can be burned to help cool down the air/fuel mixture to prevent it from exploding too soon (called knocking). But that's not related to how big the cylinder is, just how much and how fast it is compressing the air/fuel mixture before igniting it.

4
Does Mazda's Skyactiv-G engine avoid EGR altogether?
0
Does using heat in the car SAVE gas?
7
How can head port volume affect the power curve of an engine?
18
Why or why not increase engine efficiency by running the car "fuel-lean" (using a turbo or supercharger)?
5
The Infiniti MCE-5 VC-T - How does it work?
7
How much can sub-optimal octane affect efficiency or power?
5
Combining two single cylinder engine using chain in the crankshaft - Is it Reliable?
2
Atkinson Cycle: Does the efficiency of a high-compression engine come from compression ratio, expansion ratio, or both?
0
Reverse flow head vs Cross flow head