Why are gears designed in this pattern in motorcycles? [duplicate]

Ask Question
Asked 6 years, 10 months ago
Active 6 years, 1 month ago
Viewed 7k times
6
This question already has answers here:
Why is a motorcycle's neutral between first and second gears? (6 answers)
Closed 6 years ago.

On motorcycles with manual transmissions, the shifting gears goes (down to up) like this: 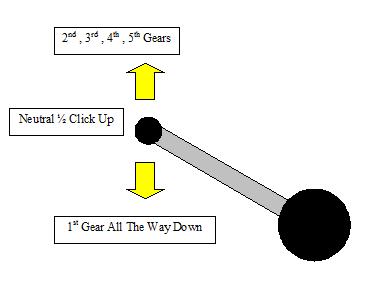 What is the logic behind this? Wouldn't it be easier in this pattern:

Look at it this way, the sequence is indeed linear - 1-2-3-4 and so on, with the neutral sitting in-between 1st and 2nd gear.
Which means, to shift to neutral from 1st gear (or down from second), one has to gently nudge the shifter into neutral, else it would directly jump to 2nd gear.
This is desire-able as one generally doesn't need to shift to neutral while riding/driving. In-fact, accidentally shifting to neutral while in motion can be understandably unsafe.
One of the advantages of sequential transmission is that one only has to think in terms of shifting up or down. I personally tend to forget which gear I'm in especially during multiple downshifts while slowing down. Removing neutral out of the picture and cleverly hiding it in between gears solves this problem effectively as one wouldn't un-intentionally fall into neutral with a committed click of the shifter.
Even if you did, you can shift to your desired gear by moving the shifter in the same direction as you previously did. Let me illustrate this with an example-
Suppose you wanted to shift down from 2nd gear to 1st and you didn't end up rocking the shifter down* all the way. You realize this and quickly press further, in the same direction to drop to 1st. It is one motion.
With the pattern you suggested, which was indeed used in older motor-cycles, if you accidentally miscalculated and dropped to neutral (being the lowest in order) you'd have to rock the shifter in the opposite direction to shift to first. This would require you to re-place your foot in the correct position wrt the shifter to achieve this. 2 movements in opposite directions. This is definitely slower.

Chilljeet has a good answer, but it's also partially a safety thing. When you're slowing down to a stop, you're clicking down in the gears until you can't click down anymore. If the bottom gear was neutral, you're a sitting duck until you can get back in gear if someone is coming up behind you at a high speed. You need to be in gear and able to react immediately in this situation.

Not the answer you're looking for? Browse other questions tagged motorcycle shifting gears engine-theory or ask your own question.

38
Why is a motorcycle's neutral between first and second gears?

38
Why is a motorcycle's neutral between first and second gears?
1
Why my bike shows petrol missing before 2000 RPM in all gears?
5
Shifting on a motorbike by preloading
5
Difficulty of shifting down to 1st while moving (manual)
3
How do automatic cars rev match so quickly when up shifting?
3
Transmission or engine Problem?