How easy (is it possible) for an amateur to change the drain tube of a motorbike fuel tank?

I've been advised that the correct fix is to replace the entire fuel tank.

Whilst searching for a fuel tank to buy, I noticed that individual drain tubes and breather tubes are available, and I wondered:

Trouble is, as far as I can tell, these tubes are inside the fuel tank, and therefore impossible to get to. Or are they?

IF, the internal tubes have corroded within the tank that would be relatively serious. The interesting piece is, how would they corrode. As far as I know, almost ALL the fuel tanks on modern bikes use copper for this overflow. It runs from the lip above the filler point, down through the tank to a nipple on the underside of the tank (or in the case of Kawasaki's) to a nipple under the front of the seat on the top side of the tank towards the rear.

Here is a standard Honda Fuel Injected tank design cutaway. This is for a CBR, post '06. 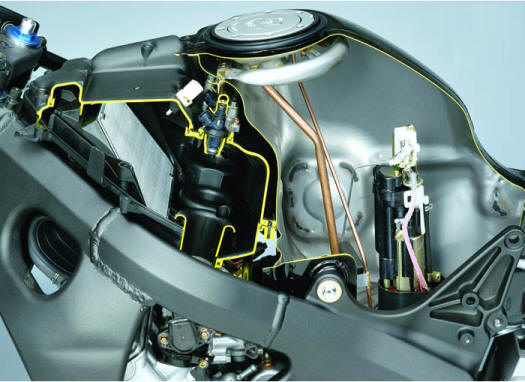 You can see the two tubes running through the tank. The larger one is the overflow and it's made of a copper and nickel alloy.

The question is, how can it corrode?

It has some of the best general resistance to aqueous corrosion of most of the alloys. It also, when used in a fuel tank, has an epoxy coating....as does the rest of the fuel tank.

After thinking about this for a minute, the idea that the tank coating has been stripped out of the tank keeps recurring to me. Those tubes just don't corrode with the epoxy lining, nor does the tank. It's steel and would turn into a shell of rust and post-apocalyptic dysphoria pretty quick. Imagine hitting the dew point everyday with a low fuel level and lots of atmosphere inside the tank. Water droplets, tiny ones, form on the inner tank surface and then you get rust.

Therefore, if I'm right, the tank has been stripped using that standard commendation, with a water/acid mixture. It removed the epoxy coating off the copper. The copper became exposed to oxygen and began to....that's right...oxidize and degrade over time.

Buy a new tank. You can't plug those nipples. If the line internally is broken and gas from inside the tank can exit that broken copper line, you fuel is essentially exposed to the atmosphere and whatever sparks, fire or any other ignition source the rest of the world is exposed to. Think static electricity here, with a low amount of fuel and lots of airspace in the tank. It would create a might fine explosion worthy of any virul youtube video. The exit of that line is near an exhaust pipe, right?

Throw it way, get a used one on Ebay from a seller with a good rep. Sorry for the bad news. 99% non fixable.

I believe you are correct in saying the tubes are inside the tank. What the manufacturers did was ran molded tubing through the tank and it sounds like those tubes in your case have rusted and corroded.

What I would suggest in your situation is just plugging the inlet for the overflow by the filler, and the overflow outlet which comes off the tank. You may be able to use some rubber nipples to achieve this.

This will allow you fill your fuel tank till it's full, and keep it in there. The issue now, however, will be that if you overfill your tank the fuel will run out over the top.

I got same problem here on my 2013 CBR 250R too and I fixed it without changing the tank. The filler drain tube that runs through the tank got corroded from inside and opened a hole into the tank leaking petrol down the drain hose. Unfortunately, the hole was on the bottom end so all of my fuel gets drained. What I did was 1. Scrubbed the rust off using some copper wire. 2. Cleaned the dirt, grime and petrol inside of the tube with some brake cleaning fluid. 3. Applied some epoxy adhesive to the outside of a flexible plastic tubing of proper thickness. 4. Ran the epoxy coated plastic tube though the corroded drain tube from end to end. 5. Waited till the epoxy cured.

Basically I added a non corrodding plastic lining to the metal tube with some epoxy. My petrol leakage stopped and problem solved.

Can be fixed, You can replace the breather pipe, ie video: https://www.youtube.com/watch?v=zFej6OKdt4k , do it at your own risk, tank need to be clean

Not the answer you're looking for? Browse other questions tagged honda motorcycle fuel-tank or ask your own question.

5
Fuel leaking out of drain tube
4
How to remove all the fluid out of my motorcycle fuel tank?
6
How to find the cause of sudden high fuel consumption of a motorbike?
2
How come I can put in more gas in the tank than possible?
1
Where do the intake/outtake tubes go on a motorcycle coolant reservoir?
2
Is it recommended to leave fuel in the tank of a non-running motorcycle?
2
How to drain the fuel tank on a first gen (2000) SV650?
6
Any techniques to remove rust from inside fuel tank without removal
1
Diesel engine fuel return pressure — how high above the engine can the fuel tank be